Economic and Political Fallout with Mars Square a Stationary Saturn on September 29, 2020

Tuesday, September 29, 2020, Mars in retrograde exactly squares Saturn exactly as it is going stationary direct.  Tension, stress.  Resisting the flow of change is not always the best thing, as hard as it may be.

It’s interesting because both planets are in the signs of their rulership. You’ll also notice that at about 8 am CDT the Moon will be at the exact midpoint of Mars and Saturn, which could be a pivot moment in itself. 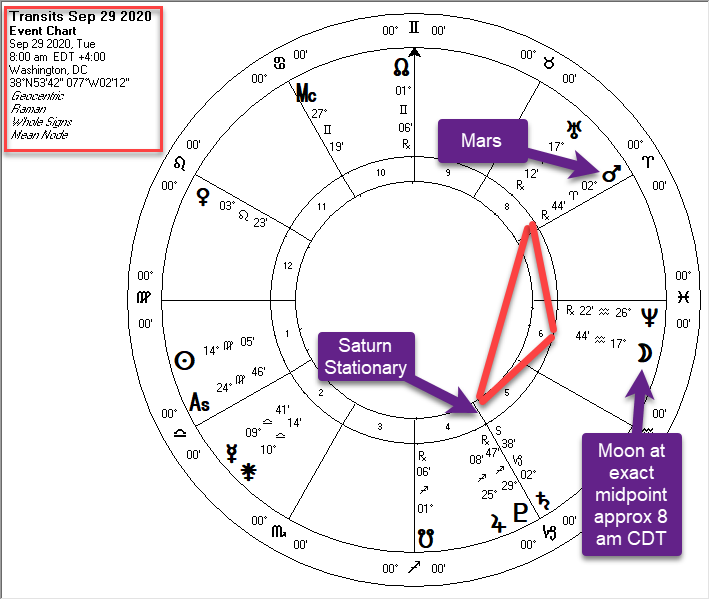 I see this as significant not only in itself, having two malefic planets so tightly align on a planetary station, but also because it re-activates the inaugurating astrology of 2020, which is has proven to be so awful already.

I’m referring to the tight conjunction of Jupiter, Saturn and Pluto in early sidereal Capricorn in square to Uranus in Aries in mid-January.

While it does not necessarily trigger the chart of the US, it does focus tightly on President Donald Trump’s Venus-Saturn conjunct in the twelfth house in Cancer.  While on the surface this could look like a bad thing, this is possibly Trump’s greatest point of resiliency.  Vipreet Raja Yoga, it is called, when the planets of two malefic houses interchange rulership; notable in chart of people who have manifested great success in life.

And, why not?  Success is the ability to come back again and again, which Trump has manifested many times, defying even certain criminal prosecution.

So, as I alluded to in this month’s predictions page, as this newsletter is published we are building up to the peak of this configuration, and I’m sure next Tuesday will be a watershed of stress with possibly a breakout/breakdown at that time.

The Earth itself is prone to mirror these configurations, such as with earthquakes, storms, or other types of situations.  In the human realm, this is the point where conflict/powerlessness is transcended and good things happen, if only because of the negative conditions which surrounded it.  Here is yet another example of nothing that ever happens is “bad” at all.

If the chick struggling to break out of its shell doesn’t summon the strength and will-power to do it, it would never survive anyway.  We all face our tests, individually and collectively, and it’s a striving spirit which drives evolution along.

Evolution may be getting a kick in the butt in the not too distant future.