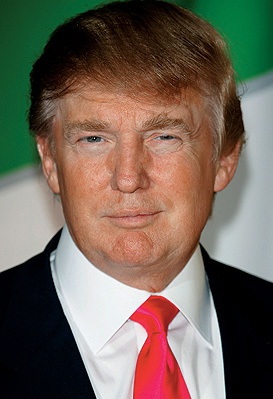 Donald Trump is in the running for the office of US President in the 2016 elections, currently he is leading the pack with quite a good distance between him and his competitors.  He’s running on his alleged business acumen and success as a real estate entrepreneur to “Make America Great Again”.

A look at the Donald Trump Vedic horoscope (June 14, 1946, 10:54 am, Jamaica, NY, AA data) can help us to discern between the hype and the reality, and perhaps whether it is “time” for Trump to be President, or not.

Starting with his rising sign, he has a Leo ascendant, which is apropos for the media star that he is.  Power and control are important issues for Leos, as they have a natural leadership ability.  Trump’s ascendant, disposed by the Sun (the Sun ruling Leo), falls in Gemini in the eleventh house.  Trump’s leadership power extends through his ability to communicate, analyze and negotiate his way through life.

The Sun in the eleventh house is the first indicator of his career and financial successes in life (ruler of the ascendant in the house of material gains.)  However, the afflicted condition of that Sun being of very low degrees in the chart denotes some of the problems which have affected his public perception and the up and down nature that his finances have exhibited in earlier years of his life (bankruptcy in the 1990’s.) 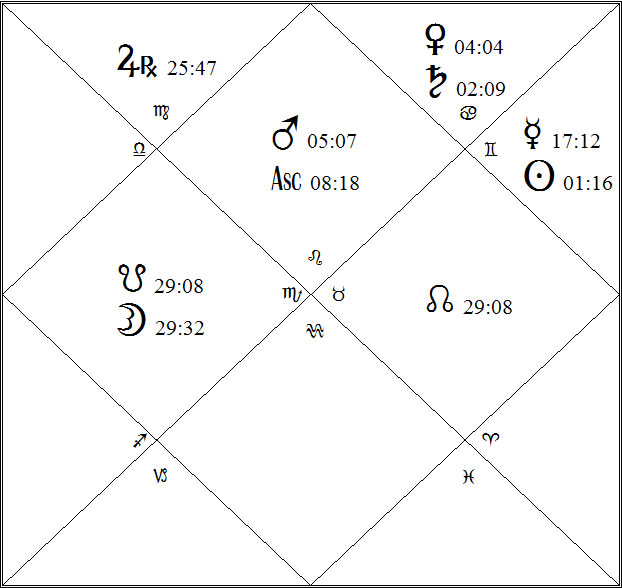 An afflicted Sun in a chart will not necessarily have any problem in wielding power, but it will come out as dysfunctional; i.e. overly aggressive, micromanaging, or domineering.

When you drive hard constantly, there is no room to maneuver if you go down a wrong path and unforeseen problems could really stop you.  Consequently, Trump’s career has had its ups and downs, as much as his finances as is his reputation.

Trump also has a powerfully positioned, but astrologically afflicted, Mars in the first house, reinforcing therefore his impetuosity and zeal to win, but also the ability to be his own worst enemy. However, Trump’s Mars is also flanked by benefic planets (shubakartari yoga), which helps him to channel Mars’ strident energy beneficially .  His Mars also in the navamsha of Taurus, a financial sign, but also Mars’ detriment. So it’s a “bad” Mars but favorably configured; i.e. he’s a successful but he’s not exactly loved by all. 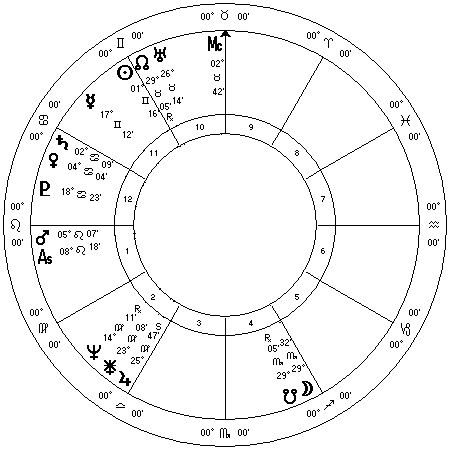 should also mention that his famous head of head of hair is very much corroborated by his Leo (lion’s mane) rising sign!

It could be said that for someone with an afflicted Sun and Mars like Trump, winning can become a means to ego-validation; feeling important and powerful may compensate for a deep internal insecurity and/or sense of weakness.

Success, especially material success is also corroborated by Jupiter in this chart in the second house of finances and money matters.  Jupiter is the planet of good fortune and growth, and this portfolio has certainly grown over his lifetime.

Even though Jupiter is debilitated in the sign of Virgo in his chart, Trump was in fact born on a Jupiter station (when a planet stops moving in the sky for a short period of time before it switches to either direct or retrograde motion—and which is typically gives great emphasis of that planet’s nature in the individual’s life), giving him an enhanced Jovian ability to rise above misfortunes.

Since the second house also denotes how one expresses themselves in life, a debilitated Jupiter in the second house then explains how his life (and current presidential run) is characterized by grand-sounding, optimistic, but also glib and simplistic promises and rhetoric.  Politicians live and die off of simplistic and ground-sounding rhetoric as a rule anyway, and in this way he is no different. Debilitated Jupiter here will also explain is flip-flops on issues such as abortion, gun control, taxes and Hillary Clinton. 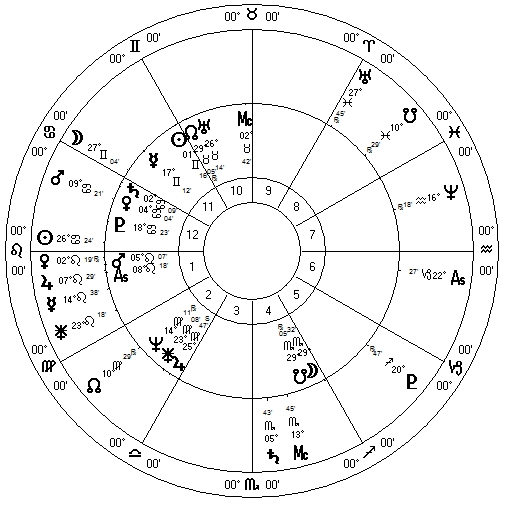 There’s no small amount of aggression that comes through his mouth either, courtesy of debilitated Mars and Sun in his chart (along with Jupiter above as noted) helping to explain his current campaign style consisting of many grand promises, but also not a little vehemence and ridicule directed towards other presidential contenders of both sides.

A debilitated Sun, Mars, and Saturn would corroborate his rise through connections to organized crime.  Plus, an afflicted Jupiter (in detriment in Virgo) in the second house, denotes that things are not as they would seem regarding money and finance in his world.

The Moon in aggressive and intense Scorpio at the bottom of his chart does not give him a lot of compassion in life either, but does highlight his style of helping others by prodding and cajoling others in seemingly mean-spirited ways.  Scorpio Moon also reinforces the notion of a high stakes financial orientation.

Speaking of the Moon, Trump was born on a full moon, which means that he has the full power of the illuminated Moon in his chart, giving him great personal magnetism. Further, the Sun, Moon, and Nodes all line up very closely which means he was born on a lunar eclipse.

So that bright full moon just referred to above was suddenly darkened at a time close to his birth. Further yet, all of his Vedic planets fall to one side of the Nodal axis, which is kala sarpa yoga, which indicates a powerfully unique individual. Trump has quite a unique set of configurations in his chart.

Having Saturn as the ruler of his seventh house of marriage, in clear debilitation in Cancer in the twelfth house conjunct Venus, confirms his well-publicized martial ups and downs, as well as a potential misogyny and propensity to secretive affairs. Venus in the twelfth house ruling the tenth house of reputation further corroborates the love-hate nature of his public perception.

I also tend to think it indicates that all is not as it would seem with Donald Trump; there could be many backroom deals and hidden elements to his life that could very well compromise his standing in the world if they were let out.  Elections are more and more scripted than ever it would seem.

A lot of politicians and world leaders share this twelfth house accentuation in their chart.  Seeing as world politics and maneuverings are always rife with intrigue, deceit, and skullduggery; that is no surprise.  It is questionable even if they are the ones in control.  If you see a lot of twelfth house accentuation in a politician’s chart, you can almost readily assume that he or she is a puppet of someone else.

Having said all that, Donald Trump does not distinguish himself much from the other contenders to the Office of President of the United States.  If he wins will he do anything to really help the nation, as opposed to a very small minority that resides at the top of the financial food chain?  Likely not.

What does the immediate future hold for Donald Trump? 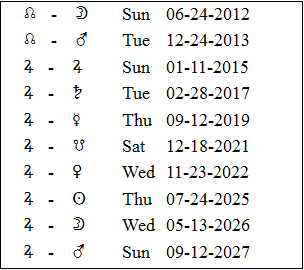 He really is on an astrological upswing, as of January 2015 he entered a 16 year Jupiter dasa, which means his financial world could grow to an even greater degree as well as all other types of fortunes.  His Jupiter debilited in the sign of Virgo may present health challenges, but also losses through speculation, and being very vocal in a very broad and ideologically verbose way.

This coincides also with transiting Jupiter just having entered his Vedic first house for a twelve month period and then moving into his second house for another twelve months this time conjunct his natal Jupiter.  He certainly could be thought to be riding the crest of a wave that is going somewhere through 2017.  Ambitions are appropriately high as well as the risks overall.

In 2017 transiting Pluto will also be squaring his natal Jupiter, many of the worst temptations of power may be brought to bear upon him, as well as their consequences. He may reach for too much, but he’s also in a 16 year cycle of perpetual luck.  Why not run for president?

Trump also has a sade sati period coming up, sort of a Vedic equivalent of a major Pluto transit, now gaining its intensity and which will peak in January, July and September of 2017.  Sade sati is the period of Saturn transiting the twelfth, first and second houses from his Moon; it is a very challenging seven year period.  This in itself epitomizes the grueling 18 month run of a presidential campaign, facing all sorts of mud slung at you, and maybe slinging some mud yourself.

Since Trump is a full moon person, sade sati also means that Saturn will be directly aspecting (and trying to constrict/focus) his natal Sun.  I see this configuration as something that could go one of two ways:

Number 1 is the desperation “Hail Mary” hopes of his supporters; number 2 is the more realistic outcome in my opinion.

What goes out, karmically comes back.  As we get past the 2016 elections then Trump moves into some more serious astrology including a Saturn sub dasa starting in February 2017 as shown in the dasa timeline above.  So all the name-calling, race-baiting, gender-slamming, issue-flipping, and fact-blurring that he’s sent out may come crashing back in just a year or so to his regret.

Trump’s fortunes definitely take a reversal just past the new year of 2017.

Then in 2019 as he shifts into a Mercury sub dasa things may lighten up some. At the time of this writing transiting Jupiter is right on his natal ascendant, so he is right in the media hype spotlight, warts and all.

Note: in this article. I am indebted to the astrologers Joni Patry and Kenneth Bowser in their analysis of Trump’s forecast astrology.