The astrology of Jeffrey Epstein has amazing features to it.These are features that reflect the current lurid allegations that he is being criminally prosecuted for.  Looking at Epstein’s horoscope is of course not an indictment against him because he should be considered innocent until proven guilty, but they do give us a deeper understanding of the situation.

There is no published birthtime for Epstein, however, through a few simple Vedic techniques I was able to rectify his chart (determine the actual time of birth).  My work shows him with a birthtime of 3:15 am in Brooklyn, NY, on January 20, 1953.

A brief bio of Jeffrey Epstein was that of a bright teacher of physics and mathematics who made a very early and successful switch into the field of investing, making a very steady social climb and accruing in at least a billion dollars in wealth (reportedly).

Epstein also enjoyed a unique freedom from any severe criminal prosecution from various crimes including that of molesting under-age girls in a serial fashion and possible sex-traffic of said young girls.

Epstein has been associated with intelligence agencies, allegedly an asset of the Israeli Mossad; and having many connections to the rich and powerful in society and government, he may have been instrumental in getting those powerful individuals into possible blackmail situations in order to get their cooperation. 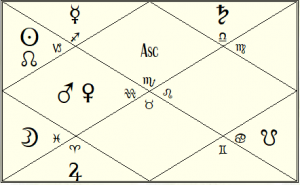 This 3:15 am birth time gives a Scorpio rising horoscope, an astrological sign associated with obsessive behaviors potentially, including that of sexual pathology.

The deep sexual theme continues with his rising sign’s disposing planet, Mars, in very tight conjunction with Venus, the planet of love and pleasure.  The sexual theme goes even deeper when we see that Saturn disposes Epstein’s Venus and Mars in Aquarius, from Libra in the twelfth house.

To explain, Saturn has influence over the tight Venus/Mars conjunction because it astrologically rules the sign they are in, Aquarius.  Saturn’s position in Libra and in the twelfth house incorporates love and relationships again (Libra) and the secretive and dysfunctional behaviors (the twelfth house).

Saturn is exalted in Libra, that is, it functions very well in this sign, which would reflect the “commanding” influence he has over these young women.  A dignified Saturn in the twelfth house also indicates good fortune in matters of seclusion and/or incarceration.  That is, with this placement Epstein seemed to enjoy great success in his secretive affairs with young women, and he was able to evade significant prison time as the twelfth house is also the house of prisons in the horoscope. 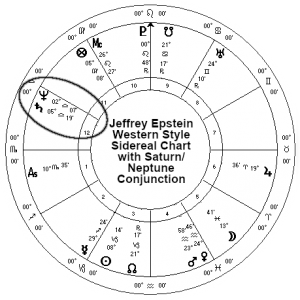 There is a certain slipperiness with Saturn in this position, as the twelfth house has a very intangible, rationality-defying nature to it.  Ethics, a function of Saturn, here become more susceptible to alteration or fluctuation based on prevailing biases, ideological or political expediencies.

Having Mercury, the planet of thought, debilitated in Sagittarius also does not help with the clarity or honesty of situations.

He can almost slip out of situations like the sneakiest of ninjas, or just to vanish from them like a fabled wizard, if you will.

The conjunction of Saturn and Neptune is typically an indicator of very deep pathology and self-deception that is very hard to change.  So, old (and bad) habits are exceptionally hard to die.

The twelfth house is the house of secretiveness, being the last house of the horoscope, it is “far removed” from the normal occurrence of things; i.e. hidden away.  The twelfth house is associated with many vices including that of having affairs, and of being involved in activities that have a secretive or clandestine nature to their operation.

Epstein’s island in the Virgin Islands is another example of “getting away”.

Boundaries are indeed in issue with Jeffrey Epstein with his Moon in Pisces, it may be very easy to self-justify his behaviors, especially so when that Moon is disposed by a very driven/ruthless Jupiter in Aries, as it is with his chart.

Jupiter here in the sixth house apparently is good for giving him “good luck” with legal situations, possibly some arrogance to think that he can get away with anything; but that only makes his potential downfall all the worse.

The North Node (Rahu) in Capricorn in the third house points to his aggressive ambitions in life, and the South Node (Ketu) in Cancer to his necessary subtlety to navigate his path, but maybe he just gets too “touchy-feely” in the process.  The navamsha chart sheds more light on the sexual proclivity, but that is for another deeper-looking article, if it warrants to be written. 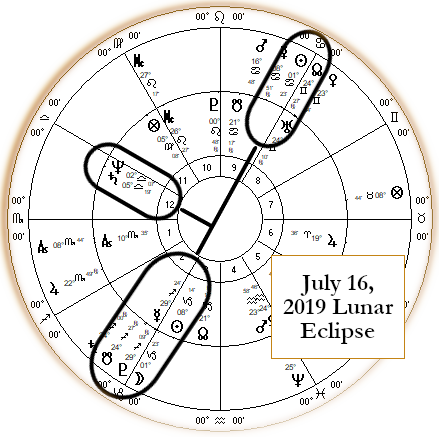 The July 16, 2019 lunar eclipse (just 10 days after to his arrest) that was tightly aligned with transiting Pluto was right over his debilitated Mercury and in square aspect to his natal Saturn and Neptune conjunction.  The skeletons in the closet are brought out into the light.

The transiting node axis is also right over his natal Uranus, and he has been cast into the headlines with meteoric notoriety.  Uranus denotes radical shifts in life, and one could say that his life has taken a sudden severe turn.

As Epstein moves into September 2019, he moves into a Saturn sub-dasa of his Mars dasa; this is a particularly harsh combination.  In early 2020 transiting Saturn moves into the same sign as his Sun, which reinforces the impact of Saturn’s karma-paying action.

The universe gives us opportunities to evaluate the good and bad in our lives; such as with Epstein now. With all the public scrutiny on the private details of his life, Epstein now has the chance to reconsider his ways and repent; or else he can double down on the old ways, vainly fighting to the end.  A lot of ego-relinquishing is required, of course, proving that we are always our own worst enemy.

But will he outwit the jailer once again?  That depends on if that jailer is himself corrupt.

Being a billionaire and possibly having the names, photos, and videos of very powerful people in very compromising situations might be something here which he can parlay for his benefit again. 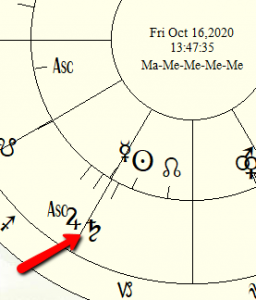 During this period of the early 2020’s Saturn will be moving through the bottom of his chart, conjuncting his Mars and opposing his natal Pluto, and transiting Pluto will be in square to natal Saturn, so we can see some actual karmic debt-reckoning. Relentless Saturn may win in the end, bringing those Libran karmic scales back into balance once again.  Remember that Saturn is exalted in Libra.

Speaking of the end, as I look at Epstein’s eighth house, the house that indicates length of life, I see that it and its planetary ruler Mercury are rather weak.  Maybe as he moves through this Saturnian transit gauntlet, maybe his life-energy-allotment will have run out (especially so as he seemed to like to burn the candle at both ends).  That is, he’ll go into prison, but his time on Earth may very short at any rate.