I’ve done a rough rectification of Vladimir Putin’s chart starting from the posted birth time on Astro.com of 9:30 am to approximately 9:05 am, on October 7, 1952 in St. Petersburg, Russia.  Of course, this analysis will be using the zodiac and techniques of Vedic astrology (and my preferred Raman ayanamsha.) 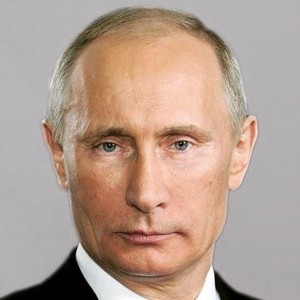 A few words about Putin in general before beginning the analysis.  The ultimate question of whether Putin is actually the man “in charge” of the Russian government, boils down to the banking presence in the nation.  If the central bank of Russia is indeed associated with the Bank of International Settlements (the global central bank of central banks, and the most powerful cartel of influences on the planet today), then it is the bankers who indeed hold all the financial reins of power in Russia, and Putin is basically their front man, the mask that the secretive banking cartel hide behind.  Wikipedia indeed indicates that the Russian central bank is connected to the BIS.

But if Putin indeed has wrested control (or a portion of control) from the bankers, which some commentators say he has, then Putin is indeed the “real thing” and acting rather independently, and presumably taking a very nationalistic (what is good for Russia is good for me) stance. I am personally of a mind to say that he is still a puppet of the banking cartel, based upon the fact that he’s “packaged” for the media with his bare-chested photo ops and overall he-man persona propagated in the various medias, which all seems somewhat “staged” to me.

Bear in mind, that I’m just an astrologer who likes to keep up with the real state of affairs on the planet who finds some astrological corroboration of my perceptions of things; but I’m an amateur, if you will, so take everything here for what it’s worth. We live in a matrix, a great part of which is literally scripted by a shadowy elite who move the pieces around globally like pawns on a chessboard.  Nevertheless, don’t take my word for it, do your own due diligence and decide for yourself if that is true, or not. 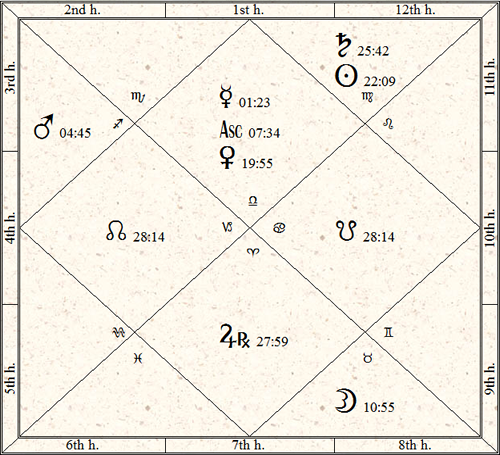 My chief rectification point is that right now (late February/early March 2014) Vladimir Putin has been in the global spotlight, his face literally in newspapers, magazines, and webpages all over the world.  He’s collectively demonized by the Western press, while his popularity is currently soaring in Russia.

In short, he’s in the spotlight like never before. With my rectified birth time of 9:05 am this would put the transiting Node axis right on his natal ascendant, an extremely personal point in anyone’s chart.  This birth time would also put Putin’s Moon in an Aries navamsha, which would be more apropos for a former leader of the KGB who is now President of Russia during a time of global tensions.

While I would have some trouble reconciling this exalted Venus in Libra in the first house (upon  looking at this face, he would seem to very much lack the usual Libran charm and friendliness), but it would put benefic planets in strong positions in this chart, which would indicate an easy rise to success and prominence in his life. This chart would put his Sun in the secretive (former KGB spy in West Germany) twelfth house, along with Saturn.  This could mean there is more to Putin than meets the eye, and/or that his basic power in life (represented by his Sun) is effectively subverted and controlled by others, such as a clandestine group of directors. 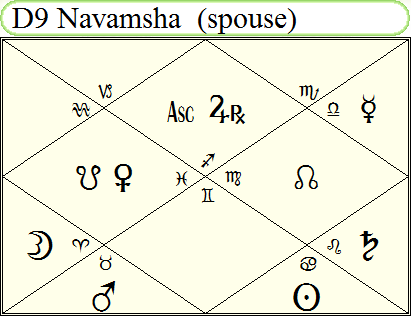 I’ve seen a lot of twelfth house accentuations in the charts of politicians, who mostly are merely the front-men for powerful influences, of whom they are basically puppets for. Looking at Putin’s Sun further, it is conjunct Saturn in sidereal Virgo, which would corroborate his reputation as being very intelligent, shrewd and cunning (again, as per being the head of the KGB.)

The Sun falling in the navamsha of Cancer could attribute his association with the nation and people of Russia, with his strong nationalistic appeals he is caretaker for the Russian legacy, as it were. Having the Sun conjunct Saturn could also give one quite a serious demeanor, even with Libra and Venus in the first house. An exalted Moon in the eighth house (in Aries navamsha) gives him great vitality, long life, and overall staying power, which would be quite formidable in the face of his detractors.  Certainly allowing him to play the bare-chested he-man role well.

The Moon as the tenth house ruler in the eighth house would indeed give him great cunning and manipulative power to succeed in life.  His Mars in Sagittarius in the third house would corroborate these points as well. The real interesting story about Putin are the upcoming transits to his chart. 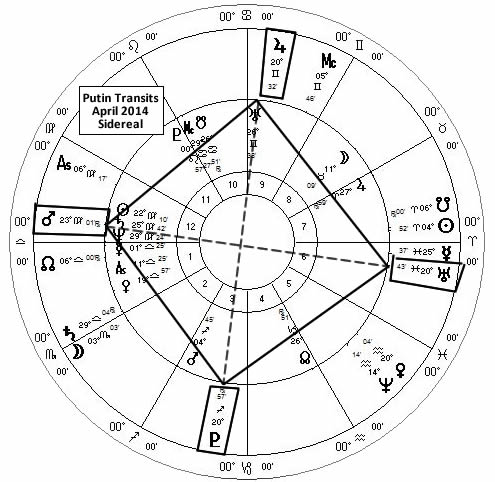 As one can see in the graphic posted above, transiting Mars will come into conjunction with his natal Sun and Saturn in sidereal Virgo in April 2014, and at the same time one can see a grand square beginning to form with transiting Jupiter, Uranus, and Pluto upon Putin’s key planets, his Sun and Saturn.

April 2014 may be a significant time in the life of Putin, possibly corroborating important actions he will be taking with the Ukraine and Crimea situation, and then the larger consequences from them.  In June 2014 Mars will resume direct motion and reconnect with his Sun and Saturn along with transiting Uranus.  Will the emerging new cold war between Russia and the Western powers suddenly get a lot hotter? One can also see transiting Jupiter is about to enter his whole sign tenth house in sidereal Cancer, which may be a very strong time for Putin as Jupiter is exalted in Cancer.  Then in mid 2015 transiting Jupiter will conjunct his natal Pluto, which may have his ambitions soaring to the sky.

Could Putin be entering a period of political ascendancy? In the 2016-2017 time period Jupiter will then be in the region of his natal Sun and Saturn, which again may raise his ambitions and zeal to action to extraordinary levels. Transiting Uranus and Pluto in square to each other will be in direct aspect to his natal Sun and Saturn all through 2018.  Puppet or not, it would seem that we have not heard the last from Vladimir Putin.