Astrology of Trump 2024 Campaign for President 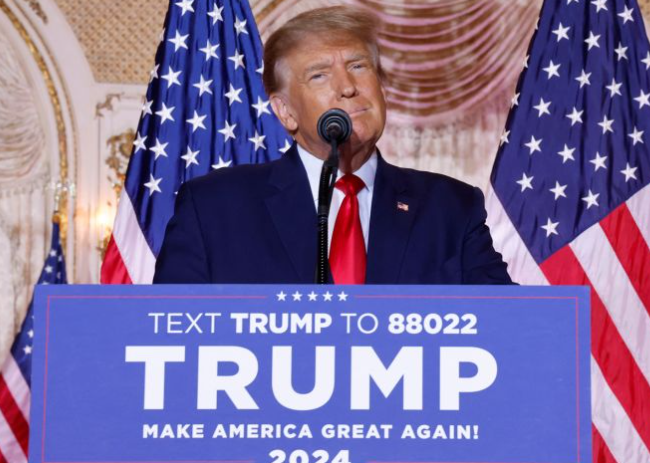 On Tuesday, Nov 15, 2022 at 9:23 pm in New York City, Donald Trump officially announced his candidacy for the 2024 US Presidential election.  It was a very tame, safe and scripted performance, but also low energy.  This is a different Trump, version 2.0; but we’ll see if former version comes back.  Trump the incumbent in 2024 will be much different from the outsider firebrand of 2016.

It will be hard to recapture that energy, especially after four years of political reality, the deep state, the economy and the pandemic.  The honeymoon is over and the Republican party may be looking for another leader, maybe one a little less volatile, unpredictable and disruptive.  The predicted “red wave” was little more than a ripple, and the very PAC-monied intensive campaign on the Republican side may have backfired some.  Not that the Democrats had anything new or amazing to say either.

It’s not good for anyone really, the Democrats, the Republicans or Trump himself.  He’s tarnished by the events of January 6th, nearly all of his attempts to cancel out the victory of Biden have been thrown out of court, and he and members of his family are facing multiple legal challenges which could effectively shut his financial empire down.  He will have a strong political base, but the equation will be much differnt this time around.

As I will explain through this article, there may be successes for him yet, as foreshadowed through his astrology, but it could also be must more of the same of which played from the four years of his previous term.

But enough of all that political speculation.  Let’s step back and let the stars tell their story.

The Astrology of the Trump Announcement for 2024

Basically, at the time of his announcement on November 15 Mars was retrograding over his Sun and North Node (Rahu) in his natal chart, which was in tight square to Neptune, which also was making hard aspect to his Sun-Moon-Nodes configuration (Trump was born on a lunar eclipse). 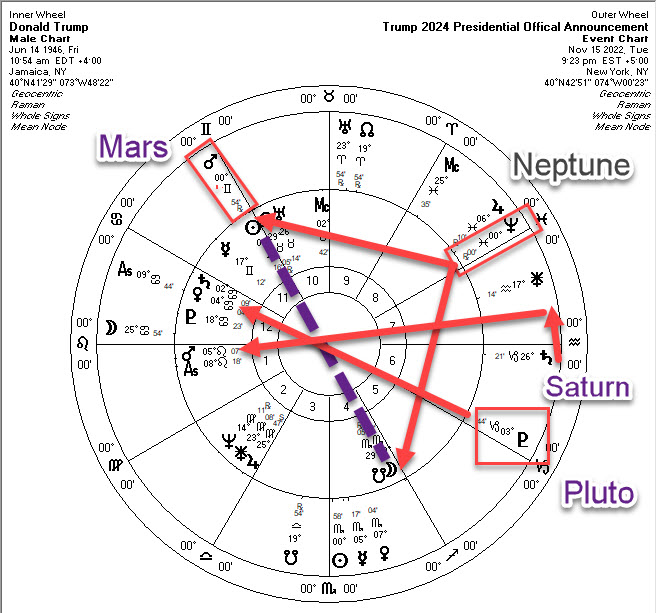 Mars-Neptune means deceived-action, or actions with questionable or tenuous ethical underpinning.  In a positive slant it can mean very inspired and/or self-sacrificing actions or initiatives; but that would hardly seem to be Trump’s mode.  With these planets bearing down on his Sun, Moon and Nodes, he could be inspired, but more likely be his own reality-denying delusions.

In the announcement chart the Moon is in partile opposition to Saturn, manifesting a somber mood at best and not the kind of hyperbolic kickoff that would be desired.

Trump also has the continuing astrological stressor of transiting Pluto in tight opposition to his natal Venus-Saturn conjunction in the twelfth house.  The twelfth house is the house of self-undoing, and Venus is the ruler of his tenth house, the house of reputation.  Therefore, this is a configuration (natally) of reputational self-undoing or just having a maligned reputation, whether it’s earned or not.

In more relatable terms, Pluto is activating and bringing to light the skeletons in Trump’s closet.  Justice comes back more than ever.  The Trumpian power to duck and evade justice may not be enough this time, but the story is yet to be played out.

In early January 2023 Saturn moves into sidereal Aquarius, which is the seventh house for Trump, putting Saturn into direct aspect to his natal Mars and in Vedic tenth house aspect to his Moon in Scorpio.  The stress and pressure only increases now, adding to the aforementioned Pluto aspect on his Venus-Saturn.  As a 74 year old man it won’t be an easy road, but of course with Mars in his first house, the ego is ever pushing on with it’s elusive goals for validation and supremacy.  So, it only adds fuel to his fire.  I hope he eats less cheeseburgers and diet sodas during that time.

Pluto on Venus-Saturn (and transiting Saturn in his seventh house) would also indicate some relationship reaconings forthcoming; his marriage and secretive affairs brought to light. Secret affairs, as such, do not necessarily mean the sexual or romantic kind, it could also indicate a “behind closed doors negotiations” coming to light.

November 2022, the start of his campaign, Trump begins a new Venus sub-dasa of an overarching Jupiter maha dasa.  A Venus sub-dasa is good on the face of it, but as previously mentioned here his Venus in not particularly well-situation in his chart, so there could be a loss for every gain personally and professionally.  This sub-dasa occurs simultaneously with the peaking of the transits from Neptune, Saturn, and Pluto mentioned above.

So, Trump may have his work cut out for him. 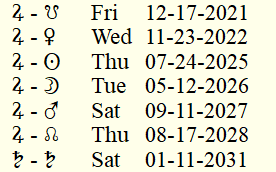 From Venus Trump moves into a Sun sub-dasa in July of 2025, six months into his new term if elected.  Trump’s Sun is particularly well placed and strong, therefore his Sun sub-dasa should be appropriately good for him, especially in terms of authority, success and recognition and personal power.  All of those things come with a caveat; authority, success and power can be misused.  However, I would say that he may be able to more readily tap into that luminous power that charismatic individuals have.

As he moves into Jupiter-Moon in May 2026, things may turn sour in ways for Trump, as the Moon rules his twelfth house of losses and self-undoing, and it itself debilitated in his chart.  Closing out his term conceivably with the Mars sub-dasa from Sept 2027 to Aug 2026, there could be misfortunes and strife.  Trump thrives on strife, but it’s not assured of being a pleasant thing to watch.

As with the Venus sub-dasa above, Jupiter-Moon dasa/sub-dasa combination can have positive things, but with the debiliated nature of those planets in his chart, things don’t seem to turn out right, there is something off or awry with them, tainting the results.

In my observation of the previous Trump term, during such times he would descend into petty squabbles blaming others for his misfortunes and at the same time during his distraction other parties would move in and enact the agenda; that is, the so-called deep state, those unelected movers and shakers in Washington.

Trump had a unique opportunity in his first term to actually do something different, if ever so slight, but such opportunity was wasted on petty in-fighting and distractions.  In effect, he just became another vessel for the established powers that continue their control of policies.  The rest was just show and entertainment branded as politics, it would not seem to be much different during a second Trump term.

In the near future I’ll be presenting the chart of Ron Desantis, especially to see how his chart interacts with Trump’s and see what his astrology portends.

The Astrology of Teflon Don

A few words I think should be said regarding Trump’s chart.  He has risen to greath heights, even after falling to great depths because of a few select features of his chart.

First he has Mars in Leo in the first house, his ego is quite the driver.  He has a fundamental need to be perceived as strong and accomplished, and he likes to surround himself in kingly oppulent settings.  He also has a certain configuration in his chart, called vipreet raja yoga, a planet ruling a malefic house in another malefic house.  It means sort of “ruling through adversity”; one might be involved in nasty things but ultimately they get away.  It’s an astrological get-out-of-jail card.

I think most astrologers in their dislike of him tend to forget this point about his chart.  His political demise has been predicted again and again, but he always seems to get away, dodge consequences, and make great headlines.  One could easily expect the same things to happen again.  Extramarital affairs, cheating people out of millions, to lie constantly, call for an insurrection upon the US Capitol, make personal profit from his job at the White House to the tune of millions, and generally run roughshod over the US Constitution with outlandish impunity, or get elected again.

It could be complicated to say the least under federal and state indictment at the same time.  I just would not be totally surprised.

Trump thrives on adversity, he’s like an agent of chaos.  It’s just us small-brained humans that don’t see the actual order in the chaos.  For good or for ill, that is what he is.  I shudder to think though what further chaos could be unleashed in a second term than with his first.