No need to get into the nitty gritty of the astronomical details, but I go into it somewhat in my sidereal/tropical article. 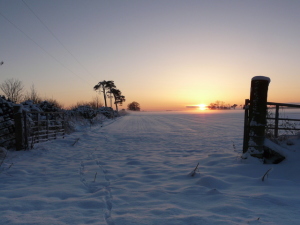 Many people feel down or depressed during this time of year, and some will say it is because they are sensitive to the idea that they are supposed to be “full of joy” during the Christmas season.  The fact is though that we receive the least amount of solar energy at this time, it gets dark quite early, and much colder than at other times.

So people are naturally “gloomy” at this time; it’s not necessarily a social expectations issue, it’s more biological than anything perhaps.

Symbolically the winter represents the twilight, death and subsequent rebirth of man (especially if you subscribe to the idea of reincarnation).  It’s the end of the old cycle (the old man) and the commencement of the new cycle (the new man, now a babe).

So the actual birth of the man Jesus Christ could have occurred at any time, but the church fathers apparently chose December 25, a day suspiciously close to the Winter Solstice.  This time of year corresponds to other so-called pagan holiday/celebrations: the Sol Invictus of Roman times, the Norse Yule, Hanukkah, and Kwanzaa among many others.

Christianity has so many pagan foundations it would startle most Christians, with their own religio-centric views.  Truth is most faiths and philosophies borrow heavily from others that preceded it, seeking to steal the copyright, as it were, as their own.  Slap a new name and face on it, and you got a new movement to challenge the status quo with.

When you get down to it though, all faiths and philosophies have an identical message: God exists, He/She took on flesh to be a teacher, teacher struggles against the disbelief and demonization of the people he/she came to save, gets killed, rises again, his/her followers start a movement borrowing a lot of the concepts from the old, which are now repurposed for “modern” times.

The Social Control Aspects of Christianity

When you think if it, the symbolisms of the Christian faith are very manipulative and geared towards control of masses of people.  Christ was not a king with honors, he was lowest of the low, born in a stable, became a carpenter and always mingled with the “poor”, he was persecuted, tortured and killed in a very ghastly crucifixion play.  This is supposedly what all Christians are to aspire to.

I’m definitely not here to condemn Christianity, because at the same time the Bible and Christianity itself portrays what I would call true spirituality, but it is also the most tampered with in my opinion.  It occurs to me that if you wanted to control the vast masses of society and keep them docile and sheep like, the above image of their God would be a very convenient way to give spiritual legitimacy to a life of hardship, poverty and backwardness which the Church and feudal lords at that time profited very greatly from.

Churches, especially ones of long-standing corruption and decay like the Catholic Church, which in my opinion keeps the masses in the dark about the true nature of spirituality, sin and what happens when you die, would need to perpetuate such a sort of religion/myth for their own continued well-being and financial power.

The gruesome image of Christ nailed to the cross can keep the masses in a perpetual state of fear, submission and a perverse fascination/horror that would effectively prevent them from being “bad” but also at the same time keep them from progressing in a true spiritual way.

So I hope I haven’t ruined your Christmas celebration but I wanted to publish some of my recent thoughts about Christmas, just to present another look at the holidays, and make you think a bit.

The Real Life of Jesus