The December 2020 Grand Conjunction of Jupiter and Saturn: A New “Christmas Star”, the Eclipse of December and What it Means 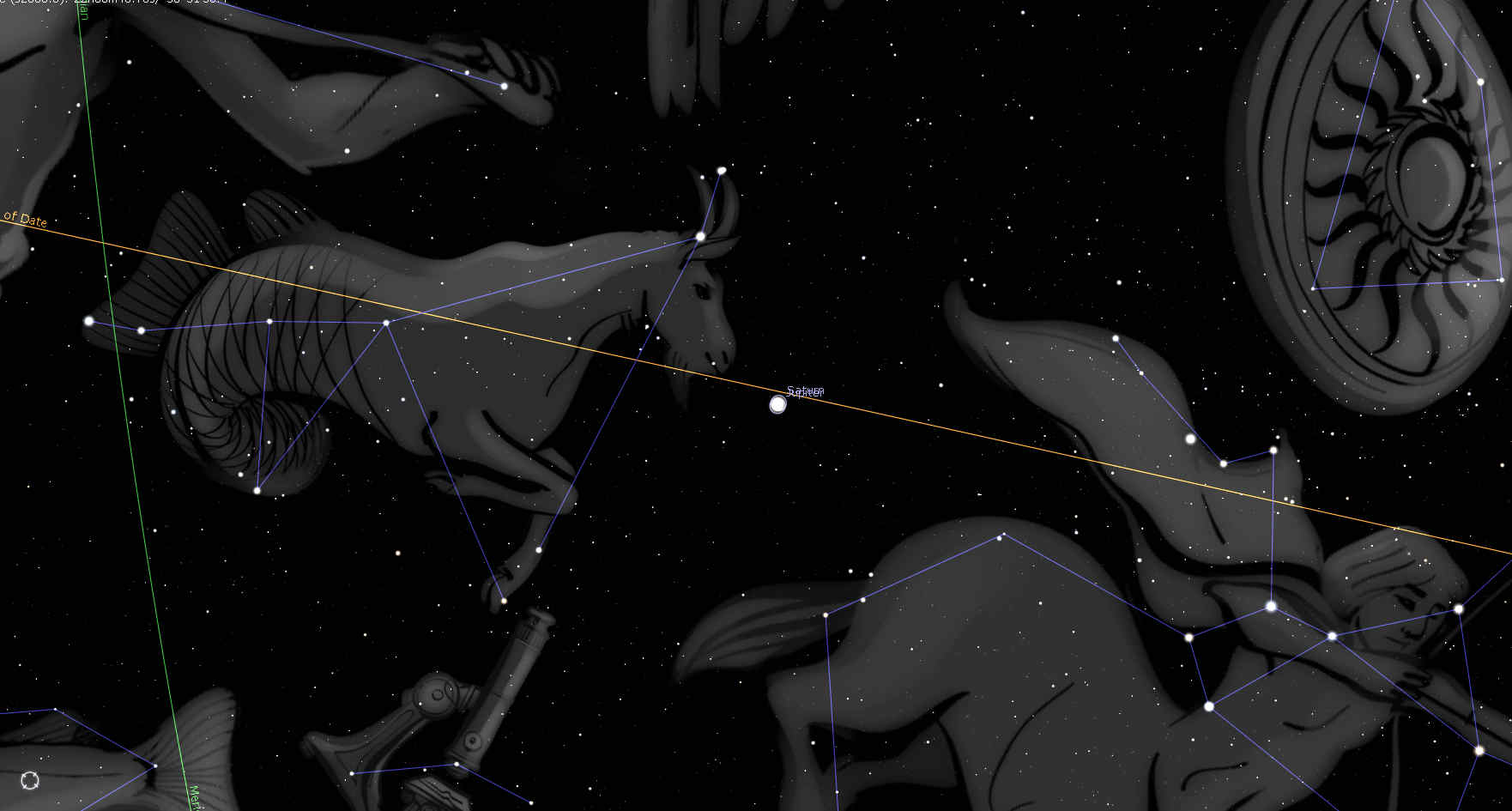 Jupiter and Saturn conjunct on Dec 21, 2020 in early sidereal Capricorn, just at the sea-goat’s nose. CLICK TO EXPAND

2020 has definitely been a landmark year, mainly thanks to the Covid-19 pandemic. There have definitely been some signs in the heavens reflecting the event and the subsequent after-effects of it.  In astrological lore the every-twenty-year conjunction of Jupiter and Saturn has been called the Grand Mutation or the Grand Conjunction.  It will also be a new “Christmas Star” as well.

History of Past Grand Conjunctions

This particular Grand Conjunction of 2020 is further compounded by the very close conjunction of Pluto to Jupiter and Saturn; it is very rare.

The last time this happened was 1981, which was a significant change in the US and world economy, basically the start of a grand run-up of deficit spending and wealth concentration and disparity, which to this day has continued and may be the single most critical factor in today’s economy.

The last time before that was in 1882, which corresponded to what Mark Twain called “The Guilded Age”.  Digital History describes this period as:

In the popular view, the late 19th century was a period of greed and guile: of rapacious Robber Barons, unscrupulous speculators, and corporate buccaneers, of shady business practices, scandal-plagued politics, and vulgar display.

It is easy to caricature the Gilded Age as an era of corruption, conspicuous consumption, and unfettered capitalism. But it is more useful to think of this as modern America’s formative period, when an agrarian society of small producers were transformed into an urban society dominated by industrial corporations.

The late 19th century saw the creation of a modern industrial economy. A national transportation and communication network was created, the corporation became the dominant form of business organization, and a managerial revolution transformed business operations….

With the wide square of Uranus to the super-conjunction at this time also, it would surely be a significant turning point. To adjust and adapt new economic patterns will emerge and a macro-shift is inevitable, perhaps with a more equitable distribution of wealth to the populaces. 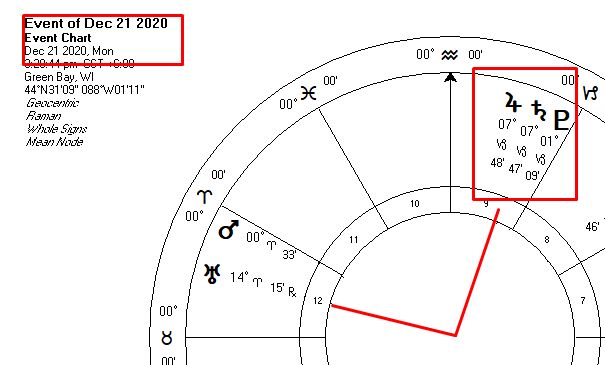 This was a grand configuration which took place over the course of the early months of 2020 and formed a peak in March of that year, with a final last stage happening in December 2020. I will post images of the charts of the peak dates at the very end of this article.

If you look at the highs during our times, as well as the lows, the disparities between them on an economic, social and political standpoint, a “correction” definitely seems in order.  The coronavirus pandemic has become the effective pin that has popped the bubble of inflated, delusory greatness that the world has been afflicted with, most especially that of the United States.

The Meaning and Effects of the Grand Conjunction of 2020

I choose to call this an epicenter in time, this is a time of extreme pivot, and the full impact of it may not be fully experienced until some time after.  We have yet to know the full impact of the pandemic and the subsequent aggravated social discontent and suffering.  It certainly seems to have hijacked Donald Trump’s chance at reelection, as of this writing.

We have no idea of how the vaccine roll-out will go, and we are certain to have a tidal wave of bankruptcies, foreclosures and other economic repercussions to come over the next few years.  The system seems almost at the collapse point because large pool of consumers (who buy the stuff that corporations make) will no longer be able to buy things any more resulting in the contracting of the corporations.  The government can’t bail them all out indefinitely.

Basically, less money will be flowing around and consequently fuel for sustained economic activity.

Whether it is Phoenix rising from the ashes of a embattled civilization, or a prolonged period of setback and decline like the fall of Rome, it could be said that now is that epicenter in time marked quite precisely by the time-lords in the sky.

Donald Trump has very little to do with this, he’s just a manifestation of the times, the end-product of the age, a rapacious strawman, if you will.

As Jupiter and Saturn conjunct there will appear almost as one, making what some are calling a “Christmas Star” like the story of the Three Wise Men of the Bible following the star in the East searching for the new born king.  There will be only six minutes of degree of declination separating them, making the two planets look as one, perhaps making a star of hope for humanity.

Jupiter and Saturn conjunct astrologically represent forces of expansion and contraction in equilibrium, which seems like a good starting point for any endeavor.  However with the additional factors of Pluto and Uranus, the collapse and societal discontent seem much more of skewing effect; complicating things being an understatement.

The Eclipse of December 2020 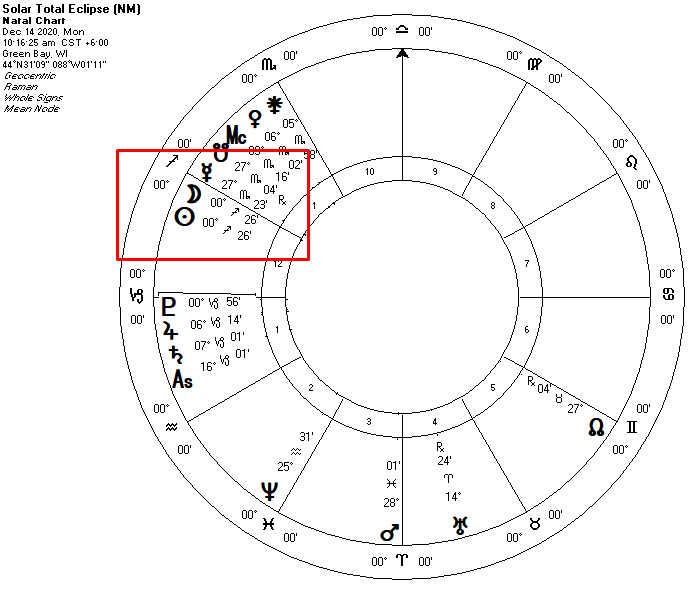 This particular eclipse falls in early sidereal Sagittarius and is disposed by a debilitated Jupiter in Capricorn, which is conjunct Saturn and Pluto.  It is a total solar eclipse and is very close to transiting Mercury.

This is a particularly intense and pivotal event in my mind, NOT THE LEAST FOR DONALD TRUMP HIMSELF.  It is “bad” insofar as it signals a collapse of end of something, disposed by a debilitated and otherwise afflicted planet.

The conjunction with Mercury indicates new thoughts and ideas, or adjustments to ideas.  The trine of Mars to Mercury indicates a rapidity of action, an enthusiastic and purpose-driven stride as people hit the ground, such as the new Biden-Harris administration.

I will be publishing a new post regarding this eclipse and President Trump.  To be posted shortly.

Tuesday, Dec 1
With the Sun conjunct the Aldebaran/Antares axis and Mercury on the Pleiades in aspect to Neptune we may be in for some intense but potentially creatively rich experiences.

Saturday, Dec 5
Nothing good should be easily won, or not without losses to make it actually meaningful.  Hope waxes beautifully.  (Sun semisquare Saturn, Venus trine Neptune)

Tuesday, Dec 8
Mercury conjunct Antares, the Heart of the Scorpio, opposite Aldebaran, the Eye of the Bull, can lead to some important revelations and connections.  Don’t be intimidated by something seeming to be too intense or disturbing.

Wednesday, Dec 9
Personal integrity and honesty may be at issue today.  Don’t use (self-) lies as a crutch. Motivation and energy may seem difficult to find.  (Sun square Neptune, Mercury semisquare Jupiter)

Thursday, Dec 10
Some surprises, but somewhat of a grueling day of problem coping.  (Mercury semisquare Saturn and biquintile Uranus, Moon opposite Mars, Moon on Spica and Arcturus stars)

Friday, Dec 11
Set out.  Sometimes the most important thing is just do follow your impulse.  Important, pivotal developments in life and connections.  (Sun trine Mars, Moon opposite Uranus)

Monday, Dec 14
Solar Eclipse
Changes in love signaled.  Disorientation.  Seek conscious refuge in the heart center as the cosmic adjustment occurs, even though a strong sense of urgency is all around you. Refined realizations. (Venus conjunct Juno, Moon conjunct Mercury, Mercury trine Mars)

Tuesday, Dec 15
Endeavor to take a look at your relationship life, see where there may be changes you can make with them, avoid/bypass toxic patterns.  (Venus sextile Saturn, tridecile Neptune, opposite Pleiades, Mercury sesquiquadrate Uranus)

Wednesday, Dec 16
Exciting, compelling and seemingly promising relationship situations emerge; which may allow you to review and decide to make adjustments in your relationship/emotional life.  (Moon conjunct Pluto and Jupiter, Juno sextile Jupiter)

Thursday, Dec 17
Early on some much appreciated clarity can be found with you and others.  (Moon conjunct Saturn)

Sunday, Dec 20
Inspiration, but take to the next phase. Find peace by letting go of anything you might have considered to be yours, you, or important.  (Moon conjunct Neptune)

Monday, Dec 21
Winter Solstice
First Quarter Moon
Zeus, the Olympian, and Kronos, the Titan of the old order, meet and discuss the next twenty years of how the silly mortals will live.  (Jupiter conjunct Saturn)

Tues and Wed, Dec 22-23
Ursid Meteor Shower (22)
Feelings and motivations run deep and scary-like. Don’t be foolish, of course, but just go with it.  You might be taken to psychological places you need to go to and perhaps have deferred or denied in the past; all of which applies to relationships as well.  (Venus sesquiquadrate Mars and Pluto, Mars square Pluto, Venus conjunct Antares and opposite Aldebaran)

Friday, Dec 25
Christmas Day
A good holiday to get out of the box of interactions and life-patterns.  Connect with that real center of you and act therefrom.  (Mercury trine Uranus, Venus biquintile Uranus)

Thursday, Dec 31
This is day of reflection of the past year, but also resolve to capitalize on the lessons learned.  A fitting astrological end to 2020, as the Moon sweeps past the mighty Capricorn conjunction.  (Moon opposite Pluto, Saturn, and Jupiter)

The Major Phases of the Jupiter, Saturn, Pluto conjunction in Sidereal Capricorn 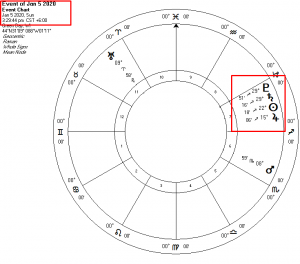 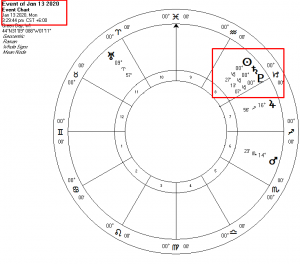 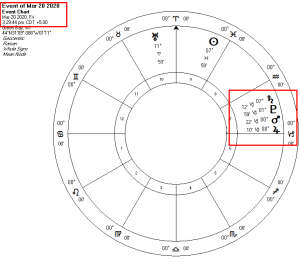 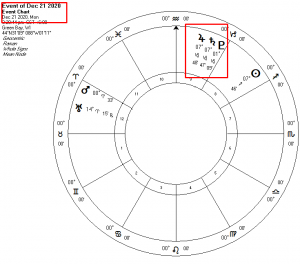