Conan O’Brien is a popular late night television host in the US, he has always enjoyed success in life from the years of his earliest adulthood.  However he has gone through some challenges recently, and I endeavor to highlight and possibly make sense of them through his Vedic horoscope.  O’Brien’s birthtime (April 16, 1963; 1:48 pm, Boston, Ma, chart below) has been determined to be accurate as taken from his birth certificate, so results should be pretty reliable.

First off, he is Leo rising (sidereal), generous and extroverted, and he’s even got the “wild head of hair” which Leos seem to have.  Being a performer certainly can use the Leonine qualities as an asset to get ahead.

The ruler of O’Brien’s Leo ascendant (the Sun) falls in independent and forward-pushing Aries (which is the Sun’s exaltation also).  This means that his ascendant ruler is exalted, which is one of the basic success indicators in astrology.  Further, the Sun is in the ninth house, which is considered the best placement for any planet.  O’Brien’s comedy style could be considered to be impetuously Arian, being very spontaneous, excited and frenetic.

I think O’Brien’s quirkiness of style can also be attributed to his Sun being afflicted in a few ways.  First of all, the Sun itself is relatively early in its sign (6 degrees), and its disposing planet Mars is itself debilitated in Cancer, which is itself disposed by a debilitated Moon in Capricorn.  The underlying Capricornian disposition to O’Brien’s main chart features points to some of his self-deprecatory style of humor, and also of some of his career obstacles that he has encountered.

The Capricornian influence also points to a very strong work/success ethic all throughout his life, which has allowed him a very solid form of success.  In fact his first years on the Late Night with Conan O’Brien were very iffy, always under the threat of cancellation by the network.  But in the third year the show started to take off, which points to Capricorn’s delayed-success motif. 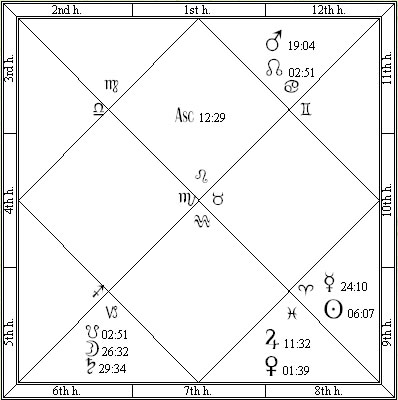 Conan’s loss of the Tonight Show spot to Jay Leno, was not necessarily due to lack of talent or ability to get ratings but he seems to have been the victim of legal maneuvering.  Since Leno’s resumption of the Tonight Show ratings have not shown any improvement over O’Brien’s tenure at that spot.  I attribute this set back to his career to the debilitated nature of his natal Sun, which on the surface appears to be quite auspicious.

Looking at his chart in various ways:

From the Moon (Chandra lagna), the ruler of the tenth house is Venus, which is in the third house (associated with performers) and conjunct Jupiter giving rewards and his bubbly quality.  The Sun as the eighth house ruler in the fourth house indicates some very powerful and at times intimidating influences in his early life most likely from his parents (his mother was a lawyer and father a doctor).

From the Sun (Surya lagna): the tenth house ruler Saturn is in the tenth house, which is powerful but Saturn is very late in the sign indicating some of the quirkiness to his reputation and how success was “blocked” from him to an extent.  Again there is a debilitated planet in the fourth house, Mars, indicating some possible issues with parents and developments that spring from his early years. 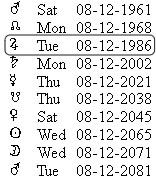 If I take a look at his dasas (Vedic predictive periods), his career life seems to be right on track with his chart cycles.  As I said earlier, O’Brien enjoyed success early in his life, high school forward; but his television career coincided with the advent of his Jupiter dasa in 1986.  (shown at left). It was relatively soon after the commencement of the dasa that O’Brien became a writer on Saturday Night Live (1987).  Jupiter’s cycles coincide with good fortune and growth and his stature certainly flourished with his involvement with Saturday Night Live, The Simpsons, and then his first show Late Night with Conan O’Brien. 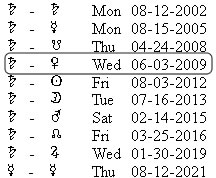 Fast forward to 2009; Conan was enjoying great success at NBC and was offered the coveted Tonight Show spot being vacated by Jay Leno.  At this time Conan is in the maha dasa of Saturn and in the sub dasa of Venus (shown at right), and transiting Jupiter is also on his Moon.  Saturn moderately well placed and in the tenth house from the Moon; and Venus is not a very strong positive influence in his chart.

As a matter of fact , O’Brien’s Venus sub dasa starts very close to the premiere of his Tonight Show run (6-1-2009); it was very uncanny  timing.  Sadly, Venus’ mild to non-existant strength in his chart reflected the lower ratings and ultimate cancellation seven months later.

Looking closer still, the sub-sub dasa running at the time of the cancellation in January 2010 was that of the Sun (below), which is mentioned previously here as seeming very good but basically afflicted.  This was a not-good time in his astrology and you could say things went south for his career, not permanently of course because he has just started a new show on TBS. 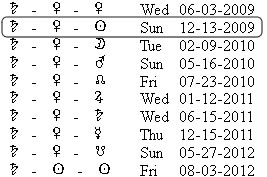 As I can see it, O’Brien’s course looks relatively stable until about 2012 when he enters a Sun sub-dasa (heretofore mentioned with its problems) and transiting Saturn will be in opposition to his Sun.  He could have a few things going for him with Jupiter also conjuncting his Sun, but the 2012 time frame could be seen as a sort of plateauing action.