What is Vedic Astrology: Introduction

Vedic astrology, which is also known in India as Jyotish, has been gaining popularity in the Western world in the last few years. Yet, it is still very much out of the awareness of the western consciousness. This series of articles will give some helpful background and a basic understanding of the main concepts and techniques of Vedic astrology. 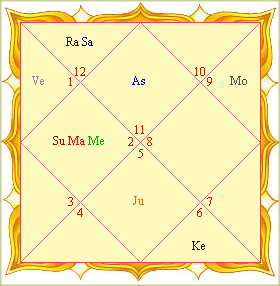 Vedic astrology is a very powerful and useful form of astrology for natal chart character analysis, forecasting future trends, and in relationship compatibility; and it is very similar in nature and presentation to the Western school of astrology, sharing the same planets, signs, and houses. We won’t strive to go into exhaustive technical details, but after reading this series you should have a good understanding of Vedic astrology, what it does and how it works.

With the use of some of its Indian or Hindu phraseology, Vedic astrology has reputation of being very complex and hard to learn, but that is not so at all. As a matter of fact, it is much simpler in many ways than the Western system; then again in other ways it will get a bit more complicated.

Vedic astrology differs from Western astrology in it’s use of the sidereal zodiac, a zodiac which is based more on the actual positions of the stars in the sky, as opposed to the seasons as does Western astrology. Vedic astrology is steeped in the Vedic Hindu traditions of India, which claims to have a very, very long history attached to astrology; some of which Western scholars would disagree with.

Vedic astrology is similar in interpretation to the planets, signs, and houses of horoscopes, but has unique takes on and some minor differences with the same Western interpretations.  It also uses a lunar system of 27 Moon mansions, called nakshatras; and it is a more simplified version of reading planetary aspects from the Western style. Horoscope interpretation involves the use of yogas (planetary configurations), planetary strength measurements, and divisional charts (called varga charts) which add more flavor and depth to natal chart interpretation.

For Forecasting, in addition to transits, Vedic astrology also uses a very powerful planetary period system (called dasas), which helps form a more comprehensive and relateable story for the individual, while also adding depth and richness to the astrological reading All of these points and more of Vedic astrology I will be covering in greater detail in this article series:

The intent of this series is to help the western reader better understand some of the Vedic astrology concepts used on a regular basis in this Star World News website, possibly stirring them to investigate and learn more on their own.