Trump Presidency: Ethics and the Law in the Spotlight

Has the dust settled from Trump’s “surprise” victory on November 8th?  It doesn’t seem like there will be any stopping of surprises any time soon with this election.

Surprise for sure, myself included, I thought Hillary Clinton had a slight edge.

What I said officially here in Star World News that the race was too close to call looking at the astrology charts, as well as other issues in the campaign. However, I said that I thought Hillary Clinton was a little favored by the powers that be; i.e. those that count the votes, etc.

Turns out that Trump took a decisive lead early on and won commandingly.  Hillary called Trump personally to congratulate him.

As of this writing Hillary Clinton actually won the popular vote by a margin of 2+ million votes, and some of the Electoral College say they are going to vote contrary to their districts.  Results are in the process of being contested in key battleground states, and there is a remote chance of change in the election.  But more on that later….

I have no doubt that the electoral process in the US is a very corrupt system and the idea of a fair and true election in the US is delusional.  Voter suppression, manipulated results through “black box” voting machines, gerrymandering of voting districts, the manipulation of the media and the influence of Super PACS and Big Money is going make the election more of a “selection” than anything else.

That is, a “selection” that has given the Republican party a majority in the White House and Congress.

It appears now that most, if not all, of Trump’s campaign promises that got him elected have been thrown out in just two weeks after the election, and is being replaced by a pretty standard Republican/neocon pro-business, pro-war, and political cronyism agenda.

Trump still holds out that the first thing he will do is pull the US out of the Trans Pacific Partnership (TPP), but Trump also said that the first thing he would do is put Hillary Clinton on trial, so we’ll see where that all goes.  Trump is highly changeable, but he said originally he would re-negotiate the agreements, which leaves a lot of wiggle-room for him to claim he fulfilled his promise.

It’s beginning to look like the campaign was a lot of hyperbolic promises to get the votes, but that actual policies implemented after the inauguration will be something quite different.

As I’ve said in previous articles making predictions in elections with astrology is a lot of perceptions and bias, especially in a close race.  What is a certain win for one astrologer/predictor can be a obvious loss for another.

But I thought, when you win an election, especially in this highly corrupt political climate, do you actually “win”?

It seems for the last 50 years the person in the Oval Office is the center of attention, but they are not really the center of power.  They become pawns and puppets to the larger powers that be, such as in Wall Street, the corporate and banking world.  They become the unfortunate targets of all the criticism and derision, but the real movers and shaker get away scot-free, and they come back again and again “advising” administration after administration.

So let’s take a look at Hillary Clinton.  Because she “lost” the election, she will not be in the hot seat taking blame for all the decisions and generally getting pushed around by the big money and powered interests who put her there in the first place.  She has been “liberated” from making all that karma, maybe she really “won” by losing.  She won her immortal soul back, that is. (Or maybe now she’s freed up, so that there is nothing obstructing the return of karma).

Trump, on the other hand, is now going to have to be the smiling (or scowling) face that could be in a very unenviable place, taking credit for all the bad things that could happen under his presidency which he may not have much control over.

It’s actually an incredible opportunity for him; but he’s backed into a corner, he’s going to have to either really be a leader, a new Julius Caesar, or he’s going to be tool of others.   We shall see how it goes.  It didn’t end well for Julius Caesar though.

In all likelihood business could boom under the notion that the Republican White House and Congress will be lowering taxes on business.  Infrastructure building (badly needed) will also stimulate the economy, but until we revert to our original way of creating money by printing it through the Treasury instead of borrowing it from private banks, as has been the case for decades, more and more wealth will transfer from the lower and middle classes to the upper one percent.  Having a half-trillion-dollar yearly military budget doesn’t help either.  Stock indexes may soar, but the people who elected Trump will be the ones feeling the squeeze. 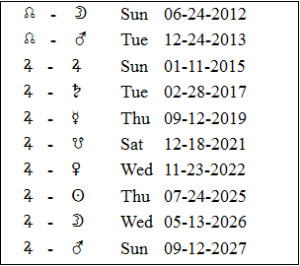 Apropos to Trump’s newly commenced Jupiter dasa (a 16-year cycle) ethics and the law are going to be important issues now for him.  Will turning his back on all those millions of voters who put him into office be a significant issue?  Will his playing fast and loose with conflicting business interests ultimately get him impeached?

He just had to cough up $25 million to settle his Trump University case. Ouch. There are more trials to come, and he’s just could be the biggest legal target in the US.

According to the image at left, in February 2017 Trump enters a Saturn sub-dasa of his Jupiter dasa for a good part of his upcoming term.  Trump’s Saturn is one of his weakest planets and therefore indicates that at this period of his life, he may be at his most vulnerable, which is not exactly the preferred thing to want for a sitting president.

Yes, I would say that ethics and legality have become very important issues in the life of Donald Trump.  So he needs to do the right thing. In politics it seems to be easy to promise the world on the way up, but once you get there then promises seem to disappear.

If he’s a “good boy” though, doing everything the program has in store for him, then he may not have much to worry about.  Skeletons rattling in his closet though might suddenly be thrust into the light.

Again, it’s all perceptions and predispositions when it gets this close.  The whole saga is yet to fully play out.  Substantively, there is much more that is similar between Hillary Clinton and Donald Trump than there is dissimilar, and the moneyed oligarchy wins again.