Trump and the USA Horoscope 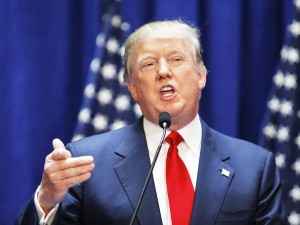 If you were to overlay the horoscope of Donald Trump over that of the USA, the commonly accepted (7-4-1776, 5:12 pm, Philadelphia, Pa) version, you are going to find some significant connections, all of which point to his fame, success, and now his current popularity in the 2016 US Presidential elections.

Endeavoring to be objective, I think both pro-Trump and anti-Trump people will find food for thought in this analysis.

First of all his amazing natal full moon eclipse (Sun opposite Moon and Node) falls within one degree of the US natal Mars, which is then in tight square to the US natal Neptune.

This means that he resonates strongly with the American sense of zeal, self-promotion, and being a go-getter.  It can also mean that he could be very militaristic, impulsive, and prone to pettiness.  The square to Neptune indicates that issues of unclear or dysfunctional nature will be involved in the aforementioned fervor.  The energy could mysteriously peter out, become enmired in errors, or the ups and downs of so-called passive-aggressiveness.  The danger here is that force implemented in any number of ways could have unreliable, ineffective, or undesirable outcomes.

Of course this is implicit in the chart of the US, touching on it’s problematical Mars-Neptune square, war have been waged for all sorts of unsavory of reasons, as most wars seem to be.

Being a billionaire, Trumps fortunes have risen and fallen at times, but through time and experiences he has become wizened in the amassing of money.  Connecting to the US chart, fortunes with Trump may have an seeming good outcome, but there will be conditionality attached or setbacks.  Hype may be tempered by realism, serving up a slice of humble pie for Trump and the nation.  However, gains can be made. 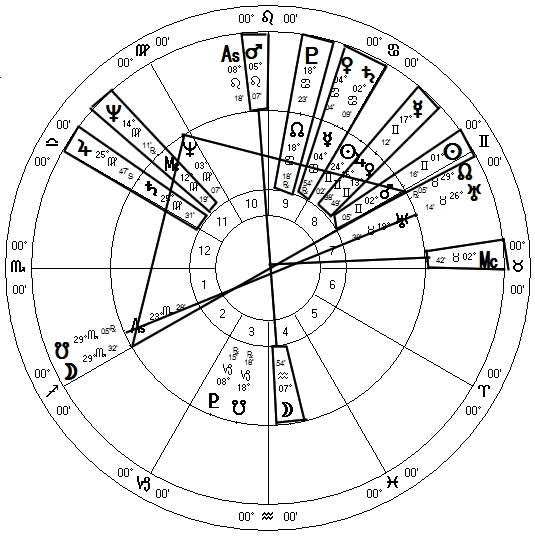 Configuration #3: Trump Mars opposite US Moon

He gets the masses riled up, he pulls out the US national passion.  Emotions though come and go, a high state of excitation can’t be sustained over time.  There will be rises and falls; constancy may be an issue.

Of course this is a classic war-like motif; a lot of people may get hurt or killed under his  time as Commander in Chief (of course the President is CIC only when war is officially declared by Congress.)

A Venus-Saturn conjunction can be rather bitter in regard to love, skeptical and vindictive.  Such a configuration connecting with the US Mercury-Pluto may magnify the feelings and thoughts intensely.  Debate may be degraded to lower levels, tinged with a lot of negativity, sarcasm, and accusation.  Not a stretch with the current presidential race immaturities and mud-slinging.  Imagine that for a whole term in office.

The US North Node in sidereal Cancer indicates a strong desire to be the caretaker for others, spreading love and warmth and a lot of abundance all over; but maybe sometimes wanting to smother neighboring nations in it’s monetary embrace (the dollar being the world’s reserve currency), and then at times insulating itself (with oceans on either side) in its own  self-protective, and some might say smug world view.

Trump’s Pluto tightly conjunct the US natal North Node indicates that he could indeed be a very rich man, profiting from the great wealth of the nation (in this case, it’s landed properties among other types of investments), and being up to his neck in any level of corruption or decadence in the process .  His actions and involvement may contribute to the ultimate collapse of our economic base as much as anyone’s.  He’s a capitalist, he loves money, and that is his pursuit.

Trump likes to shake things up.  For better or worse, he’s got a disruptive streak.  His stance is to be counter to the “establishment”, or at least that is how he is perceived.  He may introduce radical reforms, or be challenging to social norms which he may inwardly despise.  He’s his own man and that is his distinction, especially among the candidates for this election cycle.  He’s the wild card and couldn’t be anything else.  He introduces quite a lot of excitement into the situation.

The effect of this configuration are similar to the previous one with the level of excitement he introduces to the scene, as well as maybe a sense of optimism and hope which is as infectious as anything else.  It helps promote his good luck financially as well as his media attraction.

Trump potentially may be instrumental in lifting up the nation’s fortunes, in a hopefully more legitimately business-like way, and not through the murky world of currency and credit manipulation that the financial masters of Wall Street and the banking cartels do.

The idea of who and what the United States is (the effect of the Midheaven) may be subject to distortion and bias with Trump, it may have heavy pseudo-religious or spiritual affectations to it, and a sense of ultimate futility or despair that discourages activity.  A strong sense of co-dependence may mar a Trump presidency, possibly to parasitic over-class that drains the nation of vitality.

Neptune does bring sensitivity, so a Trump presidency may also bring  increased compassion to others, if only because of a shared sense of suffering or misfortune.

Would Trump be a “good” president?

If you use the horoscopes alone he seems to connect with a few legitimate indicators that he has some potential, then again there are other connections which are not so unique among candidates, i.e. the US big moneyed and corporate interests with all of their militaristic propensities, and those are not “good” at all.

Using the horoscope alone is just going to give a general picture.  At this moment of writing he has just lost to the Wisconsin primary and he is struggling to maintain his front runner status.  He will have to work very hard to insure his getting the necessary number of delegates to clinch the Republican nomination, and even then the party may just push him out anyway.

He stirs things up and maybe that is what he will do best in the election, push us all into a new political paradigm.