NOTE: This story is evolving with updates on the nuclear documents issue.  The article will be updated as developments come out as well as the final conclusions.  CB 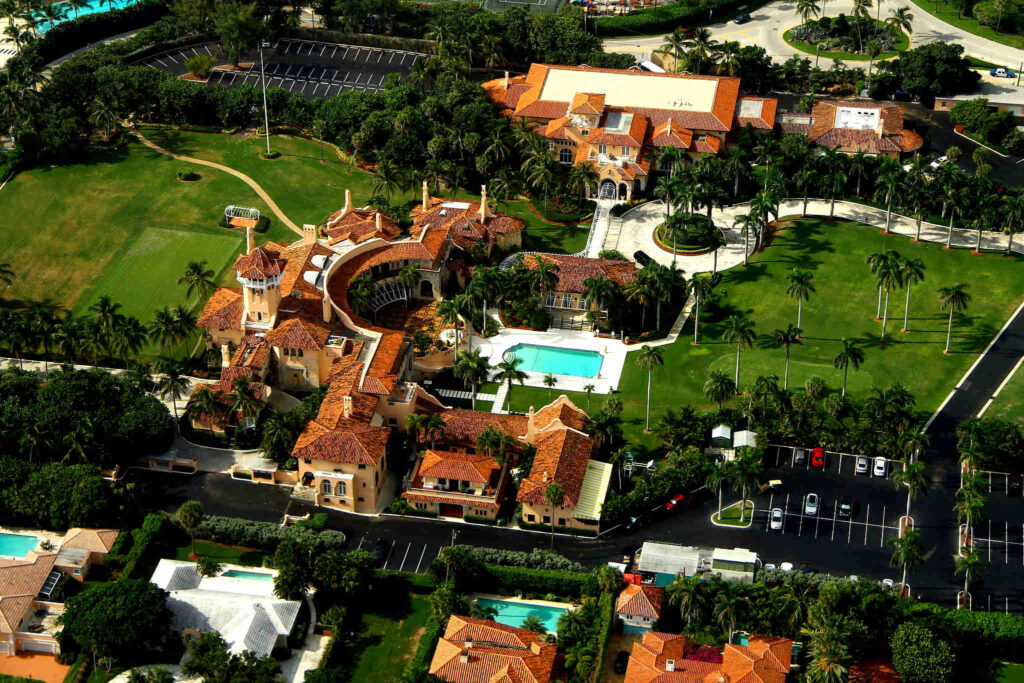 The August 9-10 raid on Trump’s home Mar-a-Lago by the FBI has sent political shockwaves throughout the western world, falling to the right or left of the issue: either Trump was negligent at best in taking government documents with him on his exit from the White House after his defeat by Joe Biden, or Trump is the victim of the “deep state” who weaponized the FBI to attempt to prevent him from running again and Trump (who never supposedly lost the election) still had every right to keep those documents.

Complicating the issue even more is reports now that the documents in question contained sensitive nuclear information, creating a national security risk. Why should these highly sensitive documents have been stored at Trump’s residence?  With Trump’s deep connections with the Saudi government this raises serious questions. The situation is yet developing and more information will be forthcoming.

Along with other impeding legal issues culminating in the life of Donald Trump; the January 6th hearings, election interference in Georgia investigation, banking and tax fraud investigations, and defamation and sexual assault allegation against him, it would just seem like there are a lot of karmic chickens in the life of Trump coming home to roost.

Trump will most assuredly announce his campaign to run again in 2024, it appears that there are formidable challenges to be faced before that occurrence.  He is still very powerful politically, but his work will be cut out for him.

The latest incident regarding the FBI raid may have actually galvanized his base and forced his potential contenders from the Republican party to acknowledge the possible abuse of power by the US government against him.  All of which in typical Trump fashion propels him to the top anyway.  This not about saving the nation or who or what is right; it’s about which player and party maneuvers best to win.

What do the stars have to say?

Trump entered his current Jupiter maha dasa in early 2015. This is the chief cycle that has brought about his preeminence and successes (as conditional as those may be), and he is moving through the sub-dasas, which will end in 2031.  Jupiter’s dasa denotes good luck, but also a lot of hype and exaggeration for him, high on the rhetoric but typically soft on the action, as Jupiter is wont to be.

His current sub-dasa is that of Ketu (Moon’s South Node), which has a distancing or separating tone to it, which has certainly been the case as he is no longer in the presidential spotlight, crowded out by up and coming figures such as Ron Desantis, his aforementioned host of legal challenges, and his “voice” of social media has been denied to him.

Within his Ketu sub-dasa Trump is about to enter an intense Saturn sub-sub dasa on August 13, 2022 to be exact (that is, if his given birthtime is accurate).  This means that from Aug 13 to Oct 6, 2022, Trump will be in a very intense scrutiny-like Saturn sub-sub dasa that has an overarching Ketu (malefic) dasa to it.

Trump’s Saturn is quite debilitated in his chart, falling in the twelfth house of secretive affairs and delusion.  Trump has not yet to my opinion mastered any of the positive twelfth house qualities: charity, compassion, sensitivity, and sacrifice.  So, he may be getting some fast-tracked humility coming his way soon.

As mentioned in other places by me, Trump’s astrology has certain redemptive qualities to it; which helps to explain his good luck avoiding certain-seeming loss or punishments.  He’s gotten away with so much, and in this case that is literally so.  However, it will not be clean, easy, or glitteringly moral as one would prefer.

That is certainly the case for his Saturn micro-dasa above, not quite so for the following one.

The next over arching dasa will be that of Venus, starting in November 2022.  Venus may seem to be a very good indicator for him, especially as his Venus rules his tenth house of reputation and success, and conjunct the aforementioned debilitated Saturn; but the meaning of the tenth house ruler in the twelfth (Venus) means misunderstood, maligned or ruined reputation, the dasa-activation of this point in this chart may indicate a real step-down in popularity (or a step up of negative-popularity), possibly brought about by bad press, legal situations, and then just by personal faults.

In early January 2023 Saturn enters sidereal Aquarius and in opposition to his natal Mars in the first house, directing scrutiny and pressure on the person of Trump himself. Saturn will be bringing out the fighter in Trump.

Transiting Pluto will also be in exact opposition to Trump’s natal Venus already mentioned above, reinforcing the negative reputational portents of his astrology as outlined above.  This aspect is dead on exact on the day of these potential esphionage developments.

You can also see transiting Neptune in near exact square to Trump’s natal Sun, creating a fairly tight t-square with his Moon and South Node (Ketu).  The meaning here is deception of the self, confusion and losses; as well as projecting those qualities onto others. 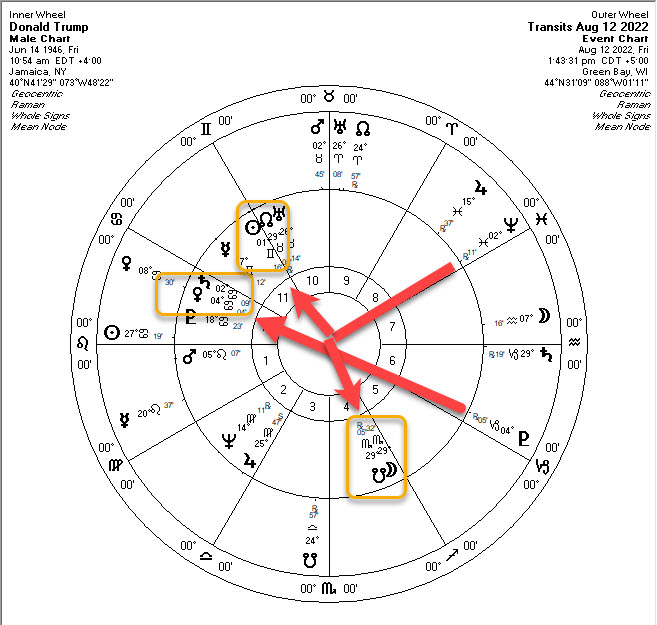 The sixth-twelfth house axis will be lit up for quite a while in Trump’s horoscope, which also indicates legal struggles.  He will have a lot to endure at least through the first part of 2023.

After that, I daresay that it will be smooth sailing for Trump.  If Biden is unable to continue on and only having to contend with Kamala Harris, a lightweight politically (to be charitable to her) and no other real Republican aside from Ron Desantis, his way to the White House again may be very open, as long as the skeletons in his closet (his legal challenges and other potential liabilities to emerge) are mitigated and the classic Trump Teflon good luck prevails.

HOWEVER, if Trump were to be embroiled into trial for breaking the Esphionage Act, then everything changes and he may well be OFF that path back to the White House.  More to come as it develops….