If you take the chart of the inauguration, which will be the official “birth” of the Trump Administration, there are a few things to see; some surprising and some not so surprising.  Then as you connect it up with the astrology of the man and the nation, a more complete picture emerges.  This may be one of the most memorable administrations ever, for better or worse. 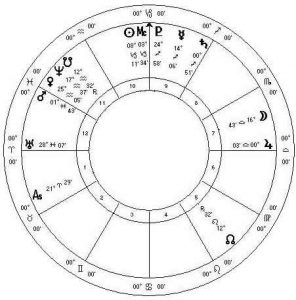 As always, the sign Aries will be rising in the chart of the US President.  Constitutionally, the swearing in always takes place at noon on January 20, so there are always two fixed things about the chart.  Aries will always be rising, and the Sun will be at 8 degrees sidereal Capricorn.

This will be an analysis using the sidereal zodiac (Raman ayanamsha) and Vedic astrology interpretation, with some Western style astrology mixed in. I endeavor to be objective and realistic in my assessment.

The Sagittarius planets seem to take prominence as they are disposed by an angular Jupiter.  Exuberance seems to be the accentuation there, America is in the process of being great again, to paraphrase Trump’s campaign slogan, and arrogance is the other side of the coin.  We’re better than you, and the details as to why that is so are not that important, we just ARE.  So get out of our way!

Venus, Neptune, and Ketu (South Node) in Aquarius are a little bit more even-handed in their approach.  Maybe ideals will be communicated with a some diplomacy, and we can see each other as brothers and sisters.

Mars, as the first house ruler in Pisces also presents a surprising turn for such a bellicose president.  Motivations are subtle and ambition can be a little more transcendent, but there could ulterior motives operational.  Mars also as the eighth house ruler in the twelfth indicates the hand of a hidden group involved with potentially murky motivations themselves.  They could also present themselves as friends but in the end turn out to act very unfriendly.

Self-deception as much as anything here will lead to our misfortune. 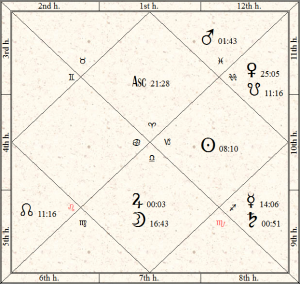 The two planets, the Moon and Jupiter, in sidereal Libra seek to bring things to equilibrium and peace, a sort of pleasant plateau.  The North Node (Rahu) in Leo in the fifth house, disposed by a raja yoga Sun in Capricorn in the tenth house, indicates successes and honors.

Ketu, the South Node, in Aquarius with Venus in the eleventh house disposed by a weak Saturn would indicate problems arising through rigidity of mindset.  Flanked by malefics (the Sun and Mars), Ketu here also could indicate problems in getting along with others as well as financial struggles.

Yet the Moon, Venus and Jupiter making trines to each other indicate successes, prosperity and happiness, at least moderately and/or for those who participate most actively in this administration; i.e. business, corporations and politicians.  But if success does indeed “trickle down” to the people, there could be some measure of it for them.

A tight square between Mars and Saturn indicates halting progress, most likely burdened by a frustrated anger that lashes out in futile retaliation at times.  Mars and Saturn dispose two main points of this chart, the Sun and Ascendant, and both are debilitated in a few key ways: early sign position, house position (Mars) and both are debilitated in the navamsha chart.

Two key weak disposing planets can indicate main motivations are prone to dysfunction, and lessen or mar the overall expression of this chart.

Jupiter in tight opposition to Uranus, widely square to Pluto, indicates a great surges of energy that are unpredictable in their outcome, but which have the effect of stimulating large groups of people to evolutionary change.

So it would seem that things could definitely be worse than what this chart portends for the United States with Trump in the White House, but there’s also room for improvement.  This is only part of the story though, inauguration charts as being subsidiary to the horoscope of the nation itself, and then also to the chart of the president who is being inaugurated.

Which brings me to this….

The Chart Triumvirate: the Man, the Nation, and the Office 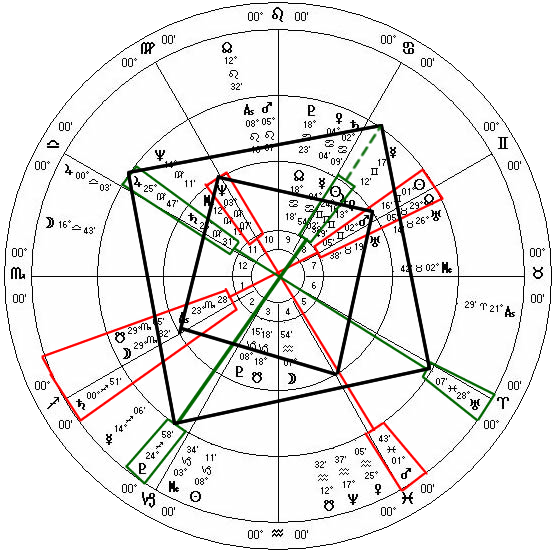 The above formidable astrology image is an overlay of the horoscopes of the US (inmost ring), Donald Trump (middle ring), and the chart of the 2017 inauguration (outer ring).

This astrology is “worse” than the George W. Bush astrology.  It almost defies description.

It is all a fairly tight and tense set of oppostions and squares between the Sun, Saturn, Mars, Jupiter, Uranus and Pluto between three horoscopes and Trump’s eclipsed Sun-Moon opposition (and the US Mars) appears to be the spine of it.

Then the Inauguration Jupiter-Uranus-Pluto t-square hangs on Trump’s Jupiter and the US Saturn. 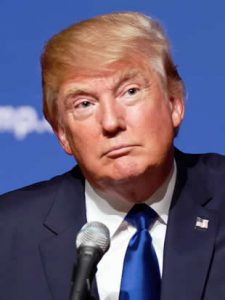 Inauguration Mars-Saturn-square square-conjunct Trump Sun-Moon-Nodes and the US Mars, square US Neptune: agitated action, unresolved anger and an on-off expression of energy.  Misdirected action and deceit/deception involved in the execution of initiatives.  Extreme activation of large groups and reactivity, violence and brutality.  War.

Inauguration Uranus-Pluto square US Sun and opposite Trump Jupiter and US Saturn: upset and potential violence, disruption and breakdown of social structures, extreme ideological/philosophical/religious initiatives with high risk/reward potentials, including financial.

The Inauguration Saturn will be in tight square to the US Neptune-Mars square, and conjunct-opposite Trump’s Sun-Moon-Nodes:  There may be dear lessons in store for Trump involving the use and abuse of power and authority; and honor, ethics and integrity are going to be very strongly challenged.  The situation will either make him or break him completely.

Do you get the picture here?….

I’m endeavoring to be objective in this analysis, but it seems like the Trump administration is going to be ushering us to the year 2020, the next election which coincides with the very rare and powerful conjunction of Jupiter, Saturn, and Pluto in square to Uranus.

For a long time now I’ve been pointing to this period in the future as the most pivotal potentially in modern times.  Donald Trump is leading us up to it.  He is a man of destiny, for better or worse.