The energy of the earth, fertility, substance, wealth; the focus on tangibility, sensuality, and practicality.    Taurus, a fixed sign, can be very stubborn; just as its animal symbol, the bull; likewise, they are very hard to move or even anger (but when you do….).  Taurus craves above all else security; whether that be in the coin of the realm, the physical touch of a friend, or a predictable and secure lifestyle.  Taurus’ have the potential to be great husbanders of wealth.

Taurus, with its rulership by Venus, is attracted to the physical manifestations of opulence and splendor: rare coins, precious gems, rare art, and other objects of luxury.  Many bankers have Taurus strong in their charts.  Taurus, also with it Venus rulership, is very loving and sensual, and at times self-indulgent.

The constellation Taurus contains two beautiful “gemlike” star clusters (see below), the Pleiades, and the Hyades; both of which glitter mesmerically to the naked eye.  Taurus also has the fixed star, Aldebaran, or the “Eye of the Bull”, which has a reddish hue.  All of the Taurus fixed stars are not known by astrologers to give off beneficent influences, even though the sign itself is relatively benign.

Taurus, on an esoteric plane, embodies the concept of GOD-OBEDIENCE; that is, though obedience to Divine Law and good stewardship of what is already ours, we gain in our material and spiritual affluence.  The story of Moses, the dispossessed Hebrews, and the Golden Calf can be quite illuminating.  (This story took place during the age of Taurus, from 4000 to 1600 BC.)

It was disobedience to the Law of God handed down by Moses, in the casting of the golden calf (possibly a going back to the Egyptian goddess Hathor, who would take the form of a cow) that Moses became very wrathful upon his own people.  Moses ordered the execution of over 3,000 of the Hebrews that day. 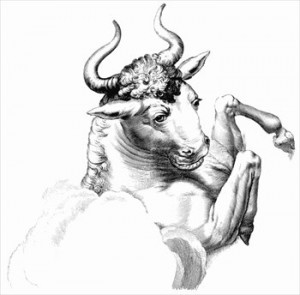 It was disobedience and overall bitterness on the part of the Hebrews that caused them to wander in the desert supposedly for 40 years.  Moses, himself, was denied by God entry into the Promised Land because of his murder of the Egyptian noble (murder as disobeying the law).

Taurus promotes the idea of gain and wealth not from speculating or gambling, or in just the aggressive acquisition of money through the sale of goods and services; but rather an increase that slowly comes by a just and good stewardship of the resources that one has.

It is interesting to note that the topping out of the US stock market occurred just 3 months prior to the planet Saturn entering the sidereal sign of Taurus in June of 2000; it signaled the time for increased realism in business, and a coming to grips with abuses of money-making ventures in the past