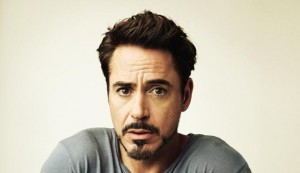 One of the biggest movies stars in the world today, Robert Downey Jr. also has an appropriately success-driven horoscope.  This article will look at his chart using the techniques of Vedic astrology, covering issues of his history of substance abuse, but also his rise to commanding fame through such movies as Kiss Kiss Bang Bang to Tropic Thunder to Iron Man.  This article is based on the April 4, 1965, 1:10 pm, New York City chart.

Downey’s Sun falls in sidereal Pisces, a sign of sensitivity and spiritual refinement, but also adversely of over-vulnerability, potential addictive behaviors, and self-deception.  Downey’s early life was self described as “surrounded by drugs” with his father an addict, to the point where he smoked marijuana with his father at the age of six.  Addictions carried through Downey’s life until the early 2000’s.

Charts are displayed at the bottom of this article.

Downey’s Cancer rising denotes sensitivity again, and with the Sun in another water sign Pisces there is an affinity towards the fantasy life of Hollywood movies, playing roles of imaginary characters. The Cancer rising also highlights the emotional resonance that such a person can command in order to be successful as an actor.

Cancer can also indicate a sort of inverted emotionality that many addicts exhibit by insulating their selves behind wall of drugs or alcohol.  Cancer is also just sensitive to it’s environment, and if one grows up in a world of drugs, one is bound to emulate such behaviors.

His Moon (disposing his Cancer rising) falling in aggressive Aries in the tenth house denotes an individual driven for success and acheivement, and the journey to the top may indeed be fraught with perils and pitfalls.  Downey’s personal mannerisms certainly reflect an Arian verve and quick-wittedness.  His Moon also flanked by benefic planets (Shubakartari Yoga) corroborates his overall life-success.

His Moon in the navamsha chart also falls in the twelfth house, further corroborating the Hollywood fantasy life quality, as well as that of addictions.

In western astrology the second house relates to the financial picture of an individual, as it also does in the Vedic system.  The second house also indicates issues with a person’s family in Vedic astrology.

Downey has a malefic planet, Mars, in his second house, and it is aspected by Saturn across from the eight house.  Right away this corroborates his abuse of substances, his situation with his family, especially his father, and his quick-witted and somewhat aggressive repartee.  It is easy to assume that his current net worth is quite high, and this would be attributed to Mars being his fifth and tenth house rulers falling in his house of finances.

An addictive lifestyle can also be seen having Saturn in the twelfth house from the Sun.

Since 2003 Downey claims to be addiction free, which he attributes in large part to his marriage to his wife Susan Downey.  Downey also claims his recovery is due to therapy, martial arts, and meditation.  He also describes himself spiritually as “Jewish-Buddhist”, which would be only natural for someone with three planets in Pisces in the ninth house of his chart.

In the western chart his Moon exactly opposes his Neptune, which would corroborate spirituality, an affinity for affecting different personas such as an actor would, but also a penchant for addictive behaviors.

Past Cycles of Addiction

Perhaps the worst period of his addictions occurred during the period of 1996 to 2001, arrested numerous times for drug possession, in and out of prison and drug rehab programs, and fired from the TV series Ally McBeal.  This who period coincided with his Rahu dasa (planetary period) and it’s sub dasas of Mercury, Ketu, and Venus from 1996 to 2002.  Rahu dasas can be particularly turbulent, especially during their Ketu sub-dasa phases.

This period also coincided with Saturn’s transit through his tenth house (conjunct his Moon), and transiting Pluto’s square to his natal Mars.  In the western chart Downey’s Mars is also quite closely conjunct to his natal Uranus and Pluto.

Downey career ascendancy certainly coincided with the ushering in of his Jupiter long dasa, starting in late 2005 and which will run until late 2021.  There could be quite a few years left to experience good-fortune-making power in his life.  You could say that he is definitely riding the peak of wave of his Jupiter dasa quite well.

During the period of mid July 2014 to July 2015, transiting Jupiter will be moving through his first house and transiting Pluto will be trining his natal Mars (ruling his tenth house).  All things being equal, this could prove to be quite a powerfully advantageous time for him personally.

Biographical info about Downey was taken chiefly from https://en.wikipedia.org/wiki/Robert_Downey,_Jr.