On Tuesday, January 30, 2008, transiting Mars will be making a station within one degree of the US natal Mars.  A "station" of a planet is when it changes from forward (direct) motion to retrograde  (backwards) or vice versa.  During the station the planet appears to stand still in the sky, as it were, before resuming motion.

In astrological context, the slower a planet moves the deeper and more potentially life-changing its effects will be.  So a planet not moving at all, as it would appear; this can mean that the planets effects felt astrologically become extremely powerful and far-reaching.

The planet Mars rules desire, a sense of urgency, and even aggression and violence.  It is most commonly associated with individuals or situations suddenly taking definitive or proactive action.  It is also commonly found to coincide with impulsive, premature, and somewhat belligerent energies.  Many times the psychological roots it seems to touch off are those of a sense of powerlessness, which causes one to compensate with excessively strong force.

The position of Mars in the natal chart points to areas of aggression, assertiveness, and even violence in a person or entity such as a nation’s life.  The conjunction of transiting Mars over natal Mars, depending on its natal conditioning and dignity, can be a key moment in the entity’s life especially in regards to the ability to take decisive action to defend itself and/or project its intentions.

So with the chart of the US and the US’s increasingly bold pressure against the Iranian government, the war in Iraq and Afghanistan, and tense situations in such places as North Korea or Pakistan; this could be a key moment in these theaters.  Since Mars is a pro-active planet we might even have the typical pretext-creation or false-flag events that have preceded nearly all wars and military conflicts.

Two recent examples of "pretext-creation" could be seen (although not necessarily) in the video from a supposed Al Qaeda operative (but who was really an Israeli spy) threatening the life of President Bush on his recent trip to the Middle East, and the "threatening" aggressive speed boat maneuvering against a US Navy ship to came within 200 meters and apparently gave threats via radio (which were later disproven).  Are these manufactured/manipulated or not?  They could be, but nevertheless they become used as rationales for increase levels of war-footing.

Since this astrological event is clearly rare and powerful in its portents, a word to the wise might be to watch out for suddenly erupting hostilities, destruction and loss of life; which most nearly always have even worse consequences down the road.  Maybe nothing extraordinary will happen, but I can be assured of saying that emotions will be running hot throughout the planetary body and very shrewd agencies would certainly want to take advantage of them.  There could be a ramping up of hostile rhetoric and provocation; but it always seems these behaviors never de-escalate but only grow over time.

Maybe certain agencies believe that war between the US and Iran is inevitable, high ranking US government policy papers have all but said these things as far back as the 1990’s.  This is way the world works: a problem is manufactured, which a certain solution pre-arranged is set up for the remedy, which brings everyone to a certain desired place.  The world is owned by those who use their minds.

Deeper Info on the US Mars

The US Mars is at this point in history especially pivotal sort of position because it is conjunct the natal Uranus of the nation of Israel’s chart.  Since Israel is sole ally of the US in the Middle East, this puts together an almost incendiary combination of planets during this time of war.  Mars and Uranus in any combination basically means action intended to stir up the status quo, and is generally considered a threat to an otherwise peaceful disposition. It introduces much discontent and almost fanatical drive to implement whatever agenda is on its mind.

Isreal of course is no friend to Iran and is in possession of probably hundreds of nuclear weapons.  Iran feeling threatened natually wants to even the playing field somewhat with the use of nuclear energy, even if only to help power their nation.  Plan are actually on the table to use bunker buster tactical nuclear weapons to destroy suspected underground Iran nuclear laboratories.

So it is clear to see that this is a highly volatile Mars at this juncture in time to be suddenly agitated by transiting Mars, right now.  Worse yet, transiting Mars itself is widely aspected by Pluto and Jupiter accross in sidereal Sagittarius; planets which have the known effect of amplifying and intensifying whatever the connect with.

Natally the US Mars is afflicted enough with its position in the turbulent eighth house and the square from natal Neptune.  Since the US is arguably a militaristic nation that in some ways glorifies war; this could mean that the natal square from Neptune could introduce elements of deception or intrigue in connection to war.  And we can all agree that there is no small amount of controversy regarding the US occupation of nations in the Middle East. 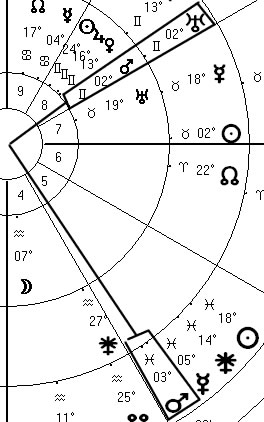 The image on the left shows a section of a tri-wheel with the US natal chart on the inner ring, Israel the middle, and Iran the outer; and their peculiar planetary alignments.

It is of no small consequence either that the US Mars (and therefore the Israel Uranus) squares the Iranian natal Mars.  This means the transiting Mars will be severely afflicting malefic planets simultaneously of the US, Israel, and Iran.  Remember also that this Mars will be more powerful than it usually is.

I’m sure that if someone look harder there would be even more to this potentially dangerous configuration, but this would seem quite enough for a developmental situation to occur.