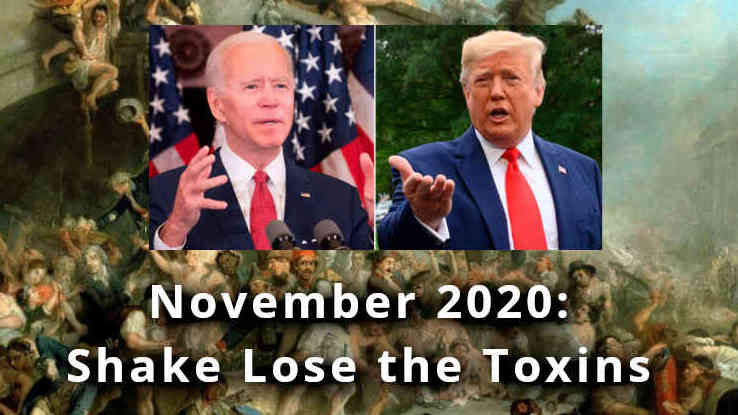 If the stars have anything to say about November 2020, the election itself will be on November 3rd, but some pivotal moments are foreseen about the twelfth and thirteenth of the month.

On the day of the election Mercury will be stationing forward, which I see will kick things off with excitement and clarity.  But with the expected vast numbers of mail in and early votes cast, the actual winner may not be known until a few days after; and with the stubborness of Donald Trump to not accept defeat it could be drawn out even further.

Which brings me to the conjunct of Jupiter and Pluto on Thursday, November 12 and the stationing forward (stationary direct) of Mars on Friday, November 13th.  A lot of powerplays and reactionary energies might be coming out, including some violence during this mid-month time-frame.

Maybe the winner will be declared and the loser (whoever that is) will just go home without too much fuss, but it’s not hard to see something developing from a new Biden administration or a continuing of the Trump one.  Or, possibly something is manifested with great impact and calculation because of the “new day” in the US.

I am reminded of the words of Arundhati Roy:

“It’s not a real choice, it’s an apparent choice, like choosing a brand of detergent. Whether you buy Ivory Snow or Tide, they both owned by Proctor and Gamble. ….Those in positions of real power, the bankers, the CEOs, are not vulnerable to the vote, and in any case they fund both sides.”

Later on then, towards the end of November, Neptune makes a direct station very close to a lunar eclipse. That is a very spacey and disorienting or disconcerting combination of astrology.  Neptune definitely has an association with oil, chemicals and toxins; but also just pure dysfunctionality and an inverted sort of self-abnegation.  Some may take a more sublime road of thought, but the majority may engage in some serious self-defeating trains of thought.  Thought, of course, precede actions with the foolish leading the fools.

Toxins have to be purged from the system, but they must be shaken lose from their deep lodging in our worlds before they can go.  Many times we can have the appearance of being healthy, but that doesn’t mean that we are actually healthy; a sort of faux well-being can exist but within us are harbored the seeds of eventual decline and collapse, that, with time, will cycle through.  With every end though, shaking out, comes a new beginning ever so humble.

I recall that “morning after” the 2016 election, a sick awareness.  But it had to be because the toxin had “come out” and we have to own up to its existence and seek hope for a renewed determination and commitment to a better world less tainted by grasping desperation (greed), among other unsavory qualities.

Monday, Nov 2
Mercury at Perihelion
Penetrative efficacy to cause change, be conscientious and honorable, but score a decisive victory.  Mental brilliance.  (Sun quintile Pluto, Mercury closest to the Sun)

Friday, Nov 6
Don’t give in to despair, in a moment you can rise above any perceived challenge. Focus and determination may become an amazing springboard to success.  (Mercury square Saturn, Sun quintile Saturn, Moon opposite Jupiter, Pluto and Saturn)

Tuesday, Nov 10
Mercury at Greatest Elongation
About midday (US time) the Moon opposes Neptune, giving great hope and possibilities (however dysfunctionally ascertained they may be), but help everyone to at least feel a little better.  Then again, clarity may have some very sublime moments.

Saturday, Nov 14
Diwali
New Moon in sidereal Scorpio
Confidence to make anything happen, even if it’s ultimately self-glorifying, petty, or abusive in nature.  (Sun and Moon sextile Jupiter and Pluto)

Monday, Nov 16
Relationships especially highlighted, be careful about making others happy and the expense of your own happiness.  (Venus conjunct Spica/Arcturus stars, biquintile Neptune)

Tuesday, Nov 17
Leonid Meteor Shower
Thoughts and encounters take you out of the norm, pushing boundaries.  (Mercury opposite Uranus)

Wednesday, Nov 18
As the Sun opposes Algol and Uranus conjuncts Hamal stars, intensity can be expected and surprising developments, which have liberating potential.

Saturday, Nov 21
More intensity and potential for deception (self-, or otherwise).  Toxic dysfunction.  Break the cycle of failing to rise to the occasion.  (Sun opposite Alcyone (Pleiades) and tridecile to Neptune, Venus conjunct fixed star Mirach)

Sunday, Nov 22
First Quarter Moon
Head the bad guys (or bad-stuff) at the pass!  Be proactive and definitely not RE-active.  Act from a posture of empowerment, not desperate frantic dis-empowerment. Mercury and Saturn today can allow added circumspection, even in crisis. (Sun sesquiquadrate Mars, Mercury quincunx Mars, Mercury quintile Saturn)

Monday, Nov 23
Relationships and situations today can take you out of the realm of reality, potentially into the realm of fantastic escapism. (Moon conjunct Neptune, Venus sesquiquadrate Neptune)

Friday, Nov 27
Moon at Apogee
Black Friday
Unusual and exciting situations and developments on the social scene.  Let love be free, not constrained or pre-determined; let go and let be. Verbal and perceptual depth and versatility.   (Venus opposite Uranus, Mercury sextile Pluto)

Saturday, Nov 28
Neptune Stationary Direct
Rod Serling Voice: You get out of bed and you’ve just stepped into the Twilight Zone.  Is this really the world you live in or is it some other faux imposter universe you find yourself in, just slightly different, maybe too happy, too pie in the sky.  That weird feeling you have in your gut is the so-called solid foundations of your life dissolving away into puddle; don’t resist, save yourself by becoming one with the ocean that you’re melting into.  Whatever you feel in that region between your gut and your heart is the Universe’s whisper-message to you.  You don’t need to put it in words, just go with it……

Sunday, Nov 29
Advent Begins
Weirdness and shock.  Don’t hold on too tightly to that which you feel is being ripped from you.  Sometimes we need to be separated from things, violently or not.  We’re getting a little shove from the Universe in a different direction.  (Sun quincunx Uranus and semisquare Pluto, Mercury opposite Algol star)

Monday, Nov 30
Full Moon Lunar Eclipse, 9:43 am GMT
The cosmos hiccups a little as the Moon turns reddish in the skies.  Some disorientation, but also intensity.  A new shift is in order, obvious enough to all.  (Venus quintile Pluto, Mercury sextile Saturn)

More dates to be added