John McCain Pt. I: Significance of His Birthchart

If I could sum up the life of John McCain in a few words I would say “incendiary, incredibly lucky, and favored to rule.”  He is now the Republican nominee apparent for the Novemeber 2008 election and will be contending against either Barak Obama or Hilary Clinton. He has had quite an interesting life and correspondingly so is his astrology.

….Basically, emotionally John McCain is kind of a train-wreck; ideally this type of chart configuration will push one to make radical self-transformations in life through a series of crisises; but if the person does not choose to take the high road where life takes him, he or she may actually become unstable.

McCain is however quite blessed in life to “rule” others, he just seems to naturally rise to the top and stay there, and a number of configurations in his chart reinforce this theme….

If I could sum up the life of John McCain in a few words I would say “incendiary, incredibly lucky, and favored to rule.”  He is now the Republican nominee apparent for the Novemeber 2008 election and will be contending against either Barak Obama or Hilary Clinton. He has had quite an interesting life and correspondingly so is his astrology.

McCain comes from a lineage high-ranked military men; both his father and paternal grandfather were admirals in the US Navy.  He was born on a military base in Panama and spent his early years moving from place to place with his family.

He had a reputation for being somewhat insubordinate, having a temper, being aggressive, and being a womanizing party man.  At the US Naval academy he was known as a “rowdy, rauchy, underachiever”; his grades were marginal and he earned many demerits, all of which helped him to graduate at the near bottom of his class. 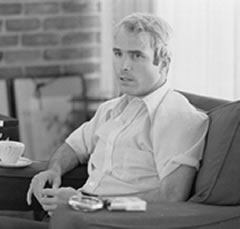 But no doubt because of his family influence he was granted naval pilot status.  In his aviator career McCain lost a total of five military aircraft, one of which was the horrific USS Forrestal fire (which he allegedly was the instigator of) which resulted in the loss of 134 sailors.  While he as at the center of the incident, he walked away with minor injuries.

He was shortly later shot down over Vietnam and subsequently taken prisoner for five and a half years.  Some would say that he was able to parlay the fact that he was a high admiral’s son to better accommodations and medical help.  It would seem that John McCain at times has an uncanny ability to get himself out of sticky situations.

After retiring from the Navy his entry into the world of politics seemed equally smooth and an assured rise to the top.  He ran for the House of Representatives for Arizona in 1982 and won.  In 1987 he took the role of US senator for Arizona and has been there ever since.   It was at this time McCain became involved in what became the Keating Five scandal, taking political contributions and special favors in exchange for helping Charles Keating to receive more favorable government regulatory treatment.

None of the Keating Five were charged with any ethics violations, they were slightly reprimanded but two of them (McCain included) had no problem being re-elected.  It help’s of course to have friends in high places (fellows on the Senate Judiciary committee), but once gain McCain’s career seemed immune from setback. 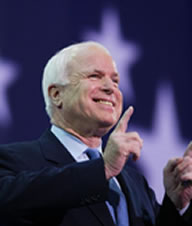 In the next installments of this series on John McCain, I’ll be covering more his current political situation being now the Republican nominee apparent for the 2008 presidential election; but for now I have to say that having this kind of “wind at your back” will go a long way to winning any sort of election.  This article will focus on his actual natal chart.

The Astrology of John McCain

The birthchart of John McCain is set for 9:00 am, August 29, 1936, Cocosolo, Panama; with the birthtime as recalled by his mother.  I have looked at this chart in detail and I am of the opinion that it is valid, and rectifies as good as anything with the timeline of events in his life.  There could be minor differences in the actual birthtime, but for the purposes of this series of articles it is very adequate.

The most immediate points that present themselves is his Virgoan ascendant with both Mercury and Venus rising.  Mercury and Venus rule both the tenth and ninth houses respectively in McCain’s chart and constitute “raja yoga”, a very fortuitous configuration which will help a person to go very far in life.  The ninth house in Vedic astrology is also related to the father in a person’s life, and having the rulers of those houses in his ascendant corroborates how his father many times helped him directly.

Importance of the Twelfth House

McCain’s Sun is very strong in Leo in the twelfth house, and this brings up many different points. First, it is the house of imprisonment and retreat, and McCain is well known for having spent five and half years in the “Hanoi Hilton”.  Such a configuration is also present in charts of people with hidden vices or and a sense of being conspired against.  Since his Sun is strong in Leo (and at it’s most powerful area right in the middle of the sign), his resentment and culpability towards his supposed “imprisonment” is very strongly acted upon.

This could give rise in part to his history of irritability, insubordination, and overall “meanness” towards others at times.  He could react to perceived challenges as deep threats to his personal power, which he much appropriately (severely) react against.  This also corresponds to his “carousing” behavior, tendencies thereof, which can make you very irritable because you’re suffering the hangover from.  Since a lot of politicians typically have a lot of vices, he’s just a part of their club.

These vices are also very important criteria for high officials though because their so-called “inappropriatisms” make them vulnerable to blackmail and subversion.  This may seem to be a very pessimistic appraisal on my part about politics, but I find in truth that most politicians are mainly front-men for the vested interests that groom them for public acceptance.  The real powers that be in the West are the various financial cartels, which basically own almost everything.

The other indicator pointing to his incendiary proclivities is the Moon in Capricorn in his chart (indicating a sort of pessimism or tendency to look at the bad side of things) in aspect to a debilitated Mars in his eleventh house in Cancer.  Mars in Cancer can indicates a sort of hysteria at times as the floodtides of cancerian emotions are charged with and impulsive sort of martian sense of powerlessness that causes one to react violently.

The emotional foundations of his life are further delineated by the condition of his fourth house, the very bottom of the chart indicating one’s private, inner life.  Sagittarius is on the cusp of the fourth house and it has the highly anxiety-producing North Node of the Moon (Rahu) there.  The ruler of the fourth house, Jupiter (planetary ruler of Sagittarius) itself falls in the severe and pathological-at-times Scorpio in the aggressive third house.  Jupiter itself is further disposed by the already commented on debilitated Mars.  Jupiter also gets a heavy aspect from Saturn making Vedic tenth house aspect from the sixth house.

All in all, McCain’s Jupiter; which could be considered to be an indicator of his warmth of personality, generosity, and spirituality has a lot of baggage attached to it.

Basically, emotionally John McCain is kind of a train-wreck; ideally this type of chart configuration will push one to make radical self-transformations in life through a series of crisises; but if the person does not choose to take the high road where life takes him, he or she may actually become unstable.

Handicaps to His Reputation

McCain’s reputation as a “maverick” (another euphemism perhaps for “loose cannon”) is indicated by the South Node (Ketu) in the tenth house of reputation and achievement.  He may not be quite understood, but he can be effective at what he determines to do, and he might employ whatever means possible to achieve those ends.  If McCain were actually to be elected to President, he might suffer a lot of “bad press” in office.  You could say he has a “bad reputation” already.

McCain has raja-yoga in a number of key instances in his chart: from the ascendant (janma lagna) Mercury and Venus as tne tenth and nine house rulers are prominant in the ascendant; from the Moon (chandra lagna), Venus as the fifth and tenth house ruler is in the ninth house; and from the Sun (Surya lagna), the fifth house ruler Jupiter is angular in the fourth house.  John McCain seems to have a lot going for him.  Is the 2008 election his year?  More to come on that point in parts 2 and 3 of this series.

Now since McCain seems to find himself at the center of a lot of turmoil; i.e. the Forrestal fire, being shot down over Vietnam and captured, the Keating Five, etc.; what sort of things could happen if he were to become President?  One might shudder at the possibilities.

Part II of this series will focus on John McCain’s astrological connections to the nation of America and it’s people, what are some of the deeper implications of a hypothetical McCain presidency.  Part III will deal with the current cycles of McCain and how well things look to go for him through the rest of the campaign season.  When I have done the same for Barak Obama and have updated my articles on Hilary Clinton, I will be comparing the astrology of all three of the major candidates and see how they stack up for the election for 2008 and see who the stars say will win.