December 2021: An Appropriate End to a Grueling Year 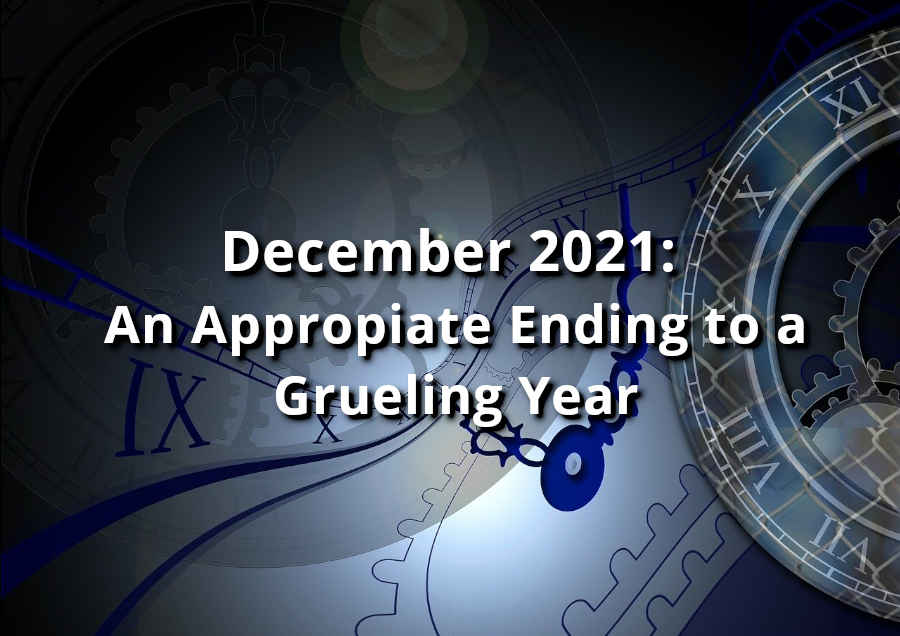 There is quite an interesting sequence of celestial events bringing 2021 to a close, almost as if December 2021 is a microcosm of the whole year itself.  We go from spaciness, to rancor and aggression, to the outright viability of society itself.  Let me begin…..

Right off the bat, Dec 1, Neptune stations and turns direct, which can have a disorienting or confusing effect.

Neptune’s work is to take us OUT what we think is “reality” and take us collectively upwards into more unconditional, blissful or spiritual states.  Spiritual, of course, can be a very inadequate word, trying to describe a place where people rarely go, or go at all.  It’s almost like trying to describe dry land to a fish in the sea, there is no point of reference to begin with; least of all, “multi-dimensionality” to a person whose life is television, fast food and getting drunk.

So, what we humans have to do is “let go” and just “be” with it, these untrammeled states of consciousness we are thrust into.  It can be a very, very vulnerable state to be in.  I don’t particularly like being lost in a forest at twilight myself.  The human imagination presents to us all types of horrible things that could happen, from wild animals, to freezing to death, to falling off a cliff at night.

But maybe if we just stayed there, didn’t thrash around, we might come to appreciate the stillness, the subtle sounds that come from everywhere and the nuggets of self-realization that might come out because we have nothing to distract us with its comforting familiarity. One might just come out a permanently changed person.

Well, that’s sort of what the first week of December 2021 contains for us, with the Neptune station and as the Sun moves into eclipse on December 4.

Deception and psychosis can also be connected with Neptune, and the riling of the flames of fear over the newly discovered Omicron variant of the Covid-19 virus, the situation could become quite overblown.  Very little is known about the Omicron variant as of yet and it could turn out to be benign in comparison to the Delta variant in the end.

A temporary diminishing of the Sun light harks us back to that night, which separates the days from each other and leads us to new opportunities and discoveries. 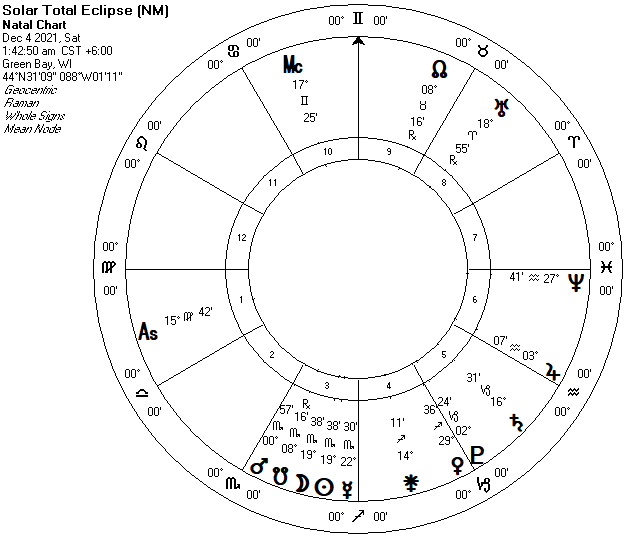 Looking at the chart, you’ll see quite a packed eclipse in sidereal Scorpio along with Mars, Ketu (South Node), and Mercury; quite a punch.

For something good to come, something “bad” must let go of, the vacuum in its wake allows something new to appear.  If humans didn’t let go of things, they eventually couldn’t move at all.  So, in the interest of the welfare of everybody, the Universe seems to conspire to deftly remove us from people, situations, things, or thinking patterns from time to time.  It’s celestial events like a Neptune Station closely followed by a powerful eclipse that conveniently seem to mirror such a process. 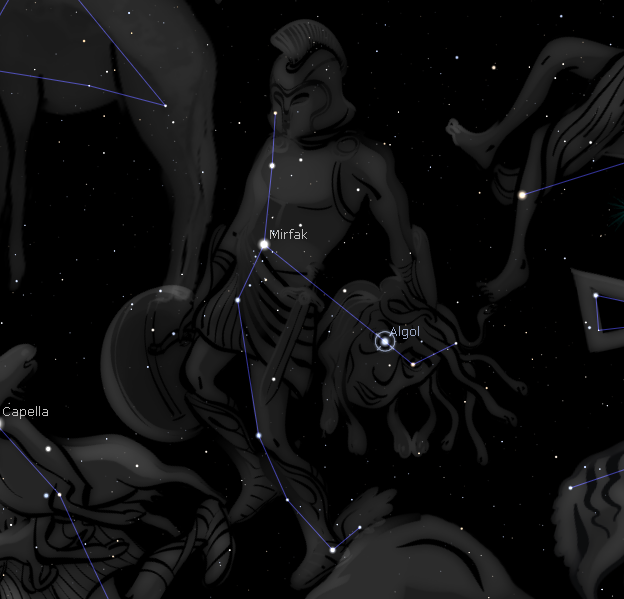 Algol star in the constellation of Pegasus, representing Medusa’s severed head, just above Taurus constellation and the Pleiades.

As we move into the next week, December 8, to be exact, transiting Mars makes exact opposition to Algol, the star representing Medusa’s severed head in the constellation of Pegasus, and makes exact zodiacal square to Jupiter on the same day. In the eclipse chart above you can see Mars and Jupiter already applying to square and Algol lies at three degrees sidereal Taurus.

Algol seems to represent violence, losses (as in one’s head), and other intense, traumatic or dramatic scenarios astrologically; with Mars, not unfamiliar with violence itself, we get a compounding effect of the potential intensity.

Jupiter at exact square to Mars and Algol, forming a t-square, will not cushion and mitigate things as much as it may amplify or overly-excite things, giving perhaps too much meaning or rationalization to violence, “justifying” it in the minds of those already perturbed.  We’re looking at a potential perfect storm, for ideologically bent violence, whether it’s violence on the streets or threats and promises.  Words themselves can wreak their own toll.

It should also be noted that during December 2021 the transiting Nodes of the Moon (Rahu and Ketu) will be crossing the Pleiades stars. The Pleiades stars are a beautifully brilliant cluster of stars just above Taurus constellation, which I’m sure you’ve seen many times, but I’ll include an image of them here.  Zodiacally they are at 8 degrees sidereal Taurus. 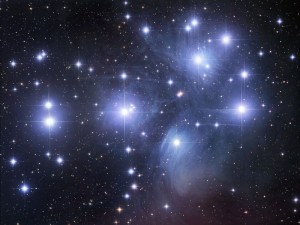 The Pleiades in my experince are extremely intense in their output, but through their acute intensity can bring about accelerated spiritual growth or “initiations”, if you will.

Initiation is a process whereby one’s spiritual mentor, guru or guiding presence delivers an intense input of energy into the life of that one, designed for a specific evolutionary/development goal.  There is a certain amount of risk attached to the process, but as they say, the greater the risk, the greater the rewards.

We then have an uplift as Venus makes station retrograde within one degree of Pluto on the 19th of December coming back around to conjunct Pluto on Christmas Day.   Venus and Pluto will be in close conjunction most of December.

Love may be delivering great delight, perhaps to excess, warping the lens of perception of every day life, and which may then deliver bitter disappointment sometime down the road.  Be aware of potential hidden agendas in relationships, base selfishness to the hurt of others.

Astrologers like to say we “look back” during retrogrades, I think it’s more “set back” than “look back”, but there is always an added benefit for having experienced it, like taking the lesson over again.

Then right over Christmas 2021 Saturn and Uranus also make their final square to each other for the present time (simultaneous with Venus and Pluto in conjunction).  I find that stress and tension is at optimum during Saturn-Uranus configurations, the old clashes with the new.  Uranus attacks the cracks in Saturn’s wall of logic, and it’s as if society itself is in an existential crisis. 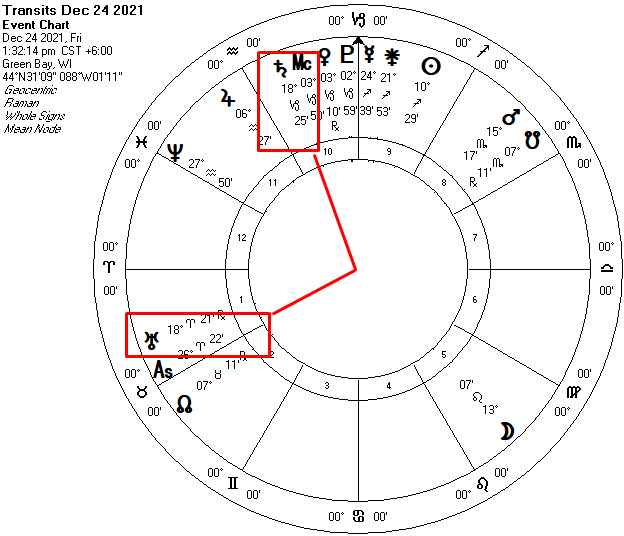 The last time this occurred was in 2008-08 as Obama became US President, shattering that white-only presidential paradigm, the emergence and flourishing of social media that melted away barriers to communications, but in other ways allowed the propagation of misinformation, and we had the financial crisis that collapsed the real estate market and shook the global financial system to its roots.

Of course, things have recovered somewhat, but not really so in my mind, the problems of the system were merely kicked down the road through massive bailouts and austerities, but which have only increased the level of imbalance/inequality in the system as well as the potential for catastrophes down the line.

It’s not exactly a heartening prediction that I bring, but the last two years have allowed us to kind of know it already, the stars themselves giving us updated guidelines.  2022 will be another election year in the US, with a Trump led Republican comeback seeming to be almost certain, and with no really exciting Democratic presidential contenders, paving the way for a GOP White House win in 2024.  At least that’s how it seems right now at the end of 2021.

Thursday, Dec 2
There is a very close conjunction of Mars and the Moon today, hopefully you can see before sunrise.  Emotional impact, urgency, and directness.

Saturday, Dec 4
Perigee Solar Eclipse
The Sun darkens at least on some part of the world today, signaling endings and new beginnings; for those in sidereal Scorpio or Taurus especially so.  There may be an enhanced otherworldliness or disorientation at work.

Monday, Dec 13
Mars on the Moon’s South Node opposes the Pleiades stars. Forces align for potential violence and misfortune. Deep psychological and spiritual moments propel you higher as you endeavor to do the right thing.

Friday Dec 17
What is denied or repressed can blow up in your face today. Dissatisfaction drives intent.  Seek proactiveness and honest reform. (Sun sesquiquadrate Uranus)

Tuesday, Dec 21
WINTER SOLSTICE
The shortest day in the Northern Hemisphere; longest in Southern Hemisphere.  The Moon is also opposite Venus and Pluto in the sky, emotional and relationship intensity possibly skewing perceptions of real interpersonal dynamics.

Tuesday, Dec 28
Daunting or intimidating tasks you shouldn’t avoid, as quick, hard, and strong as they may come. (Mars semisquare Pluto, quincunx Uranus)