The timers of action and disruption are about to converge on the celestial sphere exactly on August 1, 2022. Mars and Uranus, as well as the transiting Node of the Moon (Rahu) are at the twenty-fifth degree of sidereal Aries, literally brushing the hooves of the Aries ram and the Taurus bull.

This is definitely a watershed moment for planet Earth and everyone living on it, but if ever there was a watershed of fire, this would be it. 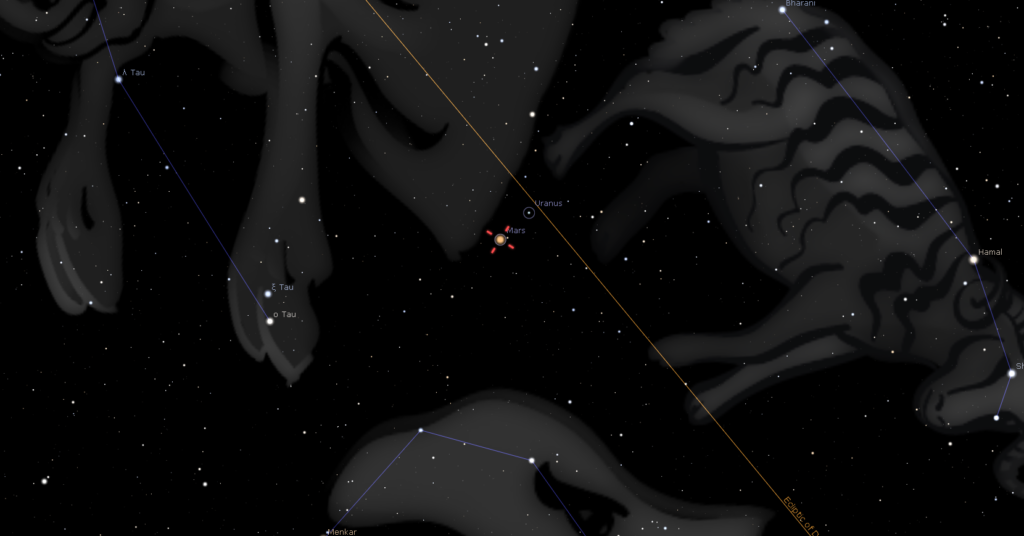 Mars-Uranus conjunction at the end of sidereal Aries, August 1, 2022 Click image to enlarge 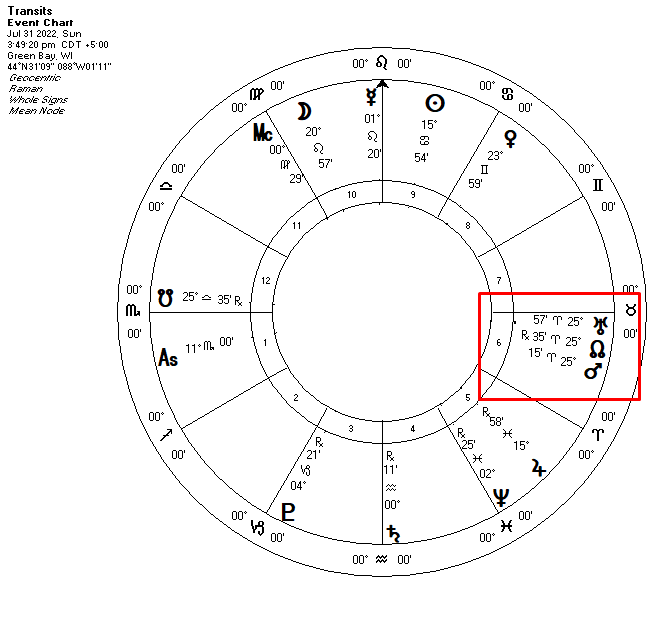 Sidereal zodiac wheel view of Mars, Uranus, and the Node in sidreal Aries

This configuration suggests an obvious tipping-point for various situations throughout the globe, such as an immanent escalation of violence by Russia against the Ukraine forces, the looming energy crisis in European countries as a result of this war, and then the economic equilibrium of all nations from the economic backlash of this same war.

Overall anger and frustration can flare, over many different sectors of life, overwhelming our ability to safely manage it (such as with government and police), and as Aries is a fire sign, fire/heat itself rages out of control.  Like Howard Beale in the movie Network (played by Peter Finch), the Universe/Us is “mad as hell and I’m not going to take it anymore”.

With Mars and Uranus the theme is “break free” from oppression, interference or obstruction with no time for subtlety or finesse.

Or, like William Butler Yeats poem, The Second Coming:

Turning and turning in the widening gyre
The falcon cannot hear the falconer;
Things fall apart; the centre cannot hold;
Mere anarchy is loosed upon the world,
The blood-dimmed tide is loosed, and everywhere
The ceremony of innocence is drowned;
The best lack all conviction, while the worst
Are full of passionate intensity.

Is Mars, Uranus, Node Conjunction Going to be Apocalyptic?

But let’s get real here.  It won’t be the apocalypse, except for the various emotional ones that humans have.  However, a lot of emotional apocalypses simultaneously can contribute to a collective crescendo of energy that does usher in significant changes, even some time down the road.  Seemingly innocuous or small things we are dealing with at that time of late July and early August, may contain very important clues to major shifts in our futures.

Another aspect of this configuration of Mars and Uranus is hysteria, which is basically a nervous overload of energy brought about by circumstances triggering deep fears in the psyche (individual and collective); that is, things may SEEM much worse than they really are.  We can think of fear by the acronym FEAR, or false evidence appearing real.

The presense of the Moon’s node here (Rahu) serves to significantly amplify the potential effects of the configuration.  The Nodes also have a connection to large groups of people being involved.

However, maybe hysteria is a compensation to the numbed despair that seems to be a chronic condition of humanity; the part that says, “what’s the use” and brings about a resigned acceptance to economic, societal and authoritarian oppression.  It’s the straw that broke the camel’s back, borrowing another metaphor.

Mars-Uranus can also indicate aggressive innovation, quick thinking and action, and crusading for a purpose; impactful surprise and threats to iconic people or situations.  This time using a Biblical allusion, from the book of Samuel “… How the mighty have fallen”.

I expect this peak of energy to be quick and brief in its duration, possibly somewhat premature.  Just don’t be surprised that you’re surprised.