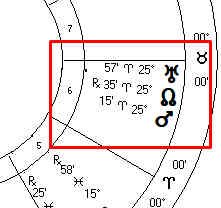 August starts out with the proverbial bang as Mars and Uranus converge exactly over the Moon’s ascending node.  We may have metaphorical and literal fireworks going on at this time.

Then toward end of month, from Aug 25 on, we have a tight string of configurations that pack some punch of their own, including Uranus turning stationary retrograde.

Stationary Uranus has the potential to add a little craziness to the air, elements which normally the status quo keeps held back.  But the power of change is unstoppable, to delay only increases the severity of the action.

The beginning of August may have some intense seeding of events, but their next steps in development may well manifest in the last week of August 2022.

The Russian/Ukraine conflict and the connected economic crises may intensify, creating much anxiety and the breakdown of calm.

Will it tip the scales?  Is it the match in the gasoline tank?

As I said before, change is inevitable, it’s the resistance to the process that produces problems.  I think the Universe prefers a vigorous stride into the future, demanding of us certain spiritual qualities, one of them being non-attachment to the past, and then optimism and hope for a better life.  Concurrent with those qualities is the understanding that Providence will provide; that is, we don’t need to hoard, to scheme after, or to deprive others of their provisions so that will have enough for us.

When we are free of those burdonsome sentiments we can more legitimately, authentically, and with joy pursue the beaconing possibilities of the future.  Letting go of attachment, especially to material things, will enable us to weather changes as they come upon us.  We know that what we lose, we will gain back in good time, and that in the long, long, long scheme of things that period of loss or deprivation will be less than a blip in our cosmic history.  We are manipulated by our fear of loss, but when we give up that fear we are actually more free and we can LIVE BETTER NOW.

Being therefore at ease, we are healthier and attract more of that happiness, which has equal spiritual and material components, to ourselves. This may seem very magical or pie-in-the-sky thinking, but you have to question yourself about your goals; to acheive temporary, fleeting success in the world’s eyes, or to acheive a more permanent, full-spectrum and actual success in life.

Break free from hindering, limiting and false concepts and fly towards your real priorities in life.  That is the message of this month’s Mars-Node-Uranus astrology this month.  Only you can do it.

Tuesday, Aug 2
Complex and deep issues and affairs, not all is as it appears to be.  Relationship activity. Motivation and energy may be elusive. (Sun sesquiquadrate Neptune, Mercury quincunx Pluto, Venus sextile Mars and Uranus)

Wednesday, Aug 3
Renewed skepticism and serious application as Saturn retrogrades back into sidereal Capricorn for the next three months.

Thursday, Aug 4
Pleasantries and love between others.  (Venus trine Juno)

Friday, Aug 12
Full Moon
Saturn looks to be companion to the bright Moon in the sky, as it may be time to get serious about things.  Urgency and severity. New emotional or relationship developments.  (Mercury tridecile Mars, Venus quintile Uranus)

Saturday, Aug 20
Surprising intensity in relationships, but not everything so powerful is legitimate or right.  (Venus sesquiquadrate Neptune, Mars conjunct Pleiades stars)

Tuesday, Aug 23
Mercury at Aphelion
Difficulty, resistance to flow of attention or communications. The need to determine to rise above challenges or inhibitions, and then do it.  The obstacle is not the problem, the problem is in you and it is solvable. Purposeful brilliance. (Mercury biquintile Saturn)

Thursday, Aug 25
Turning. New hope out of the ruin.  Let the dregs of the old cycle through as the new emerges.  Later sweetness and love appears. (Sun biquintile Pluto, Moon conjunct Venus)

Monday, Aug 29
Enjoyment but maybe at the expense of other things, so a shallow kind of enjoyment.  (Venus sesquiquadrate Jupiter)