Supermoon March 19, Cumulative Effects of Astrology Over the Past Two Years

I wanted to take the opportunity to catch up on Star World News with all the recent world developments, including the situations in Japan, Madison, WI, Libya, Egypt, Saudi Arabia, and other regions in North Africa.  I’ll also be covering the astrology of the last few years and the supermoon on March 19 this week, and I want to do this in as concise a way as possible.   Basically we have just gone through a very intense series of astrological stressor factors over the last two years, and their repercussions will take years to fully manifest themselves, details follow.

Note: I use sidereal zodiacal positions, the sign positions may appear differently from other astrology sites  Sidereal positions have the benefit of being more astronomically accurate, and work better for event predictions.

If we look at the latest super-configuration of outer planets beginning in 2008 and then concluding in the first few days of 2011, you will see an actual “reflection” in the heavens of what is happening in the earth.  I covered these configurations in detail in the ebook Mounting Challenges.  I am not an economist, but I try to understand the big picture.

Firstly, there was the 2008 opposition of Saturn and Uranus that coincided with the beginnings of the crash of the US economy with the subprime mortgage crisis and the general efforts to kill our economy with most manufacturing going overseas to the third world and China, yearly trillion dollar military expenditures by the US in wars and military occupations, various forms of supra-monetary-inflation occurring by the FED, multi-trillion dollar bank bailouts which ended up being hoarded by the banks, and the derivatives investment scams reaching into the quadrillion dollar level.

2008 also coincided with the election of Barak Obama under very populist Democratic themes, but which turned out to be even more corporatist-globalist oriented than the previous George Bush Administration and has only fully entrenched the US into a very bad situation.

Saturn and Uranus in this case reflected the growing chasm between authoritarian rule of the financial-corporate-banking class and their bought and paid-for political representatives in Congress and the White House, and a growing movement of grass roots groups around themes of freedom with Ron Paul, and which morphed into the “tea parties” (who unfortunately became co-opted by mainstream Republican-conservative interests and agendas.)

Even though the authoritarians succeeded, there was a lot of excitement and debate.  The whole story hasn’t yet been told, especially with the “revolt” of workers such as which is occurring in Madison, Wisconsin right now, who may embody the “left wing” version of what Ron Paul embodied.

Shift to 2009 with the various failed and succeeded coups in Georgia, the Ukraine, and Iran, pushed along by the US CIA through various front non-governmental-organizations such as the Endowment for Democracy, trying to start a “wave” of revolution and pave the way for more US-friendly rulers in those areas.  These events didn’t occur exactly in 2009, the trends are broad enough to be able to include them together.

Understand that revolutions occur when the contrast between freedom (represented by Uranus) and control (represented by Saturn) is at it’s highest, and you are always certain to find a little “help” with the process behind the scenes by powerful forces who prefer to keep a low profile, but who are interested in molding social forces to their own designs.

The next phase of this super-configuration occurred in the summer of 2010, when Jupiter, Pluto, and the Nodes entered into the picture, creating what is called a grand square configuration.  It was during this time that the war-waging, dollar-devaluing, and plundering was continuing with such initiatives as the health care “reform”, which turned out to be nothing more than another bailout, this time to the major insurance companies.  War fronts expanded into Afghanistan and Pakistan. 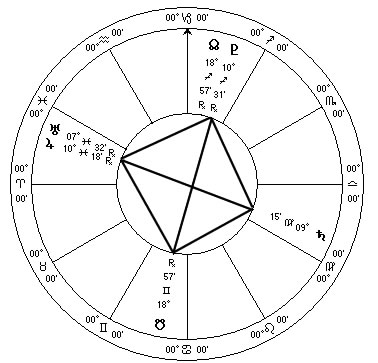 We might also imagine a lot of cloak and dagger occurring behind the scenes in key areas of the world, which are now in political turmoil and revolution such as with Tunisia, Egypt and Libya.  The unrest in these areas is deliberated created with austerities imposed by multi-national financial interests such as the World Bank and International Monetary Fund.  Supposedly to create a global society, but the end result is to create accumulations of power into the hands of a relatively few individuals, with vast numbers of people left in conditions of poverty.

Basically it was during this time that we can surmise that there was a “stirring of the pot” going on, through all these activities, seen and unseen.  Austerities also brought people out into the streets in Greece and Europe, as people were finding out their pensions were being stolen and they had to start to work more for less.

The final leg of this super-configuration (as I am calling it) occurred on January 4, 2011 with a powerful eclipse of the Sun, conjunct Mars, Pluto, and the Moon’s Node at the focal point of this t-square mentioned above.  It was not too long after January’s eclipse that things started to happen, and seemed to create a “wave” of unrest in regions of the world.  These configurations are extremely rare; there has never been a similar situation to my knowledge in the last several hundred years or possibly more

It is my contention that there was a building up of energy that was occurring during the phases of this super-configuration that would have its final release with the eclipse of January 2011.  Imagine if you will the ripples created when you throw a rock into a pond; you have the initial point of entry (as with the actual dates of the configurations occurred) but the effects move outward in waves for sometime after that, going quite far.

If you accept my analogy, we are still in the epicenter of this initial release, and its effects are going to be seen for a long, long time.  Indeed it makes sense now with austerities coming to the domestic US, with government simply overruling the wishes of the people.  The state governments (elected by the very financial agencies they are now protecting) claim this is because of “necessity” and that the people and their unions shouldn’t be so “greedy”; all the while producing the greatest corporate welfare the world has ever known, bailing out the very criminals who created the depression in the first place, and continuing wars of aggression that are destroying lives and infrastructure on a vast scale in other parts of the world, and destroying any vestige of respect for the US itself in the eyes of the world.

You could almost say that this earthquake and tsunami in Japan was “planned” also, because it makes no sense to build a nuclear power plant on a fault line and at sea level where the resulting tsunami could take it out and cause a nuclear catastrophe as is taking place.  It is either the height of design failure or some kind of deliberate time-bomb.  I won’t go deeply into that, but earthquakes can be a man-made phenomenon as well, and there has been some correlations attempted with HAARP activity just prior to the series of earthquakes.

Natural or not, and earthquake is a shifting of the earth’s plates.  The Earth itself in an organic living system, which responds to stimuli and energy patterns of the people over a long period of time.  If pressures build over a long time, which could be focalized and amplified by larger astrological patterns, there could be a critical release of tension.

One time of near-term focalizing and amplifying phenomena could be the supermoon of March 19, which apparently is the closest one to Earth in more than a few years.

What is a supermoon?  A supermoon is when the Sun, Earth and Moon are in extremely close alignment such as with a new or full moon, and the Moon is at perigee, or closest approach to the Earth.  This particular alignment of the supermoon could contribute to the release of the energy of the earthquake, aided abetted by the previous year’s build up of larger patterns already written about above.

Even though the supermoon will occur a week after the earthquakes, it has a strong correlation.  Causality seems to get reversed or mixed up in astrology sometimes.

Summing It All Up

I see things as a cumulatively building effect with astrological configurations in the world; and with this just-ending super-configuration, it is immediately behind us and its effects will manifest for some time to come.  As to how they will actually manifest…..well, that is YOUR opportunity to contribute to things happening in the way that you think is best.

Don’t be lazy, fearful, or confused.  Take action yourself.  Your efforts are like ripples in the pond as well, with very far-reaching effects.  I won’t go into a long-winded monologue about morality and rugged individualism, but I will say that the key to the future is a sustained spiritual energetics that will catapult you and then society at large eventually into a new age of progress and happiness.

It’s not hard, it doesn’t require “work” in the sense that we would normally think, and it is a state of mind and spirituality of our auras that radiates out into the world with marvelous transformative effect.   YOU ARE the key.

The next major configuration takes place a good while from now, the year 2020 to be exact.  We’ve got our work cut out for us now; we’ll cross THAT bridge in the future when we get to it.