Algebraic Astrological Alchemy: Libya and the US

Looking at the stars for the next couple of weeks, one can see a rather taxing period ahead.  Darker, potentially subversive elements will be playing out, playing upon our philosophies and attitudes.  Saturn and Neptune will be making hard aspects to Jupiter, which can have the effect of dampening and dissipating Jupiter’s sense of boundless optimism.

Far be it for me to say this is a bad thing at all, we can always use a healthy dose of realism that Saturn delivers.  We can always use Neptune’s ability to draw out our tendencies to let our selves be deluded or deceived.  One can almost picture a coming back to reality with a thud, but not losing entirely our sense of possibilities for good.

On the other end of the spectrum I am not seeing very good things because this period also coincides with a particularly nasty development in world affairs, namely a new US war, in Libya.  This war solemnly embarked upon with a sense of righteous honor, is actually so transparently deceitful with the shadowy legal premises of the UN resolution 1973, the flimsy excuse that leader Gaddafi is a tyrant and must be taken out, and the questionable existence of a real “freedom force” within Libya (CIA backed Muslim fundamentalists) that I think Obama should just come straight out and say: “Hey, Libya has a lot of oil and we want it, so we’re moving in.”

However governments need a pretext and some semblance of justification in order to pull off their actions, so the US military-intelligence-industrial complex goes to great pains (Saturn) to construct a fabricated enemy (Neptune), who is namely Muammar Gaddafi.  The same thing happened in Iraq in 2003, and the straw man was Saddam Hussein.

Then they pull the trigger.  After a fierce and one-sided assault,  the enemy is crushed and the new regime is installed with lots of new shiny infrastructure built to the expense of the tax payers and a very hefty profit to the contractors (who also by the way many times occupy positions of power in government.)  Sad, but true. 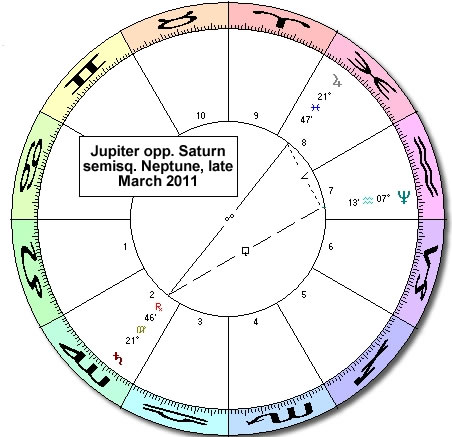 Then you need to amplification of the justifications, and that is where Jupiter now comes in, inflating the hyperbole, exaggerations and lies, and then making everyone believe them because the energy of the rationale is so galvanizing with a sense of self-righteousness.

The “thud” part I mentioned a couple paragraphs above may not manifest until after the peaking of the fabricated-delusion-crusade I am talking about with the configuration between Jupiter, Saturn, and Neptune, which will be occurring in stages this coming week.

This is definitely not a pretty picture I am painting, but the virtue I am aiming for is in the realism. However I also know that many people will be taking new initiatives after some hard lessons recently learned; those will be the people taking the high road with Jupiter, Saturn, and Neptune here.

To employ a little astrological algebra: engineered (Saturn) + deception (Neptune) + adventurism (Jupiter) = large scale initiatives that may get very sticky down the road, when the truth comes out.