Abundance: Lilies of the Field

Astrology predictions for March 2016 indicate possible shifts in fortune, but maybe the lessons that are learned in the process of manifesting good fortune. 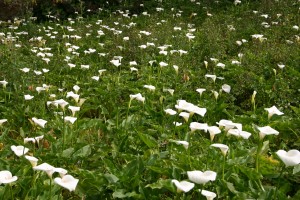 Before we had the insertion of the moneyed class to society in ancient times, people did not have to “work” in order to achieve abundance; it was more of the natural state of mankind.

As the Bible beautifully states:

Which of you by taking thought can add one cubit unto his stature?  Consider the lilies of the field, how they grow; they toil not, neither do they spin. And yet I say unto you, that even Solomon in all his glory was not arrayed like one of these.  Matthew 6

Yet because we live in this capitalist world, if we don’t work, we don’t eat, or have a place to lay our head at night so we can rest so we can go to our work mill, cubicle farm, or plantation that makes the “man” richer. But according to the capitalist the lilies are worthlessly lazy because they don’t produce anything, yet they are arrayed by their Lord with more raiment than Solomon himself. Go figure.

So this solar eclipse for March 2016 is particularly unique because it is very tightly aligned with Jupiter, the planet of abundance and good fortune. Jupiter does not “work” for money, as it were, he just waves his hand and it appears out of thin air. Saturn is the one who has to work hard and long before results appear. 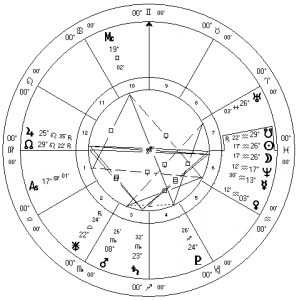 This is not to say that either Jupiter or Saturn is the one that has it right, it is pretty safe to say that there is a middle ground between them that more accurately describes the real truth about abundance, money, and good fortune in life.

Yet Saturn seems to have some superiority to Jupiter, it follows Jupiter in the order of the solar system. So one might say that we have to invest, sow and husband the resources that are abundantly provided by the universe for true gains, which we can then use to benefit life for all. Saturn reduces or rights Jupiter’s excesses, frivolities and arrogances, channels his energies constructively and more importantly, realistically.

So in this decidedly Jovian (Jupiter-themed) solar eclipse, there is also a square to Saturn from sidereal Scorpio, making it the focal point between the Sun, Moon, and Jupiter.

I must say though that the overall quality of the configuration is somewhat debilitated because each planet in the t-square is not well dignified astrologically. Jupiter in Leo is not especially good, more engendering of arrogance and the misuse of power, which is disposed by a debilitated Sun in Aquarius, which points to further dysfunctions of power and authority, which itself is disposed by a Saturn, which is in Scorpio, not a sign it is particularly well-placed in and conjunct by Mars.

This doesn’t portend well to this critical juncture in the American Presidential electoral process: Super Tuesday. Both Hillary Clinton and Donald Trump are poised to capture the delegate counts irreversibly and their nominations will almost be assured for their parties. Marco Rubio, Ted Cruz and Bernie Sanders could be pushed to the side in political irrelevance (even though Bernie Sanders has created a tremendous wave of populist support with his campaign platforms explicitly against the excesses and abuses of Wall Street and multinational corporations.)

Both Hillary and Trump front-running basically by a combination of big money, media support and a lot of ingratiation (big, non-detailed promises) to the people. So this massive corporate political machine moves on, steamrollering over any more legitimate “little people” concerns besides campaign lip service. The astrology seems to corroborate it. 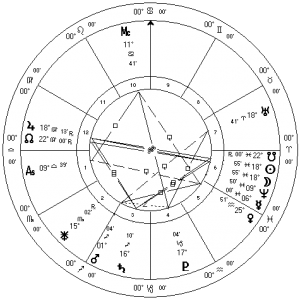 Thursday, March 3
Opportunities may present, but the payoffs may be of a frivolous or questionable nature. Later the ability to get organized and realistic about things is indicated with a decidedly skeptical flavor to it. Over coming blockages to communications may require some patience and determination. (Venus quincunx Jupiter, Mercury quintile Saturn)

Friday, March 4
Staying calm may be a challenge. There may be a tendency to perceive things as threats to oneself, with people acting accordingly. Retaining a cool head may allow you to act with great deftness and certainty. (Mercury square Mars)

Sunday, March 6
Sudden, but potentially positive, changes of fortune are indicated. Don’t let indecision or hesitation allow opportunities to pass you by. Obsessive fascination with darker or less-socially embraced issues may distract you from your real objectives today. With good fortune indicated, getting to the good may take some effort and determination to arrive to. (Jupiter quincunx Uranus, Sun square Saturn, Mercury semisquare Pluto, Sun sextile Pluto)

Monday, March 7
The strangeness of tomorrow’s solar eclipse may already start to be experienced; be careful how you tread in adventuresome opportunities that may be presented to you. Impulsivity may be a liability today. (Mars quintile Jupiter)

Tuesday, March 8, Solar Eclipse (New Moon) 4:56 am, Central Time
The Sun, Moon, Jupiter, and the Earth line up today. There may be shifts of the micro- and macro-cosmic worlds happening. It is an uncanny alignment of magnetic, gravitation, electrical and who-knows-what-else kinds of forces. You are bound to experience it somehow. Typically I have noticed levels of disorientation on these days; and some parts of the Earth will experience a decline of light for some part of the day. Eclipses (always coming in pairs–solar and lunar) can signal significant changes, especially as they may aspects parts of one’s natal horoscope. Spiritual and ideological areas of life are emphasized, as well as the enthusiasm which helps elicit good turns of affairs in life. (Sun opposite Jupiter)

Wednesday, March 9
Early on, more for the European time zones, the intensity and pace of life may dramatically pick up, with potentially an emphasis on the “drama.” Be careful of accidents, injuries, or conflicts with others (some of which can produce injuries or bruised egos.) Meditation, contemplation, or “checking out” is definitely not the best use of today’s astrology, however, vigorous self-stimulation and exercising oneself is. There may be a lot of personal projects (with great potential) collecting dust on the shelf of your mind. Pull them out, brush them off and get them going! (Sun tridecile Mars)

Thursday, March 10
Emotional tone may get a little unsolicited analysis through events, situations, and people; especially those close to you. If love is worth having, it is worth inconveniencing oneself for. Diligence and honor may reveal the very preciousness of things and people in your life. Artistic accomplishments are favored. (Venus quintile Saturn)

Friday, March 11
The parts of life that are not normally accessed may be emphasized: dreams, intuition and the other extra-sensory faculties we have. Deeply connective or karmic situations and gatherings may occur. Strongly intense situations and feelings are indicated, which conscientiously managed may bring you to profound discoveries. Be careful of pressing past your normal limits of output, but you may not have much of a choice. (Mercury conjunct Neptune, Sun conjunct South Node, Mars semisquare Pluto)

Saturday, March 12
The Sun enters the sidereal sign of Pisces; a more sensitive and subtler tone shift may be perceived.

Sunday, March 13
Emotional expression and experiences may exceed normal patterns in relationships and otherwise. Sometimes though we crave intensity in experiences to compensate for a certain deadness within. (Venus sesquiquadrate Pluto)

Monday, March 14
Parties may be at odds with each other. Deep set mindsets may clash. Resolution may not be easy, but not impossible. (Mercury square Saturn, Venus square Mars)

Tues-Wed, March 15-16
Ideas and their power to effect change are accentuated. Nothing may seem impossible or unrealistic, yet the enthusiasm to make these thoughts a reality are fickle indeed, just like some of our relationships. Be careful of waxing grandiose, bending the rules for expediency’s sake, or padding the numbers. The devil is in the details, as they say, who may (as he should ) trip you up by little details you disregard for convenience sake. Beware overblown promises. (Mercury opposite Jupiter sextile Pluto, Venus semisquare Uranus)

Thursday, March 17
Intellectual alliances,important subjects and conversations are indicated. The day may have an urgent or tense feel to it with egos being more defensive. Be careful with haste causing injuries, accidents or worse. (Mercury opposite Node, Mercury tridecile Mars)

Friday, March 18
Calmness may be a difficult quality to achieve at some points today, whether it’s the excitement of a new opportunity sudden opening to you, or the shock of events overriding your normal sense of equilibrium. Sometimes we need un unexpected turn of events (delivered with a certain impact) to knock us out of pattern we can no longer afford to retain. (Mars sesquiquadrate Uranus)

Saturday, March 19
Sometimes the choice is very clear: taking the high road, or not. Temptations for the later may seem difficult to resist. Breakdowns may coincide with breakthroughs. You may find compelling, magnetic power today to effect change. (Sun quintile Pluto)

Sunday, March 20
Love and emotions resonate particularly cosmically today, enhancing relationships and the appreciation of life. Artistic and spiritual activities are favored. The door may open to a more profoundly beautiful sense of living. New relationships may promise much, but are not assured of delivering on those promices. (Venus conjunct Neptune) 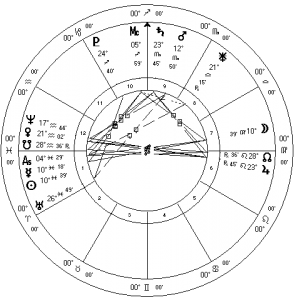 Monday, March 21
The mind and ability to communicate may find penetrating power, which may be used for humanities benefit, but which also may be used to manipulate or intimidate others. Compulsive tendencies are touched off. (Mercury quintile Pluto)

Wednesday, March 23, Lunar Eclipse (7:00 am Central Time)
Promising ventures may yield disappointing results. But the errors may simply be in your execution, attitudes and diligence (and it probably is.) Important junctures on the road to success now may cause you to reevaluate your goals, tactics and strategies. The Earth’s shadow coming across the face of the Moon today may produce somewhat disorienting effects, but also inaugurate important new cycles. (Jupiter square Saturn)

Friday, March 25, Saturn Stationary Retrograde
Needs and wants may be emphasized. All the good and favors of the world may never staunch that big hole in your soul. I suppose though that if all energy and opportunity in the universe were finite then the more, the better. But if energy and opportunity were infinite there would be no grasping, hoarding, or trying to steal from others, for it is all abundantly available. Today’s lesson may be that there is no rush to acquire, no need to worry, there is no imbalance of anything anywhere, except what we may believe in our minds, pertaining especially to love, money, and happiness. (Venus opposite Jupiter, Venus square Saturn)

Saturday, March 26
Deeper and possibly darker psychological motives are brought to light with a view towards how they may be positively directed. Motivation for action, progress, and fulfillment. Strong emotions may deepen relationships. (Sun trine Mars, Venus sextile Pluto) 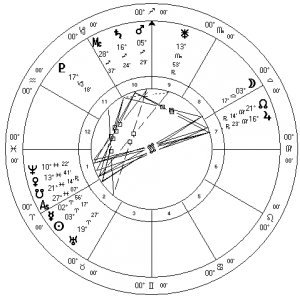 Tuesday, March 29
Romantic and deeply sincere connections are enhanced. A sound sense of optimism, excitement and realism is indicated, which can help bring about fortunate outcomes. Some connections may come to an end of sorts. (Venus conjunct South Node, Mercury quincunx Jupiter, Mercury trine Saturn)

Wednesday, March 30
Obsessive or compulsive tendencies are brought out. Communication lines or processes may be affected: corrupted, subverted or destroyed. Venus enters sidereal Pisces, enhancing sensitivity and compassion in relationships and all other areas. (Mercury square Pluto)

Thursday, March 31
Bold innovative ideas may challenge the status quo, which now may appear to be moving towards obsoleteness. (Mercury conjunct Uranus)