2023, the Year Ahead and January’s Astrological Portents

A Look at the Astrology of 2023: Vedic and Western Style

From an astrological point of view 2023 is fairly innocuous.  There are no major conjunctions or hard aspects occurring between the outer planets.  We have our regular assortment of eclipses, planetary stations and various groupings of all the planets; but nothing on the order of early 2020’s conjunctions between Jupiter, Saturn and Pluto, square Uranus. 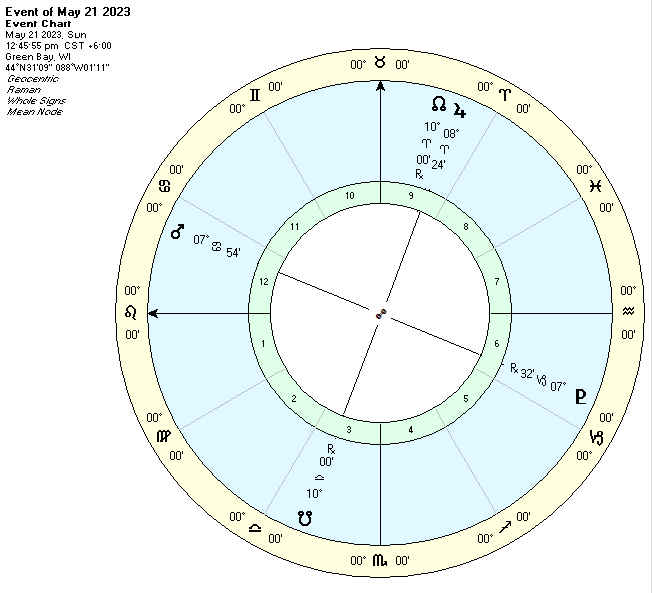 We will all remember how 2020 changed a lot of things, and the changes from that pivotal point in time-space still continue to ripple outward, some of which may manifest in 2023.  We have a major war in the Ukraine with a major turn in economic spheres happening as a result in Europe, Russia and China, but which will significantly affect the US and Western powers.

As far as when the US side of things becomes affected that would be years still from now; but an economy based primarily on oil and military might placed all over the world most certainly is in decline.

However, if there are any such social-economic-political shifts to occur in 2023 it could be around May 21 2023 as Jupiter and Pluto form a square to each other in sidereal Aries and Pluto right as Mars comes around to acutely aspect them.  You can see the Nodes also turning it into a grand square.

Jupiter and Pluto in hard aspect like this could indicate ambitious, but ethically questionable initiatives, which may look spectacular but also have the potential to blowup figuratively or literally around that time.

Interest rates will continue to rise ostensibly to inhibit inflation, but geneally putting a damper on all economic activity.

The rift between the US and West and the Russian/China alliance will grow wider as the Ukraine war grows darker and more bleak.  We have yet to fully see the consequences of this war, especially in terms of geopolitics and world economics, as this is literally a clash between world powers, the US and NATO nations and Russia and a growing alliance with China, India and other nations.

There will most certainly be a flood of refugees around the world, straining the economies of already distressed nations and pandemics continue to loom as major health threats.

Most certainly as well is the concern about the state of the people who find themselves in the middle of all these swirling issues.  Discontent will be high, most likely escalating, as their leaders seem to be inadequate to the task, or not having their interests least in mind.

With all this energetic distress, the Earth itself is reactive.  Herself a living being, the Earth may lash out still with earthquakes, tsunamis, arctic blasts and searing heat upon a hapless and oblivious mankind, becoming the facilation of their collective karma of neglect, hatred, and self-destruction.

I don’t paint a pretty picture here, but an attempt at realism is going to be much better than some kind of retreat into rosy delusion about the state of things.  At the same time, we have no where else to go.  We HAVE TO strive to make things work, be cooperative and loving towards each other and above all BE REAL.  The Wheel of life turns and we don’t get off until our collective karmic ledger is cleared and we do what we came here to do.

Looking at January 2023 in detail, we do have some moderate events, which will have bearing on our lives.  I’ll touch on a few of them here and leave the rest for the day to day portion of this article below.

Jupiter this month takes two significant aspects.  First there is the opposition to the Super Galactive Center on January 8.  What is the Super Galactic Center?  SGC is the center of the local group of galaxies which our Milky Way galaxy resides, we basically revolve around this galaxy which contains several trillion stars and has a massive black hole at this center estimated to be several billions times the mass of our Sun, which also has a jet of plasma shooting out from it extending 5,000 light years.

So, the Super Galactic Center is a pretty big powerful thing.  As Jupiter, the planet of expansion and ideas connects directly with it, it’s audacious temerity is sent through the roof.  Lot of ideas and big talk at this time, but the real magic will be in the implementation of those ideas, which is more Saturn’s department.

Then on January 20, Jupiter comes to perihelion, or closest to the Sun in it’s eliptical twelve-year orbit around it.  So, there are two significant Jupiter moments in January 2023, and I’m sure that Jupiter will have good opportunity to deliver some of it’s hope, optimism and good fortune as well during those times; possibly in preparation for the Jupiter-Mars-Pluto event outlined above in May 2023.

Mars turns direct on January 12, 2023. Mars has been knocking about in sidereal Taurus for a long time already, and I’m sure it’s ready to get out of that sign (which it is in debilitation in).  So the middle of January 2023 might have a break-out of sorts happening.

We also have the Super New Moon on January 21.  This is where the Moon is at it’s closest to the earth (perigee) but also at the new moon phase, so it has no illumination.  It’s basically a large black object in our sky, we just can’t see it, but it’s there.  This is why the new moon is also called the dark moon.

One day after that, January 22, Uranus, the planet of surprise and upset, turns direct itself just as Venus and Saturn are conjunct.  There may be a shift in affairs, especially with relationships; a more purposeful turn, some separations, but also some settliing in to a workable pattern for others.

Day by Day Astrology for January 2023

Tuesday, Jan 3
Decisiveness as the Moon conjuncts Mars mid-day US time.  Saturn moves into sidereal Aquarius denoting a significant shift for everyone.

Wednesday, Jan 4
Quadrantid Meteor Shower
Earth at Perihelion
Earth closest to the Sun today also forms a line with Sirius star in Canis Major constellation and the Sun. Who you are determines what you do, and who is in alliance with you.  (Sun biquintile Mars opposite Sirius star, Sun quintile Juno, Venus sextile Jupiter)

Friday, Jan 6
Full Moon
No peaking influences except for the fully illuminated Moon in the sky, like a second sun to humanity.

Sunday, Jan 8
Moon at Apogee
Jupiter opposite Super Galactic Center
Good fortune and ideas to leap to the next level.  Moon furthest from Earth today.

Sunday, Jan 15
Last Quarter Moon
Love is strong, but attitudes are grey.  The absence of light from without must be compensated for by the light that comes from within.  (Mercury semisquare Saturn, Venus semisquare Juno)

Thursday, Jan 19
Early on, emotional and relationship developments.  Learn how to create opportunities out of difficulties. Love and desire can sometimes be very different things.  (Venus tridecile Mars)