At least once a year Venus and Jupiter, the two benefics, conjunct.  However this year on July 1, they will be conjunct in zodiacal latitude as well as zodiacal longitude.  So it really becomes a special sort of astrological thing.

Normally a conjunction of Venus and Jupiter is sort of a minor occasion; it’s very brief and the “positive on positive” effects seem equally brief.  I imagine though a lot of uplift, loving, and fortuitous effects during this time (a couple days before and after July 1.)  Relationships, finances and the artistic and cultural world should receive a definite boost, as well as our spiritual affairs. A lot of astrologers are attributing some of the recent legal developments such as legalized same-sex marriage and the US Supreme Court upholding the Affordable Health Care Act.

Both of those events are seemingly significant on the surface and can have a great placating “feel good” effect to them, but their real weight is debatable, as many other trends financially and in the realms of government power, control and war-waging around the world are not changed; i.e. debt levels, quality of jobs, infrastructure neglect, terrorism on the rise and wars on multiple fronts including a new emerging US-NATO vs. Russia/China front.

President Obama himself is riding a wave of popularity, fueled greatly by those events.  Venus and Jupiter, however, most of the time have very fleeting and transitory effects to them.  They provide a great wave of emotion and excitement; but real good is as Thomas Edison said “one percent inspiration and ninety nine percent perspiration.”  Obama seems to be riding the Venus-Jupiter train right now. But some other major developments point to anything but “happy” things:

However if we look at the deeper psychology of Venus as Ishtar, the Babylonian goddess of love, sex, fertility and war, then things start to make more sense once again. As of this moment, the Greek Prime Minister Tsipras is teetering towards accepting the austerity plan of the IMF, and is recommending citizens vote no.  The situation is still fluid.  The people (having gone through tough austerities already) may still vote no.  We’ll see if the will of the people will be carried out anyway.  Sunday, July 5 is the date of the referendum for the Greeks.

I recall the Greeks at Thermopylae, standing against overwhelming odds, falling in the end, but in so opposing without yielding paved the way for the nationhood of Greece to come about, which formed a great part of Western civilization (portrayed in the movie 300).  Tsipras may find himself between a rock and hard place, but much weighs upon his (and the Greeks en masse) ultimate choice here.

If Greece defaults, other nations will follow and the European Union’s tenuous existence will surely collapse. On the day of the Venus-Jupiter conjunction there will also be a significant aspect between Mars and Saturn, which may cut short many of the excesses and frivolities which might otherwise occur with Venus and Jupiter. The latter half of July holds some kicking astrology (as in ‘kicking-ass’) on the 14th-15th with Mercury and Mars making hard aspects to Saturn and Pluto; it could be a day to remember, or one that one might like to forget.

However the planets merely bring us face to face with our own internal demons, which we would like to forget, but we are far better off dealing with consciously and conscientiously once and for all. Then on July 25 and 26th Venus and Uranus turn stationary respectively.  Relationships and highly incite-full developments are probable.

On July 6th, Jupiter enters the sidereal sign of Leo, which may not make it any easier to NOT act arrogantly, selfishly, or egotistically for a twelfth month period.  Think of Jupiter as the official, the orator, or the priest; and now in Leo add a lot more pomposity and bluster to the picture. August 2015 has things to talk about there, but more on that later……

Wednesday, July 1, Full Moon Harsh lessons amidst the flowering of love.  Mars and Saturn today may curb the anticipated Venus-Jupiter conjunction’s promise, forcing them to be real.  All of which may be a good thing because hopes and promises are always trumped by significant deeds and accomplishments.  Romantic, social and artistic endeavors are favored.  (Venus conjunct Jupiter, Mars biquintile Saturn, Sun trine Neptune)

Friday, July 3 Spirited debate and profitable opportunities are favored.  Be careful of hyperbole and inattention to detail, stick with practicality and what is recognizably possible.  (Mercury sextile Jupiter)

Saturday, July 4, US Independence Day No significant influences today except for Mercury entering the sidereal sign of rulership Gemini and further favoring discourse, investigation, and affairs in general.

Sunday, July 5 Impetuosity and recklessness may help push things into motion, not necessarily guaranteeing their success.  Opinions may have personal agendas attached to them, therefore tempers may flare; i.e. self-righteous zealotry cloaked in spiritual, ideological or philosophical trappings.  Nevertheless, discourse and interactions will have a pleasant tone to them.  (Mars semisquare Jupiter, Mercury sextile Venus)

Monday, July 6 Breaking out of obsolete structures and power configurations may be the task of the day, not easy by definition requiring no small amount of humility as well.  With Jupiter today entering sidereal Leo the real challenge be taking the ego to the back seat in our affairs (for a twelve month cycle.)  Obsessive and pathological tendencies are brought out in perfect opportunity for reform.  (Sun sesquiquadrate Saturn, Sun opposite Pluto)

Tuesday, July 7 Thoughts, actions and outcomes may be tinged by kind of despairing or confused negativity. A lie, of course, but quite tenacious to overcome. Following a mysterious and somewhat dark trail of thought may bring you to important self-revelations. (Mercury tridecile Neptune, Mercury quincunx Saturn)

Saturday, July 11 Determined analysis will break through any seemingly insurmountable problem, communications can be tight and focused.  Be careful of sharp wit and getting too heavy with criticism of others or situations.  (Mercury biquintile Saturn)

Monday, July 13 Debate and investigation may be stimulating, just be sure predispositions or ideologies do not get in the way of expressing truth.  Ideas and thoughts may seem cosmically vast, that all things are connected and the anything is possible, especially if you believe it to be so.  (Mercury semisquare Jupiter, Mercury trine Neptune)

Tuesday, July 14 That warm feeling may turn a little cold today. It’s not THAT bad, you’ll both be besties/lovebirds again before you know it. Sometimes love requires of us more than we feel particularly inclined to deliver at the moment, but love is the greatest prize.  Be prepared for difficulties and setbacks on your path today.  (Mars sesquiquadrate Saturn, Venus square Saturn)

Wednesday, July 15, New Moon What a day!  Boundaries broken, envelopes pushed, and nothing can be too crazy today.  There may be memorable relationship moments, and not every one will be tame or idyllic.  Tough situations may lead to breakthroughs, so don’t just run away from every sticky situation.  Chart is below.  (Mars conjunct Mercury opposite Pluto, Venus sesquiquadrate Pluto, Mercury sesquiquadrate Saturn, Venus semisquare Mars) 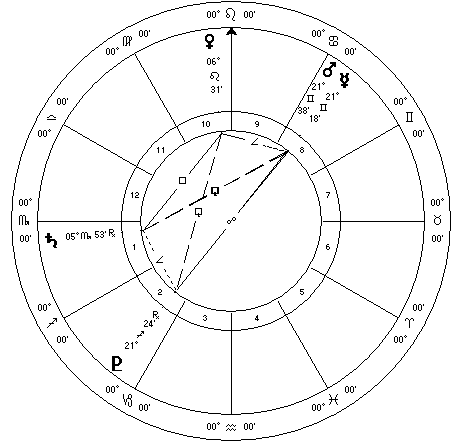 Mercury and Mars exactly oppose Pluto, semisquared by the square of Venus and Saturn on July 15, 2015

Friday, July 17 Truth and reality may be slippery issues today, behaviors may have a dysfunctional component to them.  Energy and motivation may be elusive.  Chronic physical sensitivities may be highlighted.  (Sun sesquiquadrate Neptune)

Saturday, July 18 Thinking and innovative processes may deal with unsettledness and agitation. However, new directions of thought may present themselves, albeit in rough form.  (Mercury square Uranus)

Friday, July 24 Be sure that amazing visions and perceptions today are not overly fanciful or over-reliant on hopes and dreams than what is relevant.  (Mercury biquintile Neptune)

Saturday, July 25, Venus Retrograde Events and developments may have a strident and strong tone to them, threatening to seemingly take things to a state of chaos or disruption.  Emotional states may be unusual and unexpected.  Relationships may come to important junctures.  (Mars square Uranus)

Sunday, July 26, Uranus Stationary Retrograde The stifling, suppressive, and overly-controlling presence of the status quo may seemingly reach intolerable levels now, which may help catapult you and others into new arenas of personal endeavor and expression.  Energy and motivation may be mysteriously elusive; getting a straight answer may be a challenge because what may the rules of engagement are suddenly dismissed.  Sublime creativity and spirituality are favored.  (Sun biquintile Neptune)

Monday, July 27 Debate, analysis and investigation may be stimulating, and in other areas challenged by bias and predisposition.  (Mercury tridecile Uranus, Mercury quincunx Neptune)

Tuesday, July 28 Communication and mental functions may be burdened by negativity of content or predisposition.  Getting the word out may be a challenge, to which some may back down from.  Mars enters the sidereal sign of its debility, Cancer; a definite shift may be felt in our affairs and we all may be a little more reactive and provokes in various ways for the next 45 days or so.  (Mercury tridecile Saturn)

Wednesday, July 29 Discussions may be provocative with compelling subjects, regardless of their complete veracity or not.  Compulsive or obsessive thoughts and behaviors may be set off.  (Mercury quincunx Pluto)

Thursday, July 30 Energy and motivation may be difficult to pull up, the weight of chronic issues (physical or otherwise) may seem quite onerous.  Be wary of stated intentions and seemingly benign initiatives through situations or people, that you don’t become a victim.  Realize that the actual “bad-guy” may be the one you see in the mirror.  (Mars sesquiquadrate Neptune)

Friday, July 31 Breaking free of alien molds and exercising your true prerogatives may be the challenge of the day. (Sun tridecile Uranus)