Transiting Mars right now is approaching conjunction with the Moon’s Node (North Node).  Therefore this upcoming period may have very “Mars-like” pivotal moments.  A good bit of caution is in order, especially over the weekend of July 13-14.

What are the Nodes?  They are not planets, they are in fact abstract points in the sky: the point where the planes of the Sun’s and Moon’s orbits (as seen from the Earth) cross.  You can think of it like the perfect blending of the energies of the Sun and Moon, which produces a profoundly spiritual reference point in the natal chart of an individual, and which by transit produces significantly impactful developments collectively for all. 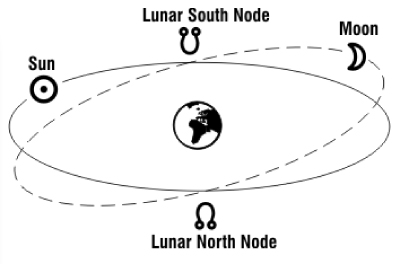 In Vedic astrology (my preferred brand of astrological interpretation), the Nodes are regarded as the severed halves of the body of Rahu, an asura of Hindu myth.  An asura is a demon-spirit, not entirely benevolent that plays various parts in the drama of the Hindu gods and goddesses.

As the story goes, this particular asura, Rahu, was vying with the gods to take a drink of their elixir of immortality called soma.  When the god Vishnu finally spied out Rahu, trying to sneak a sip, he let loose with his flying discus, which promptly cut Rahu in to two pieces.

Yet because Rahu had succeeded in taking the soma before Vishnu could act, he became immortal and would not die and thus became Rahu (the head) and Ketu (the tail.)

The nodes are not planets, per se, or “gods”, but rather serpentine “daemonic” forces (not necessarily evil); I prefer to look at the Nodes as the polarities of spiritual energy like the kundalini energy of the human chakra system, with a definite head and tail.  It is a tremendously powerful spiritual force which we are all wielders of, which can be used for good, or for ill.

Consequently, the activation of the Nodes in a person’s natal chart, will always be significant and deeply connected to their destiny and some of the karma that may block or hinder that destiny.  Nevertheless, it is a very deep subject to tackle in just one article, but hopefully you’re starting to get the picture.

Therefore transiting Mars connecting with the transiting Nodes will have some collective effect on life; and in Mars-like fashion, it should be interesting, urgent, and action-inciting.  The peak of this configuration will occur over the weekend of July 13-14.

I find it interesting that Mars the weapon-wielding warrior will be meeting the disembodied head of the asura, who himself suffered the wounding effects of a sharp metal object, namely Vishu’s spinning discus.  An ironic juxtaposition of wound-maker to wound-taker.

More technical note: there are always two positions of the nodes at any time, the mean and the true position.  They will differ by a degree or so.  I tend to favor the true position, but the mean position will also give results.

What this means is that the dates I gave above (July 13-14) may not be exactly correct, it may peak earlier or later, due to the differences in the mean and true positions of the Nodes.  Just one of those things that defies scientific mind’s need for mathematical exactness; however, since the Nodes are “shadow” planets, their effects on us may be coincidently shifting and shadowy in trying to pin down, especially for exact dates.  You may have noticed stuff heating up already.

Tuesday, July 8
Intense relationship directions are set off, some leading to transformation, others leading to destruction and oblivion.  Getting along may have its challenges today, but ultimately seeming opposites can be reconciled.  (Sun square Uranus, Sun trine Saturn, Juno quincunx Pluto)

Thursday, July 10
Energy and motivation may seem mysteriously absent, or may seem to come from unusual quarters.  Actions may be misguided, ending inconclusively.  Be wary of guile and deception.  Progress may seem slow and arduous, yet important landmarks may be in sight.  (Mars sesquiquadrate Neptune, Jupiter tridecile Saturn)

Friday, July 11
Connections may seem exciting and inspirational, be wary of potential hype.  Ideas may surface which may lead to new areas of progress.  (Mercury quintile Uranus, Juno semisquare Jupiter)

Saturday, July 12
Relationships need to work through heretofore incompletely resolved issues.  A little bit of selfishness, shame and blame, and some hysteria might surface before the real work gets started.  It’s okay, we’re all moving toward happy spaces and the past need not apply.  (Venus biquintile Saturn)

Sunday, July 13
Intense and passionate emotional and relationship dynamics are set in today.  Nevertheless, be careful of accidents, injuries or worse overall due to the impactfulness of the energy.  Deep and frightening emotions may suddenly lash out.  Peaceful solutions will be available.  (Mars conjunct North Node, Venus trine Mars)

Monday, July 14
Unusual, dark, and hard to understand energies and feelings may cast an opaque-ing shadow over affairs today.  Energy and motivation may be elusive and “bad” behaviors could be lit up.  Do not lose hope or that state of determined goal-realization.  It is always darkest just before the dawn, as they say.  (Sun squiquadrate Neptune, Venus tridecile Neptune, Mercury sesquiquadrate Saturn)

Tuesday, July 15
Unusual relationship and/or emotional setting may come about, which may help you to get “out of the box” in more ways than one.  (Juno sextile Uranus)

Wednesday, July 16
Relationships today may need to get past distinct hurdles, avoid the tendency to retreat into emotional coldness.  Situations and groups may need to rethink, retool, and reboot themselves.  (Sun square Nodes, Juno quincunx Saturn)

Thursday, July 17
Connecting with others may occur today along seldom or never used paths.  Just one more way life strives to be interesting and stimulating, and also get us out of our familiar (and quite possibly outworn) paths.  (Venus quintile Uranus)

Saturday, July 19
Will crashes against impulse, the higher battles the lower.  Relationships may suffer strains, however the refiner’s fire comes swiftly to purify and strengthen the ties that bind.  Early on, creativity and spiritual work will be favored.  (Sun square Mars, Venus sesquiquadrate Saturn, Mercury aspects Neptune)

Sunday and Monday, July 20-21, Saturn Stationary Direct, Uranus Stationary Retrograde
Significant shift are possible today and tomorrow.  If cracks are appearing the entire foundation may need to be re-laid.  Great leaps of mind, intuition and aspiration are indicated, which may open the way for new vistas of community and spiritual love.  It is important to keep the attitudes strong, a strong mast to catch the winds taking you to future endeavor.  (Jupiter biquintile Neptune, Sun tridecile Saturn)