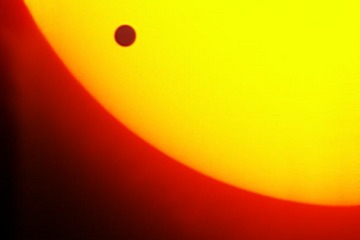 Venus is quite an interesting planet with many varied meanings attached to it through history.  Being so close to the Sun (along with Mercury) it became the Morning or Evening Star (Phosphorus and Hesperus, respectively) to the ancient Greeks.  The Latin translation of Phospheros is Lucifer (“light bearer”.)

There is a fascinating pattern of Venus stations that forms a pentagram, or five-pointed star, over an eight year period.  Five can be considered the number of man with his five extremities (two arms, two legs, and head), Venus’ orbit as seen from earth literally embodies this symbolism. 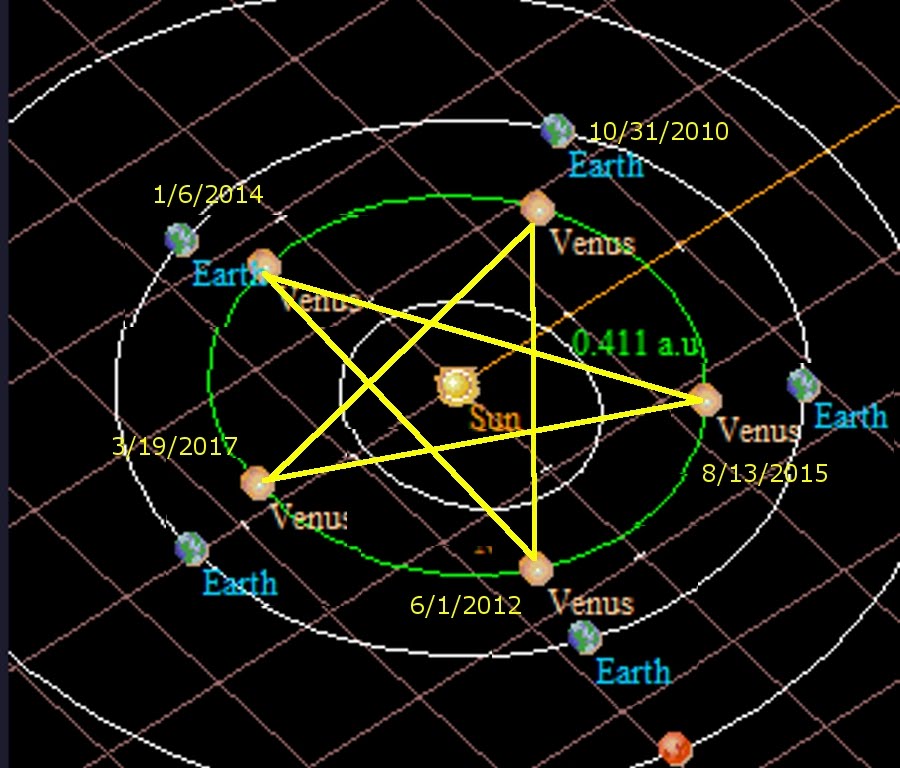 The ancient Babylonians called it Ishtar, the goddess of love.  Ishtar also was regarded as the goddess of war by the Babylonians, which gives us some pretty interesting ways to look at love.  The Babylonians also called Venus Nin-Dar-An-Na, the “bright queen of the sky.”  Anyone who finds Venus in the night sky will marvel at its luminosity and beauty.

Click here for more information about the history of Venus

In my research I’ve found Venus to figure highly in social situations, good luck, love, and personal charm; but I’ve also seen it to configure during situations of windy or inclement weather.  All in all, Venus is more than just a “love” planet, it has a quite a complicated character.

This upcoming Venus transit, actually an extremely tight inferior conjunction with the Sun, where the planet literally can be seen moving across the face of the Sun, is extremely rare, happening in a pattern of 105.5, 8, 121.5, and 8 years.  This means that the next Venus transit will occur in the year 2117.  This is the current pattern, but that will change in the year 2846.

Sequences of transits occur in a pattern that repeats every 243 years, with transits occurring eight years apart followed by a gap of 121.5 years, then a gap of eight years and then another long gap of 105.5 years. The pattern repeats every 243 years because 243 sidereal orbital periods of the Earth (365.25636 days—slightly longer than the tropical year) is 88757.3 days, and 395 sidereal orbital periods of Venus (224.701 days) is 88756.9 days. Thus, after this period both Venus and Earth have returned to very nearly the same point in each of their respective orbits. This period of time corresponds to 152 synodic periods of Venus.

The pattern of 105.5, 8, 121.5 and 8 years is not the only pattern that is possible within the 243-year cycle, because of the slight mismatch between the times when the Earth and Venus arrive at the point of conjunction. Prior to 1518, the pattern of transits was 8, 113.5 and 121.5 years, and the eight inter-transit gaps before the AD 546 transit were 121.5 years apart. The current pattern will continue until 2846, when it will be replaced by a pattern of 105.5, 129.5 and 8 years. Thus, the 243-year cycle is relatively stable, but the number of transits and their timing within the cycle will vary over time.

Aside from its rarity, the original scientific interest in observing a transit of Venus was that it could be used to determine the distance from the Earth to the Sun, and from this the size of the Solar, by employing the parallax method and Kepler’s third law. The technique involved making precise observations of the slight difference in the time of either the start or the end of the transit from widely separated points on the Earth’s surface. The distance between the points on the Earth was then used as a baseline to calculate the distance to Venus and the Sun via triangulation.

Click here for more information on when and where you can observe the Venus transit (with proper precautions, of course.)

To me as an astrologer I see it as a particularly tight inferior conjunction of the Sun and Venus, the fact that this type of conjunction and its unique cyclical pattern may indicate  significant relationship developments.

Perhaps the impact of this event will be underscored by two other simultaneous astrological events happening just one day before the Venus transit: a lunar eclipse, and Neptune turning retrograde on Monday, June 4.  The “hype” over the Venus transit seems to be more scientific or astronomical than metaphysical.  Sun-Venus conjunctions occur all the time, at least a couple times a year.  As I’ve said, this is a particularly tight conjunction, which to me gives it only slightly more relevance.

Astrology is more symbolical in nature, looser in its semantical rigor; whereas astronomy being more analytical will appreciate what this Venus transit is all about.  I find astrology to be quite exacting at times, especially with the Vedic system; but this may be an instance of where these two distinct schools of thought on the stars come together in the middle.

Tuesday, June 5
Today begins the much speculated upon Venus transit, relationships, and life in general may take new turns; the actual occurrence depends on your physical location  In other astrological configurations: there may be a reckless, adventuristic feel to this day; but initiatives seemingly born today may fall apart rather quickly, snared by more practical considerations.  (Sun conjunct Venus, Mars tridecile Jupiter)

Wednesday, June 6
Aside from the Venus transit extending into today in some parts of the world, no peaking influences

Friday, June 8
Perceptions and thinking may be uncommonly luminous, inspired by otherworldly possibilities.  Meditation and other spiritual work is favored.  (Mercury trine Neptune)

Saturday, June 9
Discussion, outlooks and behaviors may be somewhat darkened by a pessimistic attitudes, which can cause the so-called paralysis of analysis.  Thinking and energetic activity may be somewhat inhibited; however, perseverance may bring breakthroughs in organization and practicality.  (Mercury tridecile Saturn)

Sunday, June 10
An unsettled, dissatisfied, and/or urgent energy may characterize today; sometimes moving into hysteria or alarm.  Unpredictable life turns may come about, but this may be life’s way of opening up new avenues of development.  Mechanical and electrical devices may give trouble.  (Sun quintile Uranus, Mercury quintile Mars)

Monday, June 11
Deceitful, dishonest, and addictive behaviors are highlighted.  Physical sensitivities and allergies may make life difficult.  Obsessive or compulsive trains of thought may be hard to resist.  Some may find personal breakthroughs.  Manipulative and subversive tendencies may come out.   Old ways of thinking may be shattered.  (Sun tridecile Neptune, Mercury opposite Pluto, square Uranus)