Tuesday, Sept 2
Emotions may run suddenly deep and powerful, eliciting resolutions, revolutions, and renovations hopefully; be careful that the power of the situation and attendant emotions does not take you further down a road that you ultimately regret.  Uniqueness and individuality rather than going along to get along will be a theme of the day.  Mars enters sidereal Scorpio today, indicating a shift in everyone’s affairs, depending on the house position of sidereal Scorpio in their charts.  (Sun biquintile Uranus, Venus sesquiquadrate Pluto)

Wednesday, Sept 3
Ease to access personal power today.  Be careful not to misuse or abuse it, setting up conditions for decline and downfall down the road.  Revelations are possible, allowing a smoother entry to transformation.  (Sun trine Pluto)

Thursday, Sept 4
Stresses may elicit reactive actions.  Sleep or contentment may not come easy.  Compulsive or obsessive behaviors may arise, due to a darker cast of the day.  Determined resolutions may take one far, however.  Follow through will be key.  (Sun quintile Mars, Mercury semisquare Saturn)

Friday, Sept 5
Ideologies may rule the day, for better or worse.  The potential of being able to manifest a “miracle” is more pronounced.  Be careful of putting all your hopes, resources (funds) into opportunities not clearly thought out.  Love in relationship is enhanced.  (Jupiter quincunx Pluto, Venus semisquare Juno)

Sunday, Sept 7
Motivation, determination, and will is set to go beyond normal boundaries.  Be ethical and truthful in your actions.  Be careful going places that are potential danger zones, figuratively or literally.  Breakdowns are possible by pushing people, situations, or mechanical objects too far.  However, judicious exceeding the norm may yield surprising results.  Unusual and likely short-lived relationship developments may occur, opening you up to new life areas.  (Mars semisquare Pluto, Juno square Uranus) 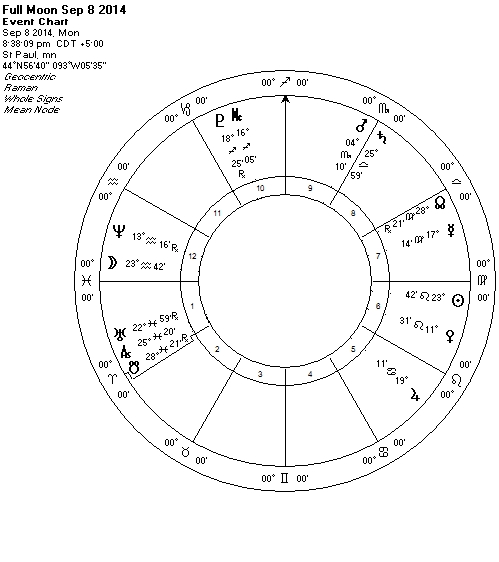 Monday, Sept 8, Full Moon
Going along to get along may not exactly work today.  We do all have to get along, but egos get in the way sometimes, especially when the illusion/delusion of personal power and authority is somehow challenged.  (Sun quincunx Uranus)

Tuesday, Sept 9
Obsessive and compulsive behaviors and thinking are indicated, which may bring on trouble down the road.  Communications may be blocked or altered by opposing forces; clarity may suffer because of psychological issues.  Relationships may be able to achieve practical and purposeful spaces.  (Mercury square Pluto, Sun sextile Juno)

Wednesday, Sept 10
Relationships may come to difficult and arduous places, coming to grips with past inconsistencies and failures of integrity.  Hope springs eternal, especially for those who persevere.  (Venus opposite Neptune, Venus quintile Saturn, Mercury biquintile Neptune, Mercury sextile Jupiter) 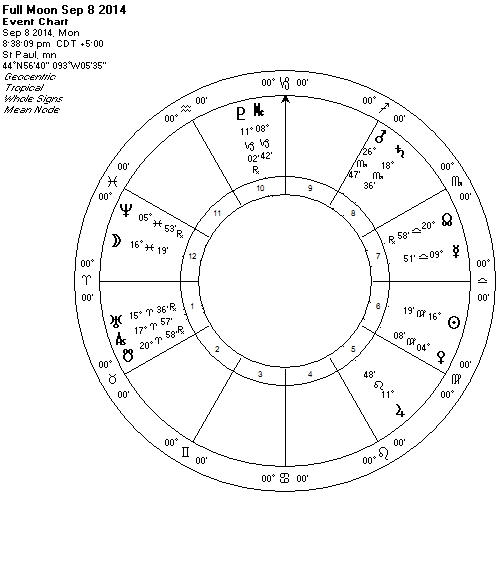 Sunday, Sept 15
Upset and surprising reactions are highlighted.  Sort of sowing the wind and reaping the whirlwind in effect.  New developments may swiftly manifest, under somewhat risky and dangerous contexts.  Be careful of life and limb.  Emotions and relationships may take on deep and significant turns, hopefully leading to transformations.  (Mars sesquiquadrate Uranus, Venus trine Pluto)

Monday, Sept 15
Fortune favors the bold, as they say.  Today that may be indeed so, but probably only to those who are already prepared.  Transformations and troubles to the left and right, drive a true path.  (Mars tridecile Jupiter, Sun tridecile Pluto)