There is a lot going on this week in the skies over our heads.  The Sun and Jupiter are at opposition, getting some assistance from Mars in the process; and then we have the Autumnal Equinox on Thursday, September 23rd.  The week then closes out with the Sun and Mars making aspects to Neptune and Pluto, which are nearly always coincidental with powerful and problematical life-developments. 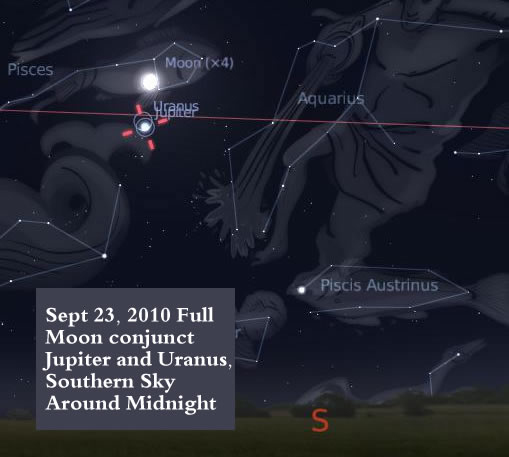 Some people will be “unscathed”, but they will be touched in a “collectivized-unconscious” way.  This happens to all of us, we see thing happen to other people, many times traumatic; we think we’re unaffected.  We’re wrong of course, because we are all connected at subtle inner levels; in fact we are just different externalized aspects of the One Universal Being.  The illusion of the self makes us think that we are unconnected and therefore non-concerned with the affairs of others; but nothing could be more wrong because we are brothers and sisters and more in truth the person we see as separate is really a different aspect of our self.

So if something troubling, sad, or somehow severe happens to someone you know, lend a helping loving hand; because the person you will be helping most will be you.

You can go outside around midnight this week (weather permitting) and look to the southern sky and see a very bright full moon and Jupiter very close by.  If you were Superman I’m sure you could also see Uranus (which is conjunct Jupiter), but it is normally too faint for the naked eye.  The glare of the full moon might also wash out Jupiter’s glory, but it should be pretty beautiful.  I’ve used the free program Stellarium to create a couple images of the configuration for this page. 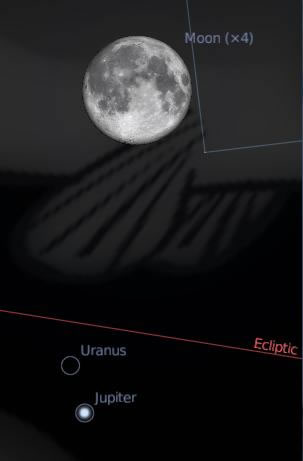 The effect of the Sun, Moon, and Mars upon the conjunction of Jupiter and Uranus this week should pick up the pace of events, and push excitement in human affairs to extraordinary levels.  People say and do a lot of foolish things during times like these; but sometimes truly unique, fortunate, and innovative developments happen to.  The fact that this configuration coincides with the Vernal Equinox certainly would seem to lend some of its excitement to the whole 90 day period; and this is a most decidedly positive thing astrologically.

Tuesday, Sept 21
There is a whole lot of stimulation going on today, life and the pace of events looks to be pretty invigorating.  Be careful of haste, impatience, moving on assumptions and feelings that seem almost beyond control; things could seem to heat up very fast.  Be careful of accidents, electrical and electronic breakdowns.  The feeling of love or the appreciation of beauty will feel heavenly, and enrapturment may indeed steal your heart; however tomorrow or a couple days from now you may wonder just how or why you were so taken by someone or something.  (Sun opposite Jupiter and Uranus, Mars biquintiling them as well, Venus tridecile Neptune)

Thursday, Sept 23 Autumnal Equinox and Full Moon
The first day of autumn. You know for sure that you’ve just rounded another corner of the year.  In the round of the Earth to the Sun, there are power points and this is one of them; at some level or another you’ll be feeling a shift and a surge of energy for the next three months.  There is also a Full Moon peaking today, which will be conjunct the recent conjunction of Jupiter and Uranus; there should be a lot of happiness and excitement.

Friday, Sept 24
Intensity may steal an hour in your mind, interactions, and behaviors; obsessive and compulsive tendencies will be touched off.  Mental and emotional breakthroughs are more possible.  (Mercury tridecile Pluto)

Saturday, Sept 25
Very unusual and/or startling developments are indicated, as well as deceitful and obsessive behaviors.  Physical and mechanical breakdowns are possible, and those in high risk areas (such as war zones, etc) should take appropriate caution.   Be careful also of addictions and physical sensitivities sabotaging the normal course of events.  (Sun square Pluto and biquintile Neptune)

Monday, Sept 27
People may be acting under deluded or erroneous ideas; the tendency to act dishonestly, aggressively, or maliciously are enhanced; and problems from drugs or toxins may affect physical ability.  Some may be highly inspired from a truly spiritual place, but certainly some powerful psychic or metaphysical manifestations are possible.  (Mars tridecile Neptune)