The big story of the week astrologically continues to be the very tight configurations between the Sun, Mars, Saturn, and Neptune.  Mercury will also be turning direct on Friday, August 26. 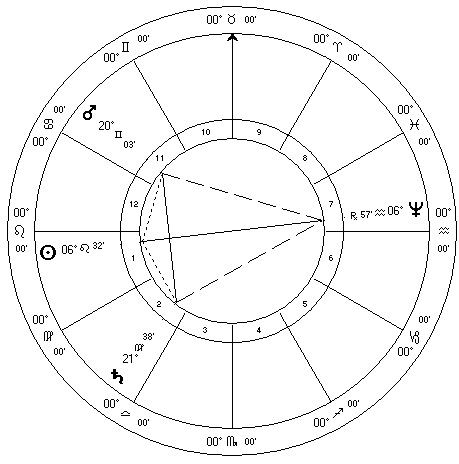 The more hidden part of this configuration is how the Sun and Neptune become a part of it.  Basically while Mars and Saturn square each other, they simultaneously form sesquiquadrates (135 degrees) to Neptune.  And, to accentuation this further, on Monday, August 22, the Sun exactly opposes Neptune, and therefore also aspects Mars and Saturn.

This is a very heavy, deep, and problematical configuration.  Reinhold Ebertin, who did some very important astrological research in the earlier 20th century described this combination as “weak vitality, an insufficient power to tackle resistance or any obstacles in one’s life, self-torment, loss of vitality thru poison, gas, or epidemic, mysterious loss, grave loss.”

While Mars and Saturn are very aggressive and potentially harmful at times, Neptune introduces elements of deception, loss, and despair at times.

I find it very interesting that the so-called NATO/Libyan rebel “alliance” is proclaiming victory over the Gaddafi forces right now; they may just be celebrating a little too early.  Then again, Gaddafi (and forces loyal to him) might be feeling the pain and sorrow of losing indeed.  They are pitted against vastly superior NATO forces and the combined resources of the western banking cartels such as the IMF and World Bank.

As I write this the drama has yet to come to a conclusion, the absolute peak of which may occur on Aug 24 and 25 as Mars, Saturn, and Neptune form exact aspects to each other.

Mon, Aug 22
Outlooks may sour, and moods darken, which may affect physiological responses.  Delays and problems may light up our underlying fear complexes, and pathological behaviors may come out.  People may act in strange or deceptive (self-deceptive) ways.  (Sun semisquare Saturn, opposite Neptune)

Wednesday, Aug 24
Discouragement, dissatisfaction, and seemingly being unable to surmount difficulties may be themes that characterize this day, if not the last couple days.  However the seeming impossibility of the situation may be the very key to finding the solution, because character traits (that get someone somewhere in life–Saturn) need to be self-generated.  You just sort of miraculously draw it out of thin air, or you assume it to be yours,  this is the kind of magic that Neptune specializes in.  Also suddenly manifesting, interesting, or possibly short-lived relationship developments may occur.  (Saturn sesquiquadrate Neptune, Venus quincunx Uranus)

Thursday, Aug 25
Accidents and injuries have a higher probability of occurring.  Your experience of people and situations may be unnecessarily harsh, so a little bit of patience can go a long way today.  It may be hard to find the energy necessary to get things done, chronic conditions may flare.  Unusual and powerful relationship situations may evolve, and emotions may have great depth.  (Mars square Saturn, sesquiquadrate Neptune, Venus trine Pluto)

Sunday, Aug 28
Extraordinary self-empowerment may be readily accessed today, just be sure to act ethically and with due consideration to others.  Remember Spiderman’s great lesson: with great power comes great responsibility.  (Sun trine Pluto)

Monday, Aug 29
Exciting and adventurous relationship developments may occur, just be sure that the other person will walk the walk instead of just talk the talk.  (Juno quincunx Jupiter)