Wednesday and Friday this week, May 11 and 13, look to be the most significant in terms of energies spiking and creating life-pivot-points.  Wednesday has a very interesting conjunction of Mercury, Venus, and Jupiter in Aries, with Mars (Aries’ ruler) in the same sign.
Western astrologers have been raving about this line up in tropical Aries, and you could say with the recent Osama bin Laden assassination (whether it was true or not) brought on an unusual amount of militaristic rhetoric on the part of the US, which is all very Mars/Arien in its expression.

The image below is a picture of the eastern sky just before sunrise in the northern hemisphere on May 11, 2011 (click the image to enlarge.)  You can also see Mars.  There is also an image of the astrological chart of the event (sidereal.) 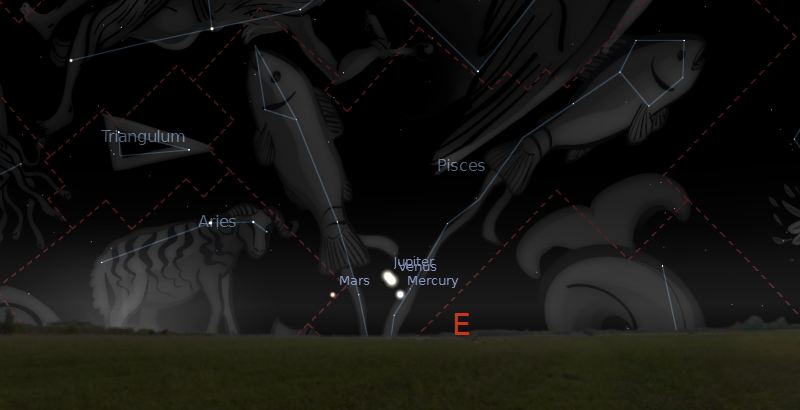 The peaking of this configuration in sidereal Aries this week could signify a high point in this brand of military-industrial complex one-ups-manship, and hopefully not accompanied by an escalation of further drone attacks on what seems to be the latest target of US designs: Pakistan.

To further punctuate this configuration, using the power of computers it is possible to see that the Aries conjunction will also be tridecile (108 degrees) to Pluto in sidereal Sagittarius.  This can have the effect of deeply intensifying or making the energy calamitous to one degree or another.  Either way, it could be in interesting week. 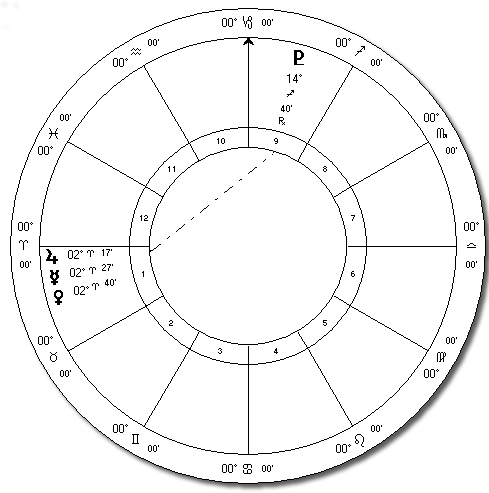 It should be understood that the final dispositor of this entire configuration is Mars.  A final dispositor is the planet which ultimately rules all of the other planets in any given chart; so with Mars there could a rather direct and impactful outcome.

Mon, May 9
Good fortune may characterize interactions and developments today, an upbeat and strident tone may help to open new doors.  (Mercury conjunct Venus while both enter sidereal Aries)

Tues, May 10
No peaking influences

Wed, May 11
Relationships probably will be accented, with an interesting emphasis on similarities of outlook and a zeal to proceed forward with some purposeful enterprise.  A lot of grandiosity and bluster may characterize this time, which usually is an attempt to cover up any underlying sense of inadequacy to the task, and usually in the end nothing happens.  However with the multiple connections to Pluto here, something indeed interesting may occur.  (Mercury and Venus conjunct Jupiter, all tridecile to Pluto)

Thurs, May 12
Energy and motivation may suffer inconveniently, the tendency to blur over ethics, rationalize, or to make a crusade about some issue (exaggerated or not) is highlighted.  Alternatively, spiritual or selfless actions are energized as well.  (Mars sextile Neptune)

Fri, May 13
A day when amazing things can happen, calculated risks may deliver tremendous rewards.  Some however may push the envelope too much and maybe gain a lesson in humility.  Ethics, philosophy, and spirituality may be at center, and how the individula may seize those energies and engage them in a cause greater than their selves.  Be careful of mechanical, physical, mental, or emotional breakdowns.  (Jupiter tridecile Pluto, Sun sesquiquadrate Pluto)

Sat, May 14
No peaking influences

Sun, May 15
No peaking influences

Mon, May 16
Communications and relationships may be made greater through discussions, spirituality, and cultural activities.  People may see more in others than is really there.  (Mercury conjunct Venus, sextile to Neptune)