Blame it on the Sun and Moon, Pretty Easy Actually 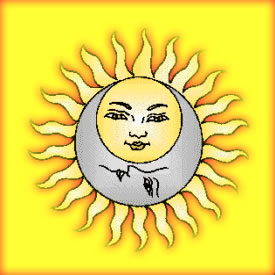 This week is very easy to write about, not much controversy or bluster.  The only exception is the parallel of the Sun and Mercury to Venus and Mars over Sunday and Monday, the 19th and 20th respectively.  A little bluster may occur on those days.

Parallels and conjunctions supposedly on the “y” axis of the ecliptic; planets coming to the exact same distance above or below the line of zero degrees declination.  Parallels are considered to be like conjunctions, contraparallels like oppositions,

It should be mentioned that we are in between eclipses right this month (July 7 and 23), the Sun and Moon lining up with the Nodes.  Eclipses have a distinct Neptune-like effect: pulling you out of your normal reality into some sort of strange twilight zone temporarily.  I certainly felt like I was in the Internet twilight zone today as I was trying to work on this site, getting to sites was extremely difficult even with my high speed connection and I wasn’t feeling particularly happy about it.

Either hubs are overloaded, North Korea is actually engaging in “cyber terrorism” like the State Department claims, there is too much downloading of Michael Jackson videos, or else the Internet gremlins are having the time of their lives.  Where’s the Internet industry stimulus package when you need one?!?

I highly doubt though that terrorism would be the problem, that seems laughable since the National Security Agency probably has enough monitoring ability that they would be able to spot a real “attack” immediately and deal with it.  Weird electromagnetic effects of the Sun, Moon, and Nodes may be wrecking havoc on life’s communication channels; and maybe with the behavior s and motivations of some unscrupulous people at that.

If you’re feeling weird, or feeling weird is something you don’t experience very much and you don’t like it; blame it on the Sun, Moon, and Nodes.  I would say that Jupiter conjunct Neptune disposed by Saturn in debilitation in sidereal Leo could contribute to such a condition (none of those planets have any particular good dignity in Aquarius).

I have to say though that eclipses are particularly spiritual in their ability to dramatically introduce us to uncharted psychic territory (psychic in more of a soul consciousness sense).  Eclipses can coincide with misfortunes, which certainly seem like they should be avoided at the time but nevertheless have the effect of removing us from no longer profitable personal patterns.

Monday, July 13
Obsessive or compulsive issues may come out in actions,  be careful dealing with people or situations revolving around power and control.  Errors of perception/analysis are possible, see things not as they are but as we would like them to be.  (Mars quincunx Pluto, Mercury biquintile Neptune, Sun conjunct Mercury)

Wednesday, July 15
Relationships, conversations, and feelings should be very positive; hopefully to counteract other more negative background influences, and not be otherwise merely escapist.  Judgment may be skewed towards over-optimism.  (Mars sextile Juno, Mercury quincunx Jupiter and Neptune)

Friday, July 17
Cordiality favored once more, we may tend to see people in a light that is more fanciful than truthful.  Subsequent disappointment may follow.  Be careful of spending valuable time, energy, and resources frivolously.   (Venus tridecile Jupiter and Neptune, Mercury opposite Node, Sun quincunx Jupiter)

Sunday, July 19
Some bluster, frustration, and friction may come out; and a pessimistic trend may be hard to shake for a while.  Being persevering however may help you to see a workable solution to your problems.  (Sun and Mercury parallel Mars, Mercury semisquare Saturn)

Monday, July 20
Love, relationships, and cordiality may be favored.  A little bit of urgency and impatience may raise the tempo of interactions.  (Sun and Mercury parallel Venus, Mercury sextile Mars)

Graph to be added shortly…..