Astrology for the Week of February 7, 2010; Bittersweet Finger of God Valentine’s Day

Valentine’s Day 2010 astrology is bittersweet with converging malefic influences on Venus right on the 14th of February.  Love is always a thing that looks pretty going into it, but can get very nasty in the middle and toward the end.  What to us seemed like love, really turned out to be a cold appropriation of each other’s psychological predispositions to validate and sustain each other’s dysfunctions.  So the real motivation eventually comes out, some people may stay together for decades like this because it’s still useful to them.  But happiness is not really a part of the equation. 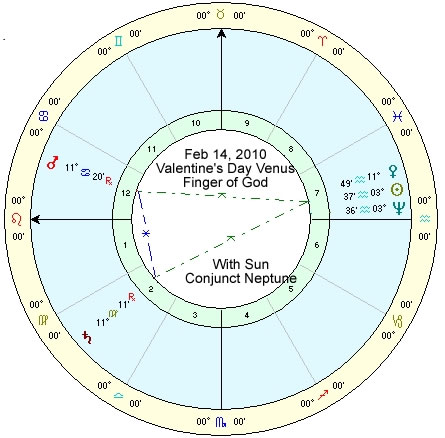 Venus becomes the focal point of a “finger of God” configuration in the stars: making 150 degree aspects (quincunx) to both Saturn and Mars, which sextile each other; it is definitely a mixed type of configuration of intermediate strength.  It does create quite a striking figure, which you can see “pointing” to a certain planet.

As Venus receives aspects from Saturn this week, it brings to the surface how we can despise each other, demonize them and view them as a threat to our happiness.  Feelings of alienation may come out, a coldness which is a subtle form of aggression.  While Mars also bears down on Venus, the callousness of relationships will come out, how we may abuse and manipulate another person for personal gain (gratification).  The soul recedes further and further away from the personhood of both the giver and the receiver of such behaviors; eventually so when that someone tries to reach out a hand in love, a stinging retribution is found instead.

Experiencing pain in love however is the first step to finding true love, being able to break out of that shell of self-imposed hardness.  Feeling vulnerable to the harshness of the cruel world is then the next, being willing to be a “weak and foolish” frees up energy which for so long was tied up in defending and boosting the ego above others.  Being “weak” becomes great strength and the higher light and love of the spiritual self is let in.  Soon enough love within meets love without.  All human suffering can be traced to the graspingness of the ego, desperately searching in the world for that which it lacks from within.

The Sun on Valentine’s Day also will be in exact conjunction with Neptune, so the energies of selfhood (Sun) are going to be under the influence of strange and delusory forces.  The ego normally strong may feel very weak, which has a tendency to bring out deceitful behavior patterns such as escapism, lying, and betrayal.  Addictions and other problems connected to health and substances are more prone to flare; the will may fail at critical junctures.

Therefore in the context of relationships, problems may ensue.  Issues of togetherness may be riddled with dishonesties and self-dishonesties, promising everything but delivering mainly disappointment.

Day by Day with Results:

Mon, Feb 8
Early on a more pessimistic, albeit realistic influence may come over affairs; problems, delays, setbacks, and other frustrations may ensue.  Be careful about falling back into dysfunctional or pathological mindsets and behaviors when things get difficult.  A deep determination to overcome can be seen to manifest though, so don’t give up so quickly.  Unusual or very beautiful relationship situations may come about but be wary of self-deception in relationships, seeing what you merely project out of your own psyche onto another person, thus seeing the elusive “other half” of you which you can only love.  (Sun hard aspect to Saturn and Pluto, Venus conjunct Neptune)

Tues, Feb 9
There may be a strong push-pull going on in relationships, beware that the one you demonize most may be one of the most important people in your life.  (Venus biquintile Saturn, Juno tridecile Pluto)

Wed, Feb 10
Wild enthusiasm and unrestrained impetuosity may cause a few spectacular crash and burns, but a few progressive enterprises may get off the ground.  (Mars quincunx Jupiter)

Fri, Feb 12
Initiative, physicality, and the “flight or flight” aspect of behavior may be intensely activated.  Some people may take things too far; and a sense of daring adventurousness may accompany various kinds of dark side journeys.  Sexuality will be highlighted.  Be careful about being in danger (war) zones.  Later on, a more somber and realistic tone may come upon intellectual or verbal matters, which may help curb the excesses mentioned two sentences ago.  (Mars quincunx Pluto, Mercury trine Saturn)

Sat, Feb 13
Early on there could be moments of hysteria, alarm, or urgency; however, from a calm center effectively penetrating communication can occur.  Important relationships can have harmonious moments; the distribution of power between people may be more equitable.  (Mercury opposite Mars, Sun sextile Juno)

Sun, Feb 14, Valentine’s Day
This could be a weird one (Valentine’s Day).  A lot of pathological elements line up with Venus, the planet of love.  On top of that the Sun, representing selfhood, conjuncts Neptune, the planet of self-abnegation; this combination also has delusory and dysfunctionally sacrificial aspects to it.  Reaching, grasping, or clutching for happiness in relationships may not turn out well; the sting of not finding outside what must be first instilled inside may be very acute today.  Nevertheless, some passion and intensity may come about.  (Venus quincunx Mars and Saturn, sextile Pluto, Sun conjunct Neptune)  Examples of such a dysfunctional Valentine’s Day below:

Mon, Feb 15
Deliberate, focused action and application is favored; results may be slow but good.  Be careful of simmering undercurrents of frustration, look to the good that’s happening now.  Activities like yoga or weight training should be favored.  Relationship developments can occur.  (Mars sextile Saturn, Venus aspects Nodes)