As Amy Coney Barrett took the oath to become Justice of the Supreme Court of the United States (see chart below), the sign Gemini was rising disposed by Mercury in moderately well dignity in Libra and was in mutual reception with Venus.  Mercury was also aspected by Saturn from the eighth house and conjunct the Sun. 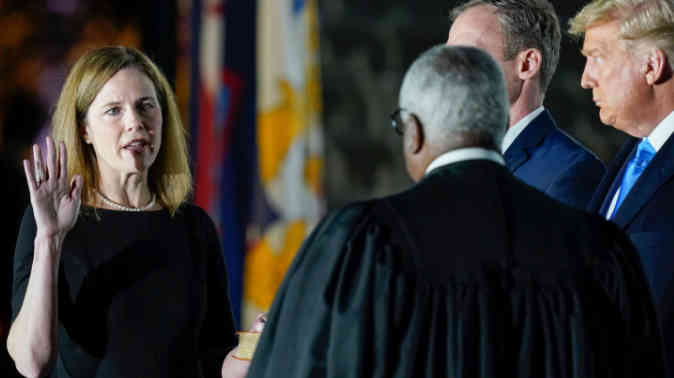 Before I decipher that astrological word-salad; I want to make a point that the swearing in of an official is one of a number of charts you could use to interpret the “birth” of a term of office.  Another valid chart could be the first day of official business as a Supreme Court Justice, including the actual time, etc.  It is debatable what would be the actual “birth” at issue here.

Additionally, there was a second official swearing in by the Chief Justice John G. Roberts at 11:00 in Washington, DC.  I will briefly cover that chart as well at the end of this article.  Inasmuch as the Oct 26 oath at the White House seemed more of a political event than an actual judicial, different charts can be valid for different reasons; or, perhaps there is the “real” chart among the different versions because that so-called real chart has the most prominence, which I would agree in this case.

Nevertheless, I’ll do justice for each chart (no pun intended).

Returning to this chart then, Mercury representing Amy Coney Barrett herself, the ruler of the first house, conjunct closely the Sun and receiving full Vedic tenth-house aspect from Saturn in rulership from the eighth house indicates a strong authoritative and potentially heavy-handed influence on the individual (ACB herself).

Such an influence could be external or internal; i.e. groups and individual upon her, or her own internet sets of drives, motivations and tendencies.

The position of Mars in the tenth house at the moment of the swearing in in the sign of Pisces, retrograde, indicates some sort of attempt at compassionate action or directing of efforts.  Mars disposed by Jupiter in Sagittarius (its rulership) and conjunct Pluto shows some confidence at work also, as well as some potential fanaticism of zeal at work also. 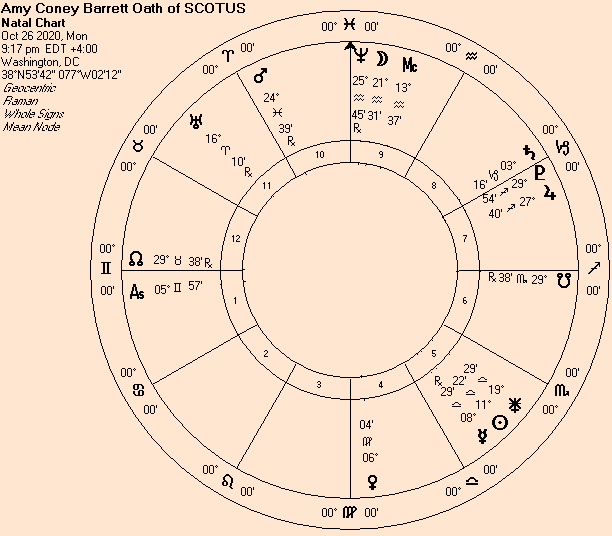 The Moon in intellectual Aquarius disposed by Saturn in the eighth and conjunct Neptune, corroborates the intense ideological and/or spiritual constructivism at work.  The potential for the blurring of boundaries and malleability of perceptions is strongly present.

Uranus in Aries in the eleventh house opposing the Sun and Mercury in the fifth house would indicates a reaching for a shaking or breaking past what has heretofore been considered “the norm”.

In our polarized politics of today, always split into “conservative” and “liberal” philosophies, I would imagine that those in alignment with Amy Coney Barrett would see the ideological parts of this astrology and then the strong Saturnian elements of this chart as a as a leaning for traditionalism and precedent.

Those of the opposite side of the spectrum would see the potential delusionary unilateralism, that is “my beliefs trump other considerations”, no pun intended.  Here the strong Saturnian elements would point to extreme uses of power and control to repress a more consensus-oriented policy.

Others perhaps would see that combination of the heavy-handedness and strong ideology as a cynical sort of assuaging emotions but at the same time oppressing the gullible and the weak.

If I put this chart over the chart of the USA, some more interesting things emerge.

The ACB Oath Mars and Jupiter makes a very tight grand square with the US Sun-Saturn.  I think this may indicate a strong resulting ideological split in the country that has no easy reconciliation, and will certainly be the cause of strife and division.

The square of the ACB Oath Mercury exactly to the US Pluto does not help the discussion either with the divides becoming all the more stark.

The Moon-Neptune conjunction of the ACB Oath chart in trine to the USA sun would seem to calm things down a bit, but possibly deceptively so. 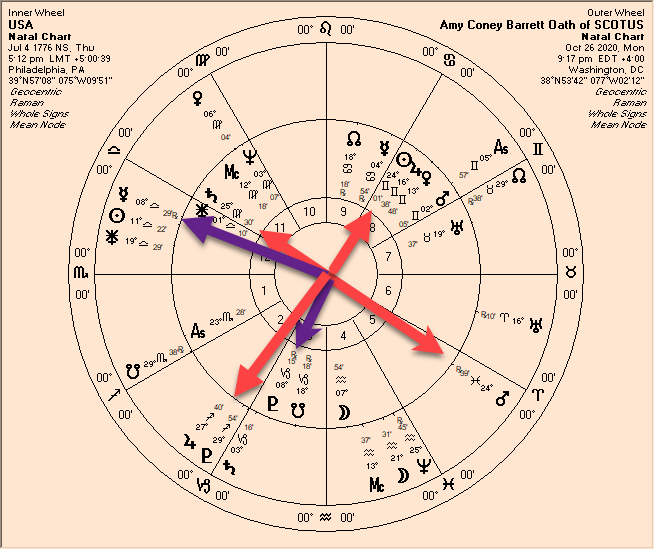 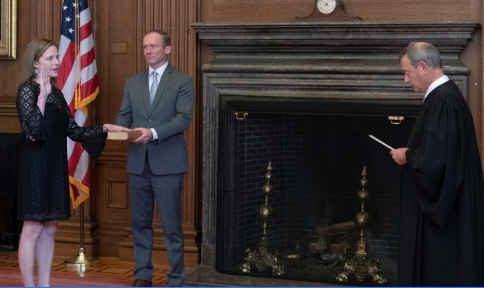 The Second Oath Chart: the Official Swearing In with the Chief Justice of the Supreme Court.

This second, more “official” oath of office to the Supreme Court of the United States, moves things around a bit.

The rising sign is Scorpio denoting a more aggressive tone, disposed by Mars in Pisces in the fifth house, and further disposed by Jupiter in Sagittarius in the second house.  There is an accentuation on honors, ceremony, beliefs and ideals; but at least in verbal expressions and debate.

The chart ruler Mars in Pisces denotes a certain sensitivity or compassion at work, the Vedic third house aspect of Saturn upon Mars here though may bring about a heavy-handedness or calculation to it’s execution.

The tenth house of reputation has Leo on the cusp and therefore ruled by disposed by the Sun in debility in Libra in the twelfth house.  With the twelfth house’s association with secretive or shadowy influences or agencies; it would indicate that not everything is out in the open with ACB’s tenure, or as it is presented to be.

Some might say that the twelfth house here indicates a more self-giving or “spiritual” motivation to their existence, and it could be.  However, I look at the nature of the planets here: the Sun is debilitated and disposed by a debilitated Venus in Virgo; there is basically two strikes against the positive interpretation.

There may be the seeds to their own self-demise present here.

The Moon is still in close conjunction to Neptune here denoting a kind of sensitivity or vulnerability to suggestion from others, and perhaps a lack of clarity or certainty at times.

Uranus in Aries in the sixth house opposite the Sun and Mercury in the twelfth house indicates a certain desire to push the envelope in the work arena; and that they might have a tendency to want to “push over the apple cart” a lot as a policy, but maybe even for it’s own sake sometimes; and the use of underhanded methods are not ruled out, especially if the ends justify the means.

The Moon and Neptune in Aquarius in the fourth house of this chart would seem to say that Amy Coney Barrett really feels like she has the best in mind for everyone, even if that may be a more subjective intention than anything.

Aspecting the US natal chart there are not very many changes, except perhaps the ascendant degrees are exactly the same, which would seem to slightly add to the significance of this chart; i.e. the ACB tenure somehow resonates with the people of the US and their destiny. 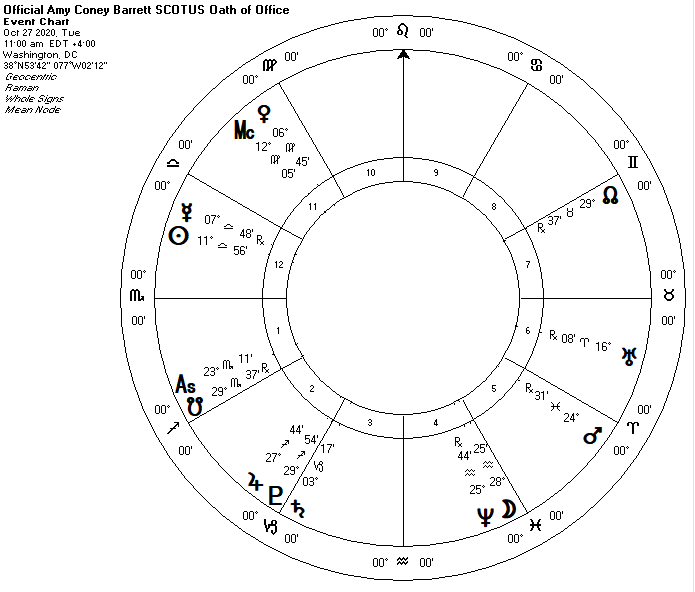