As Cruel As She Is Wayward….

Venus, the planet associated with love, turns retrograde.  Venus was associated with the Summerian Ishtar and Akkadian Innana, both of whom were goddess of love and war.  The diffenent Venus-feminite deities have been described as “cruel as they were wayward….”  Breakdown to precede epiphany…. 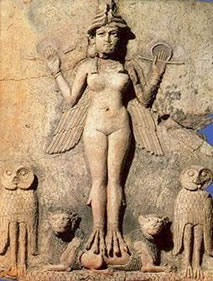 {tab=Overview}
After a few weeks of astrological “non-descriptness” the stars are finally coming alive once again, likely to coincide with developmental turns in current affairs.  Dates to be mindful of: Tuesday, Wednesday, and Friday this week (July 24,25, and 27)

Usually when things change it is accompanied by some sort of “break”, something either falls out, blows up, or collapses.  Sometimes when something falls through it is because we let it; we stand in the middle of the alchemic transformative fires enduring not a little discomfort for a little while.  This little transformative process many times you and I have avoided and shunned citing all sorts of reasons and justifications thereto.

I think we could continue to believe those reasons and rationales as to why we can’t, won’t, or shouldn’t endure these little hotspots.  But sometimes we just decide not live by those rules any longer, to be limited or constrained by them because we finally start to see it is a false or illusory paradigm that has held dominance over us for years and years.

We finally begin to understand that what our parents told us was not necessarily what is true.  We have to embrace the concept that it is not the most important thing to win the approval of our peers, parents, or societal authority figures.  To crave those things indicates an underlying sense of inadequacy, a misconception of the self that it is flawed, broken, or fundamentally out of order.

A point of self-confidence though is that there is an element of the self, or the soul, if you will, that knows the truth.  Then the person has to draw up courage to stand behind their convictions.  For a time though that person is quite alone in the forest of their fears.

So this week Pluto gets two major hits on Tuesday and Wednesday.  I would expect some sort of “breakdown” to precede various epiphanies in people’s lives peaking around this time.  Since there always seems to be some sort of bomb going off in the Middle East every day with bloody death and destruction, I would look to more of the emotional bombs going off in key positions that could cause developmental occurrences in our current affairs.

Some of these things may go on behind the scenes, but shortly enough the results of which may come out for all to see.

Then on Thursday, July 27, the bright star in the night sky Venus turns retrograde.  Certainly as it stops and reverses direction elements of relationships may make developmental turns and things may not seemingly go as normal in human love affairs.  Venus is the Roman name of the Greek goddess of love Aphrodite, whose tawdry vain life was played out in various myths.  Venus was associated with the Summerian Ishtar and Akkadian Innana, both of whom were goddess of love and war.  The diffenent Venus-feminite deities have been described as “cruel as they were wayward.”

So interestingly the fates of both love and war may turn this week on planet Earth.  If you look at Venus in the night sky, usually as the morning or evening star, it is one of the most beautiful and delight-producing lights in the heavens.  There is an ancient hymn to Ishtar (Venus); I’m certain its authors were referring in part to its brilliance in the sky:

"Ishtar is clothed with pleasure and love,
She is laden with vitality, charm and voluptuousness.
In lips she is sweet, life is in her mouth.
At her appearance rejoicing becomes full.
She is glorious; veils are thrown over her head.
Her figure is beautiful; her eyes are brilliant.
The goddess – with her there is counsel.
The fate of everything she holds in her hand.
At her glance there is created joy,
Power, magnificence, the protecting deity and guardian spirit…"
– Hymn of Ishtar

There are also some descriptions of Ishtar/Venus/Innana:

{tab=Day by Day}
Mon, Jul 23
Early on today a sense of enthusiasm may seize the mind, hopefully propelling you up and out of your mental ruts, but hopefully not causing you to leap to unrealistic conclusions as an over-enthusiastic compensatory reaction.  (Mercury quincunx Jupiter)

Tue. Jul 24
How and why you act as you do will be at issue.  Specifically, is if of a clear and true motivation, or is it stemming from a desire that is not to your best interests?  Not a little bit of extra subconscious baggage may be attached, so the question could actually be who and what is driving things?  For when you act in habitual, non-thinking, or obsessive manner it is not you who is in control.  You’ve “sublet” yourself, as it were; and you are a tool of an external force.  Fact is subconscious energies may take on amazingly strong power in your world today, causing you to do things which you later regret.  For those who can maintain self-sovereignty however, a tremendous purging of the body, psyche, and soul can occur.  (Mars square Neptune, biquintile Pluto)

Wed, Jul 25
Much like yesterday unconscious forces may take on phenomenal strength inside of you, the actions of which that are produced you still will be accountable for. Breakdowns could occur, be careful of pushing yourself or something beyond its limits of usability in a fanatical push to prove something.  Again, for those who can keep things under control and profound purging and transformation can take place.  (Sun biquintile Pluto)

Thur, Jul 26
The urge to break free of restraint may be overwhelming; resentments against abuses of authority may become acute.  You may feel very strongly the need to “do your own thing” and scoff at those who prefer a subservient role in life.  Relationship situations may figure in to your be unique, they could start and end with equal suddenness.  At times today, what is seen, talked, or heard about may not be quite what it really is.  (Sun sesquiquadrate Uranus, Uranus quincunx Juno, Mercury biquintile Neptune)

Fri, Jul 27
Cordiality, sociability, and charm may take on great strength today as the planet Venus stops in the sky and turns retrograde.  Since Venus through the mythology of Ishtar is as much the goddess of war as she is of love, developments in the interest of the military/industrial complex may move along with all the usual innocents caught in the middle.  Pride, braggadocio, and hyperbole may be strong; but maybe at the same time firing the mind with great enthusiasm, which can be productive of good fortune.  (Venus stationary retrograde, Mercury biquintile Jupiter)

Sat, Jul 28
Cordiality of communications should be high; this would be a good day for social get-togethers.  (Mercury semisquare Venus)

Sun, Jul 29, FULL MOON IN SIDEREAL CAPRICORN
As the Moon is now fully lit up by the Sun, beneficial rays of good fortune should shine on everyone.  Since the Moon is debilitated however in Capricorn some of its benefits could be muted or blocked, but which might be incite-ful of a spirit of overcoming and perseverance.  Communications in relationships may be at issue, superficiality and assumptions causing problems in human affairs.  Later on, be careful of conflicts and accidents.   (Mercury square Juno, Full Moon)

Mon, Jul 30
Powerful, dynamic forces may be unleashed which could result in accidents and injuries.  Nevertheless it is a day to act, rather than contemplate things.  Relationships should figure in as well.  Sometimes in relationships we can act quite insensitively and/or abusively.  Be careful of misquoted or misunderstood facts and detail.   (Sun quintile Mars quintile Juno, Mercury quincunx Neptune)