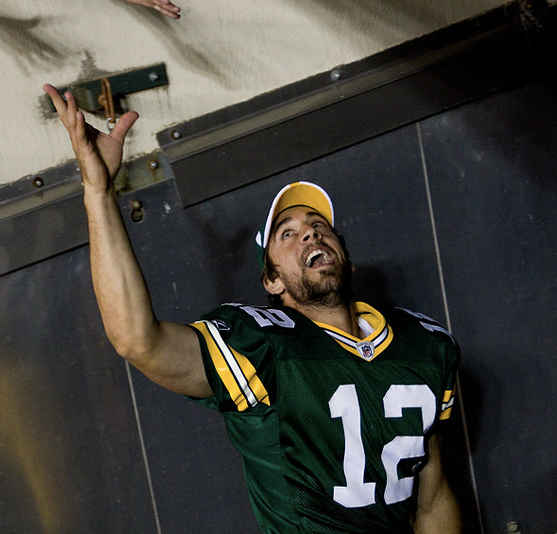 Aaron Rodgers, the Green Bay Packers star quarterback, winner of numerous MVP awards and championships, his star has seemingly faded a bit in recent days from backlash over refusing vaccination for COVID-19 and “misleading” others as to whether he did or not.

This article is not a pro or con argument for him or his actions, but an attempt to allow his actual Vedic horoscope to speak for him in some way, letting everyone make their own conclusions with added perspective.

For this brief analysis of the chart of Aaron Rodgers, I will be using the techniques of Vedic astrology including its sidereal zodiac (more astronomically accurate) and the Vedic interpretation methods, which typically are very clear, direct and accurate in their findings.

His chart has been verified to be accurate, taken from his birth certificate (AA according to the Rodden rating).  Rogers was born on December 2, 1983, at 2:50 pm in Chico, California.

The next three paragraphs are a bit technical, so if a lot of astrology jargon makes your head spin, I recommend skipping them.

Dispositors in Aaron Rodgers’ Horoscope, What Are They?

I’m going to employ the use of dispositors in the horoscope; that is, the planet that rules the sign that another planet is in and which has an influence over that latter planet.  In order to do this, you need to understand which planets rule which signs according to the astrological tradition.

For instance, if a person’s chart has Mercury in Aries, then Mars becomes the dispositor of Mercury because Mars rules Aries.  So, the condition good or bad of Mars in said chart is going to have a consequential good or bad influences over the operation of Mercury in that chart. I find this to be a very helpful and simple technique to employ in getting to the heart of matters. 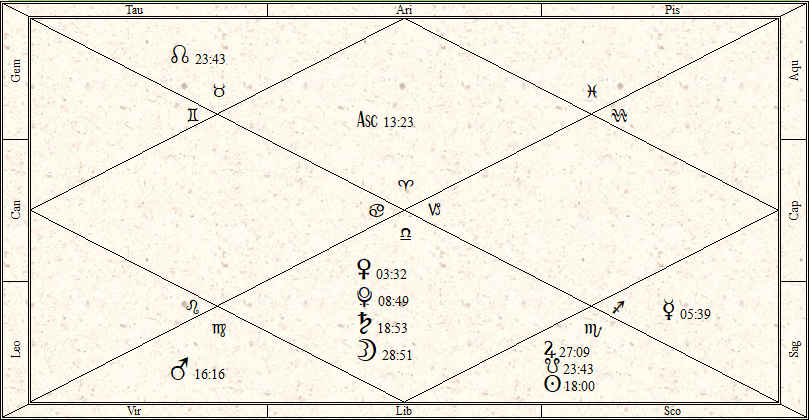 Aaron Rodgers’ chart has Aries rising (ascendant), which immediately shows him to be a man of action, possible impetuousness, and independent; that is, less cowed by social censure as others might me.

Turning then to the planet disposing his Aries ascendant, Mars, we find it to be in resourceful, tactical and focused Virgo.  Virgo denotes success that is brought about over time by persistent and focused practice, diligently (as well as shrewdly) working on the fundamentals and technique.

Rodger’s Wikipedia page mentions how at an early age he was told by his father not to drink and party in college otherwise his football practice would suffer, which he followed.  Biography mentions how he could silently watch and entire NFL game at the age of two and by five years he could identify the different formations of the teams playing and he could throw a football through a hanging tire.

Turning to Mars’ disposing planet, Mercury, it sits high up in the auspicious ninth house, indicating his efforts (Mars) can be well recognized and rewarded.  He was a star athlete in high school and college, overcoming his short height disadvantage.  Mercury in Sagittarius, while very intelligent can also delay or impede Mercury’s effects, since it is debilitated in that sign.

So, while he’s had great recognition, it didn’t come altogether very easily as he had to wait years, passively biding his time (waiting for the draft to pick him, waiting under the shadow of Brett Favre, etc), before he started to be recognized.  Now, of course, success is clouded by other issues, apropos to a debilitated Mercury.  More on Mercury later in this article. 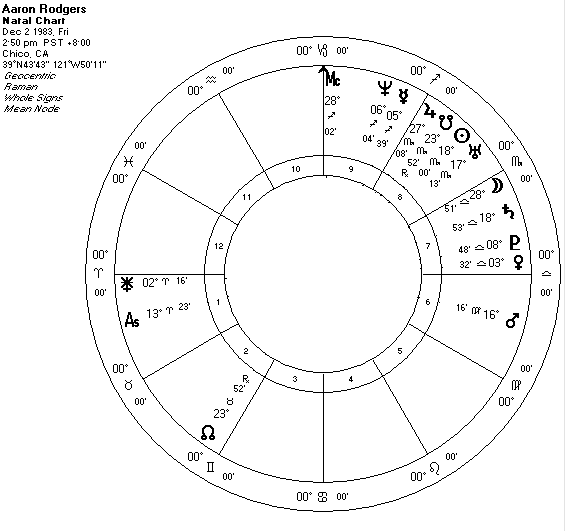 Turning then to Mercury’s dispositor in Rodgers’ chart, Jupiter (ruling Sagittarius, where Mercury lies in his chart), it falls in Scorpio in the eighth house, conjunct the Sun, Ketu (South Node) and Uranus.  This is a powerful position for Jupiter, albeit significantly raising the risk/reward quotient in his life.  In Scorpio Jupiter’s idealism may be manipulated or subverted for questionably ethical gains.

All of Rodgers’ Scorpio planets, four of them, are disposed by Mars in Virgo, which could be thought of as a very earnest-like sign.  So, Rodgers probably feels like he trying to do the right thing.

With the Sun representing his basic life-energy, the effect of Jupiter upon it increases his output, daring, and good fortune in life professionally as well as financially.

There is an added recklessness to this Jupiter component to his horoscope, which drives success, but also a potential arrogance at times, such as after defeating the Chicago Bears in October 2021, taunting them saying “I own you!”.

With an afflicted Jupiter, truth can become a relative thing to what you want to get out of it, as we might see with the current troubles stemming out of the COVID-19 global situation.

The same goes for having a debilitated Mercury as well, facts and truths can be twisted or distorted.  The normal accuracy and clarity of Mercury now is reduced in favor of broadly applied philosophical or spiritual “spins”; i.e. “reality” becomes a little malleable, and actions (impulsively for an Aries rising like Rodgers) can be more easily justified.

Pulling in a much more Western astrology element, we can see also that Aaron Rodgers’ Mercury is in partile (within one degree of exactness) conjunction with Neptune, the planet of illusion and delusion.  Idealism or philosophy may gain ground over practicality.

In practice such an ability to “create his own reality” can be a great ingredient for personal success; i.e. defying the negatives of external factors.  Success also has a visionary quality, one becomes inspired by one’s own vision of himself; which no doubt helped Rodgers in life. 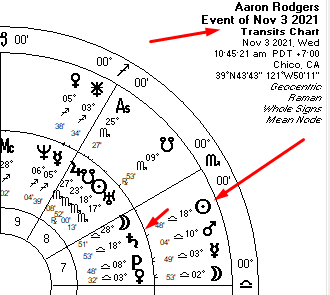 Jupiter conjunct Ketu also can have the tendency to seem to backfire in life, i.e., some of his “plays” in life will not work, giving some hard lessons in humility.  Ketu is an influence that causes one to follow one’s heart, as it were, regardless of the consequences.  In this case, Rodgers followed what he believed was best for his body, which could have been a good choice, but somehow it puts one at odds with prevailing social trends and the resulting turbulence that occurs.

Looking at his Sun/Jupiter in Scorpio it is conjunct Uranus, which likes to be out of the constraining box of societal boundaries, he starts to become like an outlier renegade, as well as somewhat ruthless in his application.

However, having four planets in Libra, including a Venus and Pluto in conjunction, he also has a great amount of compensating charm and grace, as well as a balanced and refined outlook on life.  Saturn exalted in Libra in this chart, ruling his tenth and eleventh houses, indicates a strong and long-lived success and notoriety in life.

Aaron Rodgers also has a very spiritual chart as well, with Mercury in Sagittarius conjunct Neptune, as well as Jupiter, ruler of the spiritual twelfth house, in the powerfully transformative eighth house conjunct Ketu, the Moon’s South Node.  His feet are on the ground (and he can run pretty fast) but his head is in the clouds.

The Moon, Venus, Saturn, and Pluto in the seventh house can indicate a lot of relationships and a lot of potential issues blocking real intimacy, a sort of defensiveness perhaps, but which in later life probably will work out for the better. 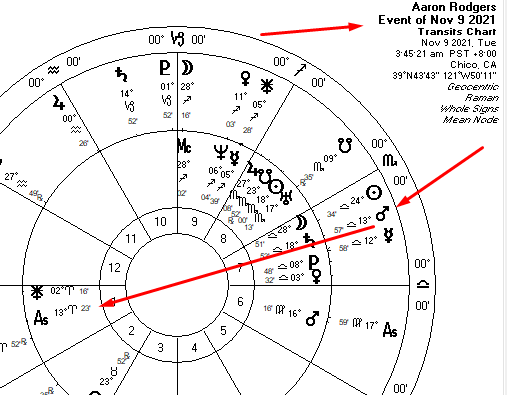 Aaron Rodgers as a Fighter in his Horoscope

Mars’ Vedic fourth house aspect on Mercury further accentuates in impulsiveness and/or verbal aggressiveness, which is not always going to work in his favor.

The Sun in Scorpio in the eighth house with Aries rising can indicate an individual who is not afraid to wrestle with the stickier issues of our times, less concerned about making everyone happy, but attempting to honor what they feel is a greater truth.  Mars in the sixth house further corroborates the fact that he is a fighter in life, he doesn’t give up, whether it’s on the playing field or in the area of public debate.  Mars in Virgo can also have a stake in issues of health, which this Covid-19 vaccine debate certainly addresses.

It’s quite interesting to see that the very day that Rodgers admitted to not being vaccinated, November 3, the transiting Sun was exactly conjunct his natal Saturn, which is sort of like a cosmic “gotcha” if ever there was. (see figure 1)

Only a few days later, exactly as Mars moved into partile opposition to his ascendant degree did he openly say he “mislead” some people about his health status regarding the COVID-19 pandemic.  No doubt a strategic move (Mars in Virgo) to forestall any legal vulnerabilities. (see figure 2)

Aaron Rodgers’ transits indicate some intensity from the period of December 2021 to March 2022 as both Uranus and Saturn aspect his natal Saturn, peaking on December 5, December 28, 2021 and March 2, 2022.  It may not be the smoothest time for him, his honor and integrity will be under fire, which helps make or break an individual’s social character. (see charts below) 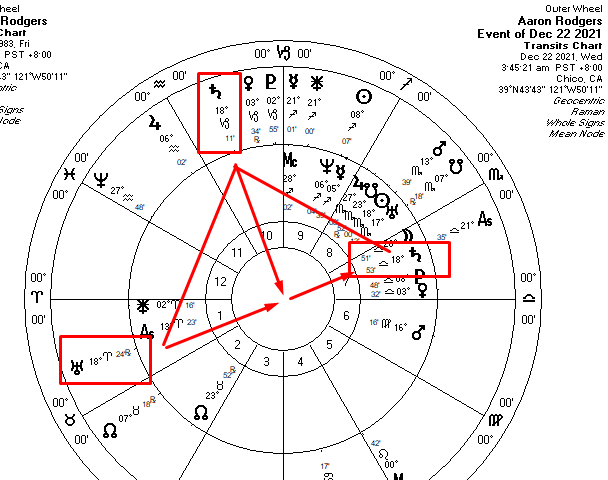 Major Transits for Aaron Rodgers winter/spring 2021-22, transiting Saturn and Uranus in square and opposition to his natal Saturn 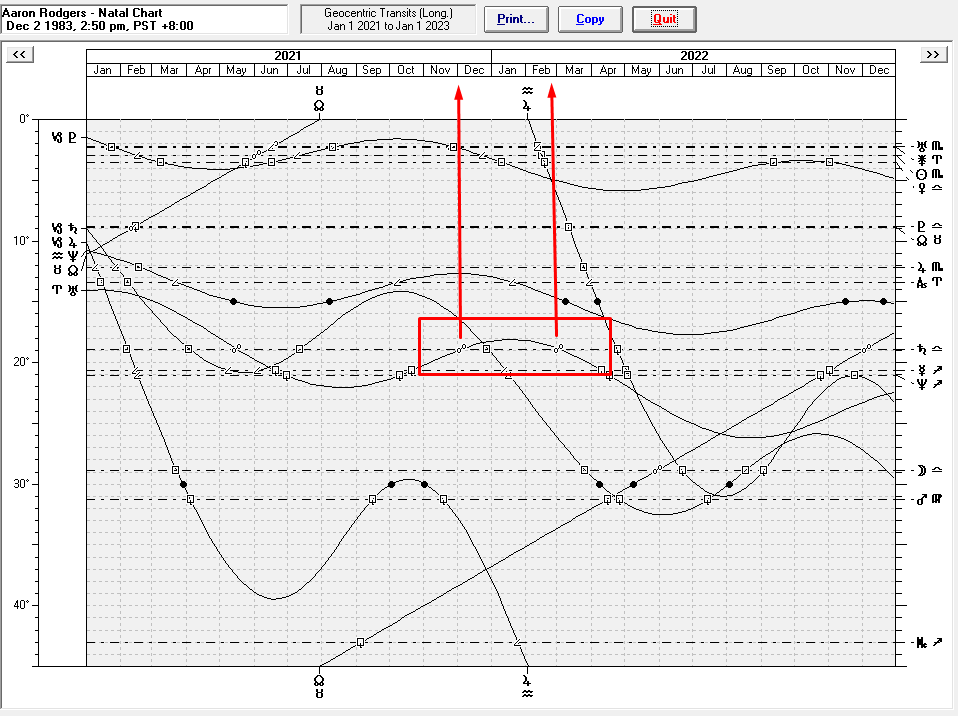 During the same time period approximately, his tertiary progress Venus will be making a station over his natal Moon, which to me helps smooth things out nevertheless for Rodgers.

In April 2022 minor progressed Uranus will be exactly conjunct his natal Jupiter, which could deliver some very exciting and positive developments for him.

Right now, his current sub-dasa situation is Mercury-Jupiter, which corroborates his highly verbal and ideological space he’s in now, not to mention a currently good run of wins leading the Packers.  (see figure 3)

However, in August 2022, the start of a new season, he moves into Mercury-Saturn, which may be somewhat bittersweet but at the same time beneficial for him, helping him to adjust further yet into his more authentic fulfillment.  There may be endings and new beginnings in his relationship life.

In August 2022 Rodgers will be in the last phase of his Mercury maha dasa, taking his spiritual final initiations, as it were, under Saturn’s stern tutelage until April of 2025.

Then Rodgers moves into a seven year Ketu (South Node) dasa from 2025 to 2032, which may indicate some sort of withdrawal or retirement of a sort, gaining some significant lessons in humility, which for a Sun-Jupiter in Scorpio and Aries rising may be challenging indeed.

We could say that Aaron Rodgers has yet to fully experience the peaking of his current astrological cycles.  The rest of the 2021-22 season he may be under fire somewhat, but under the protective influence of Jupiter’s sub-dasa, he’s somewhat shielded from the worse (he is a very successful player and continuing to bring in the ratings).

In August 2022, the start of the new season, under Saturn’s sub-dasa influence he may be continuing to struggle dealing with possibly compounding developments.

Later years, after 2025, Rodgers may be moving on to deeper challenges and victories.