The Death of Philip Seymour Hoffman

Actor Philip Seymour Hoffman, was found dead on February 2, 2014 in his hotel room, suspected as a victim of a heroin overdose. This article will use Vedic astrology charts and techniques, combined with Western astrology techniques, to try to make sense of this event.

I will start off from the rectified version done by Isaac Starkman of July 23, 1967 at 2:39:28 am in Fairport, NY, but I have rectified it earlier to a time of 1:46 am. There are other versions such as a Sagittarius rising version by Sam Geppi.   All of these have their good points, and I don’t propose to have done the definitive rectification on Hoffman’s data. For the purposes of this article though, I think it will suffice and not everything I mention here is exact-birthtime-dependent.

I will be using the sidereal zodiac (Raman ayanamsha) for the chart calculations. Natal chart is at left, western chart with transits is below.

There are some fairly obvious actor/performer signatures in this chart. There are two planets (the Sun and an exalted Jupiter) in the third house, flanked by benefic planets Mercury and Venus (forming shubakartari yoga, giving honors and good fortune.) 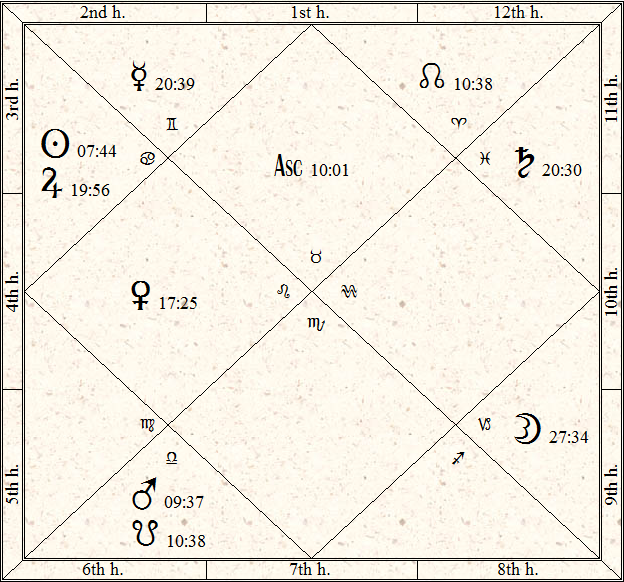 The disposing planet of the Taurus ascendant, Venus, is in extroverted and dramatic Leo; which is also quite high in shad bala measurements; which has the effect of making him strongly creative, likeable, and respected for his work.

The ruler of the tenth house of career, Saturn, is in the impressionistic sign of Pisces in the eleventh house of gains and good fortune; which is also in tight trine to Jupiter. So his career and financial life would be amply honored and rewarded, which he indeed was having earned multiple Academy Award nominations, including winning the Oscar for best actor in 2005 with the movie Capote. Actors seem to have an affinity with the sign Pisces, as affectation seems to be a particularly Piscean trait.

With his Mercury in tight square to his Saturn, Hoffman, may have had a tendency to see only the “negative” side of things, at times tending towards depression and pathological behaviors such as drug addiction.

Hoffman was also a full moon person. Charts with the Moon fully illuminated by the Sun (as in a full moon), indicate generally good fortune and strength of character in life. Seymour’s Moon was in Capricorn, the sign of its debility, which causes me to say that he could have suffered from symptoms and behaviors commonly known as depression to a degree or another; which would have contributed to his addictive tendencies, which he admitted to.

Hoffman’s Moon was also very late in its sign, 27 degrees, considered an affliction in Vedic astrology. Therefore having an afflicted planet disposing one’s Sun (Hoffman’s Sun in Cancer, which is ruled by the Moon) can help contribute to dysfunctions of one’s main sense of the self, represented by the Sun.

Seymour’s Moon was also afflicted by Mars making Vedic fourth house aspect on it from the sixth house. Mars itself in his chart is in debility in Libra. Having Taurus rising can also make one susceptible to addictive behaviors, craving excessively sensations and experiences.

Seymour’s Mars could be said to be a fulcrum point of his chart, seemingly tipping his life in different directions; it is debilitated in Libra, but according to Vedic astrology that debilitation is cancelled because his Mars is disposed by an angular planet, which turns it into a significantly positive planet in his chart.

His Mars therefore could have given him great drive and determination to succeed at his chosen field, rising above the competition. It also could have been the source of his ultimate demise, which we’ll see later here.

Corroborating that, the North Node in Aries in Libra in the twelfth house may have made Seymour very competitive and aggressive in pursuit of his acting career, and being able to play the “heavy” at times; but it could have also added a recklessness to his pursuit of pleasurable/addictive activities. With the North Node here disposed by a debilitated Mars could have caused him to have enjoyed risking death pathologically.

Saturn in Pisces making Vedic tenth house aspect on this eighth house would have contributed to a shorter length of life, or less vitality to resist death, as it were, in the case of this apparent drug death. 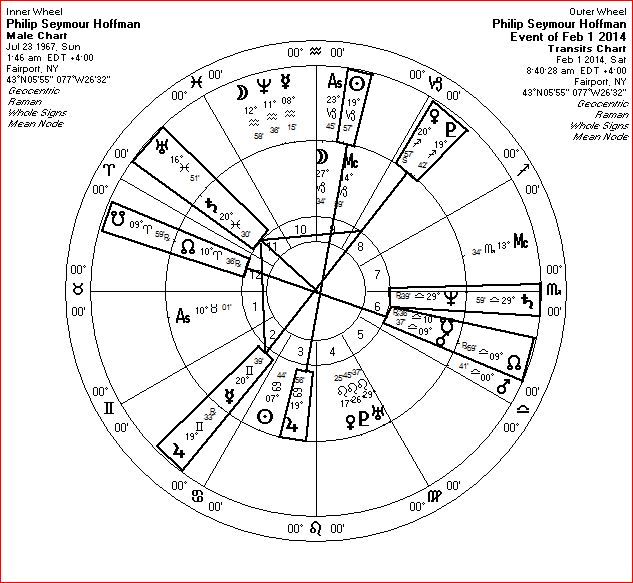 At the time of his death, Seymour was undergoing a number of very tough and challenging transits to crucial points in this chart.

Both Uranus and Pluto in square to each other in the sky, were conjunct and square to his natal Saturn (having aspect to his natal eighth house that determines length of life and vitality), Jupiter also configured in.

He was undergoing a “node reversal”, the transiting North Node was conjunct his natal South Node, and vice versa. This transit was compounded by the fact that his South Node is closely conjunct a Mars in its fall in Libra in the sixth.

Transiting Saturn was also in partile (within one degree) of conjunction to his natal Neptune. He may have been feeling challenges quite acutely, pushing the envelope quite severely on the boundaries and expectations regarding life’s happiness for him. Life sometimes takes us out of a comfort zone; and comfort being so important to a Taurus rising individual such as Hoffman, he may have sought solace and escape from all the challenges. His Moon in Capricorn may have tended to paint a little too “gloomy” picture of life for him right now.

Having two planets in Cancer in this chart including the Sun, emotions would play a bigger part than normal in his life, and he could have been swayed by the roar of emotions which at times will seem to exaggerate the severity of things.

I can’t entirely rule out the element of foul play with the node reversal and Mars in the sixth and twelfth house axis either.

Transiting Jupiter was also conjunct his natal Mercury, which may have had the effect of skewing his perceptions and thinking that nothing was impossible, adding to his recklessness in disposition. Venus was in station exactly opposite his Mercury as well, along with Pluto. All these planets could have contributed to his sense of being removed from this scenario of life and taken to a world of fantasy and wonderment, which was unfortunately a delusion, probably facilitated by drugs.

Regarding Vedic dasa periods, the rectified time that I chose one of the reasons was that on Feb 1, 2014 (one day before death) he entered a third level dasa period of Mars, the planet which rules his twelfth house of self-undoing and also his maraka (killer) seventh house, which itself was debilitated (albeit cancelled debilitation).

Lastly, on the very day of this apparent overdose, the transiting Sun was in exact opposition to his Jupiter; which is a very clear “doing things over the top” configuration. He may have found himself on a very BIG trip, one which he unfortunately was not returning from.

Again, this is not the definitive rectification of Hoffman’s chart, but it perhaps can show us the very same parts of us that give us great depth of sensitivity and passion, if they are not controlled can then also become the parts that lead us to actions  and tendencies that can have very negative and potentially fatal results.

Some have said that Hoffman could have been the victim of “star-whackers“, along the lines of Heath ledger, Michael Jackson, and David Carradine allegedly to have been the victim of.   Others might say that he was his own worst enemy.  But even in death the soul of Philip Seymour Hoffman may have delivered an important lesson to the world.