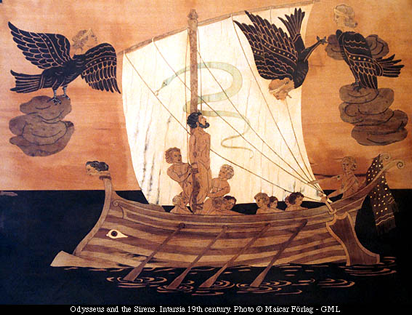 “Odysseus can hardly speak without lying, or act without treachery.  It is true that the other Achaeans do not quite equal Odysseus in dishonesty, but not because they would not, they envy and admire him, and look up to him as a model character; the poet who pictures him considers him a hero in every respect; even the goddess Athena praises him for his lying.”

This is from “The Life of Greece” by Will Durant; the second volume in his epic “The History of Civilization”.  Portions of this chapter are edited for brevity here.  CB

As we read Homer the impression forms that we are in the presence of a society more lawless and primitive  that that of Cnossus or Mycenae.  Probably we misjudge it by seeing it in the violent crisis or disorderly aftermath of war.

There are, it is true, many tender qualities and scenes.  Even the warriors are generous and affectionate; between parent and child there is a love as profound as it is silent.  Odysseus kisses the heads and shoulders of the members of his family when, after their long separation, the recognize him; and in like manner they kiss him.  Agamemnon himself is capable of tears so abundant that they remind Homer of “a stream pouring over rocks.”

The other side of the picture is less pleasing.  Achilles treats Priam with fine courtesy, but only after dragging Hector’s body in mangled ignominy around the pyre.  To the Achaean male, human life is cheap; to take it is no serious matter; a moment’s pleasure can replace it.  Piracy is still a respected occupation; even kings organize marauding expeditions, plunder towns and villages, and enslave their populations;”Indeed,” says Thucydites, “this came to be the main source of livelihood among the early Hellenes, no disgrace being yet attached to such an occupation.”

Odysseus  is insulted when he is asked is he a merchant, “mindful of the gains of his greed”; “but he tells with pride how, on his return from Troy, his provisions having run low, he sack the city of Ismarus and store his ships with food; or how he ascended the river Aegyptus “to pillage the splendid fields, to carry off the women and little children, and to kill the men.”

To this lighthearted relish for robbery and slaughter the Achaeans add an unabashed mendacity.  Odysseus can hardly speak without lying, or act without treachery.  Having captured the Trojan scout Dolon, he and Diomed promise him life if he will give them the information they require; he does and they kill him.  It is true that the other Achaeans do not quite equal Odysseus in dishonesty, but not because they would not, they envy and admire him, and look up to him as a model character; the poet who pictures him considers him a hero in every respect; even the goddess Athena praises him for his lying.  “Cunning must he be and knavish,” she tells him, smiling, and stroking him with her hand, “who would go beyond thee in all manner of guile, aye, though it were a god that met thee.   Bold man, crafty in counsel, insatiate in deceit, not even in thine own land, it seems, was though to cease from guile and deceitful tales, which thou lovest from the bottom of thine heart.”

In truth we ourselves are drawn to this heroic Munchausen of the ancient world.  We discover some likable traits in him, and in the hardy and subtle people to which he belongs.  He is a gentle father, and in his own kingdom a just ruler, who “wrought no wrong in deed or word to any man in the land.”  “Never again,” says his swineherd, “shall I find a master so kind, how far soever I go, not though I come again to the house of my father and mother!”

The secret of the matter is that the Achaean’s standard of judgment is as different from ours as the virtues of war differ from those of peace.  He lives in a disordered, harassed, hungry world, where every man must be his own policeman, ready with bow and spear, and a capacity for looking calmly at flowing blood.  “A ravening belly,” as Odysseus explains, “no man can hide….Because of it are the benched ships made ready that bear evil to foeman over the unresting sea.”

Since the Achaean knows little security at home, he respects none abroad; every weakling is fair play; the supreme virtue, in his view is a brave and ruthless intelligence.  Virtue is literally virtus, manliness, arête, the quality of Ares or Mars.  The good man is not one that is gentle and forbearing, faithful and sober, industrious and honest; he is simply one who fights bravely and well.  A bad man is not one that drinks too much, lies, murders, and betrays; he is one that is cowardly, stupid, or weak.