After some research and use of Vedic rectification techniques, I have made a rough pin-pointing of the actual birthtime of Michele Bachmann, and the chart seems to work.

Let me say first of all, that this is not an official rectification on my part, when I do that with clients I have a rigorous data-finding process that I go through with them. The case with Michele Bachmann is that there is not very much time- and date-specific information available in the public record. Take this information that I present for what it’s worth.

However, I think I have latched onto something. Remember that I am using Vedic astrology with its sidereal zodiac. Vedic astrology is an art that lends itself well to quick birthtime rectifications. I have determined that Bachmann was born at around 4:50 pm, on April 6, 1956, in Waterloo, Iowa.

(Note: another birthtime has cropped up, supposedly 12:08, but whether it is am or pm is not specified.  The article in question is no longer available.  As I said there was very little time-specific information on Bachmann available without some heavy research, and I qualified my rectification as “what it’s worth”, but for now I am going to let this article sit.  Hopefully more info to come.  CB)

Bachmann’s Sun, Indicator of Authority and SuccessChange is an Elective Process

Bachmann’s Sun denotes a type of faith-based activism with a real endeavoring for some sincerity, and a certain amount of assured success in life.  Her Sun is in the sign of Pisces, disposed by Jupiter exalted in Cancer, and her Sun is in the navamsa of Aquarius.

The Jupiter supporting Bachmann’s Sun is weakened, however, by being very late in the sign (29 degrees,) giving Jupiterean blurs of distinction on subjects, forgoing necessary details in favor of that “wow” feeling that the so-called big picture gives.  However in the navamsa chart (a subchart of the natal chart), her Sun is disposed by an exalted Saturn in the ninth house, adding much more of a sense of honesty and legitimacy to her Sun.

I should say also that Bachmann’s Sun very late in the sign, serves to afflict the expression of her Sun, her base of power and authority. Sun-dysfunctions in a chart can come out as a seeking to be over-domineering, seeking to compensate for an internal feeling of inadequacy. In the other extreme, dysfunctional Suns in people’s chart can come out as passivity, which then sporadically expresses itself in unusual, uncharacteristic or inappropriate ways.

Bachmann as a Tough Customer 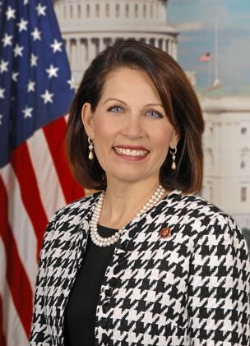 Bachmann’s Moon in Aquarius in the sixth house, gives her a real “in the trenches” aspect to her life, where she served in the machinery of government gaining valuable experience. Indeed, Bachmann was a lawyer for the IRS (a little bit incongruous with her political rhetoric) prosecuting those who didn’t give their so-called fair share to the government.

Bachmann in effect was an “enforcer” for the IRS, which itself is kind of an enforcing operation of the Federal Reserve Bank, itself being sort of a loan-sharking organization. Astrologically this kind of attribution can be seen with her Moon in the “vicious” sign of Scorpio in the navamsa, and then her natal Moon disposed by Saturn in Scorpio in the third house, both of which have very aggressive connotations.

Michele Bachmann’s husband, Marcus Bachmann, would be signified by her seventh house and the planets therein. Having the Sun in Pisces in the seventh house, could mean a spouse with a definite spiritual orientation, but the afflicted nature of the Sun and its disposing Jupiter, along with a debilitated Mercury could point to a spouse who blurs distinctions in favor of ideologies, or who possibly tends to paint their self in a way with is contrary to what they really are underneath, and who could be a liabilty down the road.

Michele herself as a crusader can be seen with her exalted Mars in Capricorn in the fifth house and her strong Venus in the favorable ninth house. Venus is also in aggressive Aries in the navamsa chart. Mars for her is exalted and in the same sign in natal and navamsa charts, a condition of good dignity called vargottama; but it is still somewhat weakened by being of low degrees and in the twelfth house in the navamsa. This could mean that her drive to succeed is very strong and she will go far, but the motivations behind it all could be somewhat problematical, which could lead to problems down the road having to do with hidden secrets.

If you use the Moon as the ascendant (chandra lagna), the rulers of the tenth and twelfth houses are in mutual reception, which again corroborates the idea of notariety based on ideologies or religious convictions, but that can be a political minefield to play in. Michele is known for her “gaffs” verbally in the campaign trail, and that can be seen in her debilitated Mercury in Pisces, which causes her to neglect the necessary due diligence with details (you know, John Wayne Gacy instead of John Wayne the actor).

However she has the raw audacity to continue on in the face of seeming to put her foot in her mouth, which you can see time and again on YouTube, but this very quality makes her very tenacious in pursuit of her goals.

Michele’s tenth house, is flanked by benefic planets, giving good luck with advancement and overall success; called shubakartari yoga in Vedic astrology. However, her fourth house, signifying her early life, influence of her mother, and her inner emotional life (as well as her present day domestic atmosphere), has the opposite, being flanked by malefics, Mars and Saturn. Called papakartari yoga, possibly indicating some suppressed rage or anger possibly based on some experiences in her early life or with her parents, if she hasn’t already resolved them.

Sometimes people with these configurations will tend to behave in a domineering or even cruel manner, or possibly have a warrior-like response to stresses. At any rate, such configurations can contribute to the will-power necessary for success.

I want to focus on indications for her immediate future, specifically during the election and run up to 2012. Bachmann seems to be in the spotlight and gaining momentum, and this matters regardless if you think elections are scripted by the financial powers who own and run the media, and who are involved in much of government operations already.

I would say that Bachmann has a lot going for her, and that things look good for her straight through Election Day 2012 and supposedly an inauguration on January 20, 2013, whether she could be the Republican Presidential or Vice Presidential candidate (possibly with a Mitt Romney or a Rick Perry).

During the better part of 2012 Jupiter will be aspecting her Venus in rulership and her exalted Mars, giving her a lot of enthusiasm and steam to move forward. Saturn will also be in opposition to her Sun and Mercury, and that would indicate the pressures and struggles of the campaign, possibly dealing with attacks on her character and other such troubles (maybe scandals with her husband).

The Vedic dasas (planetary periods) are not quite as good, but do give one pause to think that things are in the favor of Michele Bachmann for 2012.

Taking a look at the big picture cycles-wise with Bachmann, she entered a long great dasa of Mercury in January 2010 (seventeen years.) Mercury is her tenth house ruler, and therefore she could be coming into prominence during this time. The afflicted nature of Mercury in her chart may symbolize her harrowing experiences in her public life, including mistakes and misfortunes. But her sub dasas during the later parts of the campaign look interesting as she enters Ketu (Moon’s South Node) in June 2012.

Ketu is malefic, but it is in the positive ninth house of her chart and is disposed by a well-dignified Venus, she may experience setbacks at this time, but still luck will be on her side. The Venus-Ketu connection makes me think scandals regarding love or spouse.

Yogini dasas (not shown) look similar with her entering a long Venus dasa in 2010 at the start of her bigger political career, and then entering a Nodal sub dasa through the election season (disposed by an exalted planet). Narayana dasas look favorable, ashtottari dasas not quite as well.

I won’t delve into the murkiness of the realities of the electoral system in America right now, but nevertheless, elections these days are more branding and marketing than actual leadership. Candidates these days are mostly spokesmen for their corporate backers.

Vedic astrology does not use the trans-Saturnian planets, and there usually is not a need to include them, but I wanted to highlight some of her western chart features (shown above, sidereal), which some people will surely notice.

She has three tight oppositions in her chart, two of them to the degree. Oppositions tend to show many features of the person’s relationships, since they are basically in a first/seventh house relationship to each other.

Her Venus opposes Saturn, which can mean strained relationships or relationships that have a distinct age difference, and there can be a distinct repressive or inhibiting character to the relationships. Sometimes that repressed energy will periodically explode out in a pathological manner, and sometimes strange behaviors.

Then also Michele has the Moon in tight opposition to Pluto, indicating deep, intense feelings and emotions with strong compulsive or obsessive qualities, frequently sexual. So I want to point out two strong patterns here: one is extremely repressive, the other is extremely intense licentious, if you will.

Unless the person is a literal saint, you might speculate that the private life of such an individual encompasses more than is presented to the public eye. The opposition of Mars to Uranus doesn’t help here either, causing extreme instances of emotional fervor, which can border on hysteria, as well as ertatic, unpredictable behavior. Such a person also has a predisposition to challenge the social order.

We can see then two malefic planets in the seventh house from the Moon and Venus, which could mean a very domineering, powerful, or even intimidating partner/spouse type of situation. This is not inappropos to Michele’s husband, Marcus, who is very militantly anti-gay. Marcus Bachmann to me though, has a kind of Ted Haggard vibe to him; i.e. not entirely what he claims to be.

Why is this information relevant? It may be that there are compromising skeletons in Michele Bachmann’s closet, and these are liabilities in her life that could be held over her in order that she be coerced into policies and actions that she otherwise wouldn’t do. Bachmann is a supporter of Israel and if she started to waver from the pro-Israel track (which is strongly pro-war in the Middle East, but not necessarily good for the USA), she could be easily brought back into line.

Most prominent political figures have these kind of configurations in their charts, indicating that they are beholden to other interests not normally on the radar screen. They are conveniently malleable. This is a fact in politics; because candidates always say one thing, and then do something completely different. There are differences in rhetoric, but the actions taken always point back to a financial-corporate elite that always benefits.