May 2020: Comet Atlas, Serving Others to Serve Oneself 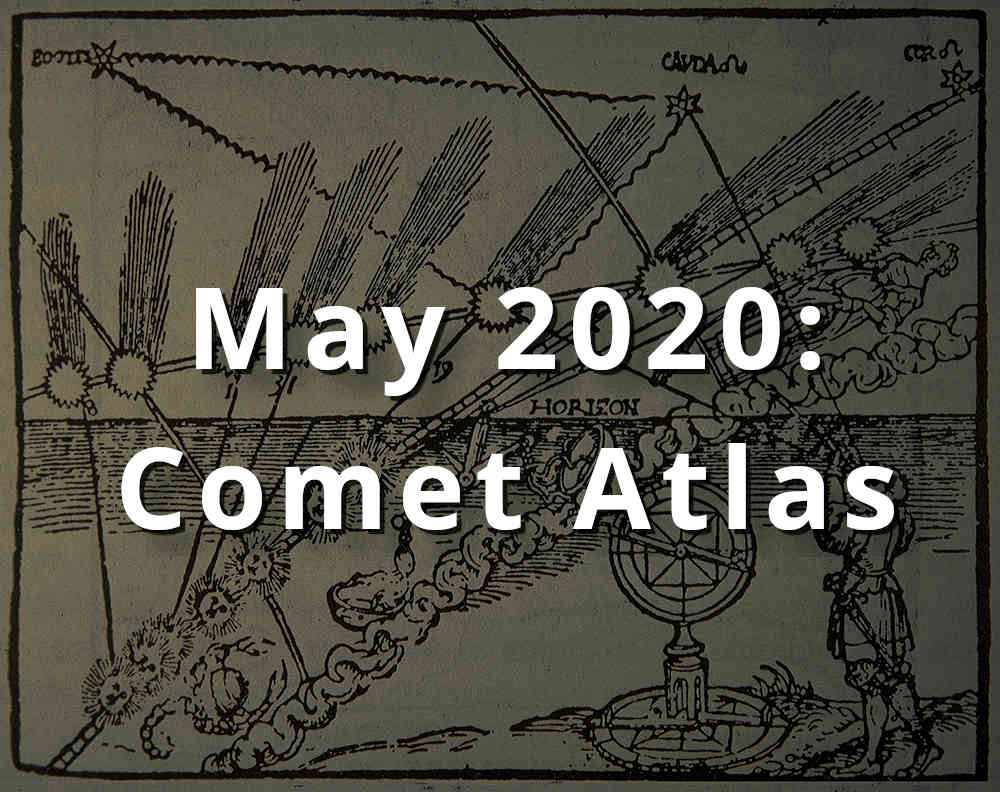 May 2020 is a relatively active astrological month, starting out with the Supermoon of May 7 and three planetary stations in close succession, plus asteroid Juno turning direct this month. 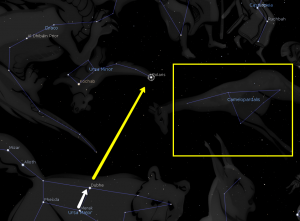 How to see comet Atlas. Click image to enlarge

Comet Atlas will make its closest approach to Earth on May 23, in the constellation of Camelopardalis (The Giraffe), just off Polaris, the North Star.

To find the North Star, look for the “pointer” of the Big Dipper making a line with the bright star in the sky; it should seem like a fuzzy patch with maybe a tail, potentially only second to the Moon itself in brightness in the sky.  Sometimes though comets are “duds” that is, their anticipated brightness never manifests.

Comets in ancient times, when people we more sensitive to the messages in nature, looking somewhat like an arrow or spear in the sky, were regarded as bad signs, harbingers of death, war or some other cataclysm or misfortune.

Fortunately, if the above was true, comet Atlas has already appeared to have broken up, appearing more as a “mist” in the sky rather than a hurling pointed object.

Over the course of four days, May 10-14, there will be three planetary stations.  So, the middle of May will be certainly developmental in one way or another.  Saturn, Venus, and Jupiter; I think that relationships are going to take a turn.

Whenever Saturn and Jupiter interact, in almost any way, there seems to be a more realistic approach to things coming about.  Therefore, with Venus in between them in time, we may have some coming-to-reality in interactions and the patterns thereof.

Then on May 26, the relationship-asteroid, Juno, turns stationary direct itself.

It’s easy, of course, to wax wise (pontificate) on love and relationships; but is there a greater measure of what one will do for others, that doesn’t count the costs, the time, or the sacrifices involved than love?

Ulterior motives for doing things such as monetary gain, fame, or getting something else in return leave us in the end as grasping, spiritually bankrupt individuals.  When youth fades, credit vanishes, and strength in the limbs decline, where are you then, and what to you have to offer?

You may as well be kicked to the side and left for dead, just like the many disenfranchised in society today; the old, the sick, and the poor.  As one person of (dubious) renown called them, “useless eaters”.

That’s all fine and good for those currently in good standing, but as the wheel of karma turns, what once you withheld from others when they needed it will be withheld from you when you need it.  So, love transcends karma, criteria, and other so-called standards; when you serve others, you’re serving yourself just as well.

Sunday, May 3
Accentuation on relationships, some of which maybe you shouldn’t involve yourself in.  Keep it all on the plane of the heart, not the lower chakras.  (Sun biquintile Juno, Mercury tridecile Pluto, Venus square Neptune)

Monday, May 4
Star Wars Day
Mercury Superior Conjunction
Eta Aquarids Meteor Shower
May the Fourth be with you. Exuberance and excitement. Try to keep in reality, even though adventuristic-escapist, archetypically-derived figures may dominating our various devices, fun as it all may be.  My plea is aim higher than simply Hollywood glitter and flashiness.  (Sun and Mercury tridecile Jupiter)

Wednesday, May 6
Moon at Perigee
New relationship angles and delights. The Moon is closest to the Earth for the month. (Moon opposite Uranus, Juno tridecile Pluto)

Thursday, May 7
Supermoon (Full Moon)
Wesak Festival
On the day of the Buddhist celebration of Buddhas enlightenment, typically the full moon in May, this moon is particularly big, called a supermoon, or a full moon at perigee.  As the Moon later on squares Mars and opposes Algol, Medusa’s severed head on Pegasus constellation, the dial gets turned up.  However, many amazing things are possible all day.  (Mercury tridecile Saturn, Venus quintile Jupiter, Mercury sextile Neptune, Moon opposite Mercury, Mercury sesquiquadrate Juno)

Friday, May 8
Early on we have the kerfuffle that the Moon on the Pleiades brings, but then it rests on the Heart of the Scorpion Antares to stir things up again.

Saturday, May 9
Challenges seek to staunch your enthusiasm, but it’s the testing and refining of that spirit-fire burning within.  Amazing discoveries and reveals, but don’t let the potential sensationalisms of the situations distract you from your actual focuses.  Relationships and feelings soften.  (Mercury trine Pluto, Moon opposite Venus, Sun tridecile Saturn)

Sunday, May 10
Mother’s Day
Mercury at Perihelion
Saturn Stationary Retrograde
On Mother’s Day Saturn stops still in the sky.  Parental and family issues run deep it seems, maybe enabling a more significant understanding of parents who are never as perfect as we think they should be; but they are mirrors to our own shortcomings.  Talk can increase understanding, opening the door to healing.  (Mercury conjunct Algol, Mercury trine Jupiter, Sun sextile Neptune)

Monday, May 11
Maybe lot of ruffled feathers as we move through rough spots in life.  (Mercury conjunct Pleiades square Mars)

Tuesday, May 12
Emotions and experiences run the gamut of human and societal drama as the Moon conjuncts Pluto, Jupiter and Saturn at various times through the day. An overshadowing cautious optimism helps guide the course of the day, as Mercury trines Saturn and quintiles Neptune.

Wednesday, May 13
Venus Stationary Retrograde
The delightfully brilliant Venus, currently as our evening star close to the horizon at dusk becomes stationary until June 25.  Emotion, perceptions, and experiences are full of beauty, setting the stage for a few weeks of a love not quite the norm, possibly struggling to find outlet.  Relationships, love and passion accented as Mars biquintiles Juno and opposes the Heart of the Lion star, Regulus.

Thursday, May 14
Jupiter Stationary Retrograde
Last Quarter Moon
Jupiter the gregarious Roman king of the gods quite close now to his brother Pluto and his father Saturn (Hades and Cronus in the Greek myths) in Capricorn constellation, does a planetary about-face, if you will. Quite a show of force and intent calculated possibly to garner maximum leverage, or to try to turn a stinky thing possibly now as flowery. The Moon on Regulus and Mars, cracks the whip, if you will.

Friday, May 15
Crudity and subtlety come together.  (Sun trine Pluto)

Saturday, May 16
Intensity, severity, and activation of genius.  Sometimes out of the mouths of children and madmen God speaks.  (Mercury sesquiquadrate Pluto, Moon conjunct Neptune, Mercury on Aldebaran, the Eye of Taurus Bull; and opposite Antares, the Heart of Scorpio constellation)

Tuesday, May 19
Brilliancy of action. Daring to succeed.  Insights into what drives people.  (Mar on Formalhaut star, Moon opposite Spica/Arcturus stars, Moon square Jupiter and Pluto)

Wednesday, May 20
Crisis of the heart, puncturing of delusions.  Call for courage.  (Sun on Pleiades stars, Venus square Neptune)

Sunday, May 24
Obsessive or compulsive behaviors and thinking; learn to self-recognize when you get into mental ruts and to disengage from unprofitable behaviors.  (Mercury quincunx Pluto)

Monday, May 25
Memorial Day USA
Serious situations can bring out deep emotions.  Change is not always a conscious or planned-out scenario, it just happens and you go with it, however unusual or uncomfortable it may seem.  (Mars sextile Uranus, Venus biquintile Pluto, Mercury biquintile Saturn)

Wednesday, May 27
Overcome resistance, inertia or defiance.  Snatch victory from the jaws of defeat on this mission-quest that is your life.  (Mars semisquare Pluto)

Thursday, May 28
With Mercury hovering quite close to the Moon’s Nodal axis right now, important connections (mental and physical) are indicated.  Venus on the blue supergiant star Rigel in Orion constellation indicates particular inspiration for relationships.