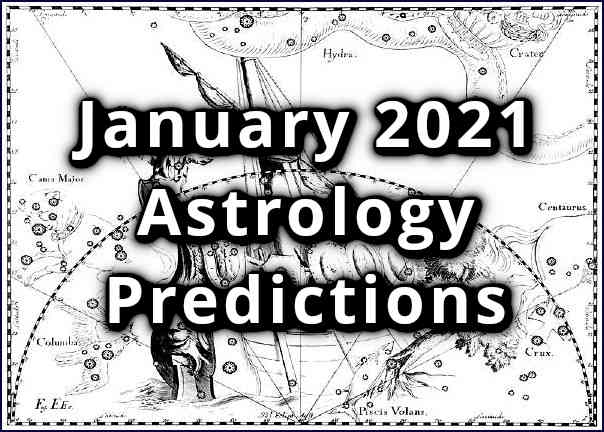 The astrology of Inauguration January 2021 presents a certain set of challenges.  For one thing, it will be a major transition in the White House with Trump exiting stage right.  As the Biden Administration steps forward, it offers fresh winds of change from the arduous previous four years and especially of the last twelve months.  Lets not fool ourselves though, while the figures in the front may change periodically, it’s the forces behind it all that have hardly changed at all.

I have a chart to describe for the Biden Administration, and if it’s anything like the chart of the Trump Administration (quite accurate, that is) then there is a story to tell indeed.  Stay tuned to SWN for that.

The real pressure point for January 2021 astrologically is mid-month as we move through a series of hard and difficult configurations, some peaking right as Biden/Harris take the stage, hands on the Bible.  The loud one may feel enough agitation to shake the scene yet still, not going quietly away.

Over January 13-14 Mars squares Saturn and Uranus makes a direct station widely in square to Saturn and conjunct Mars.  That is about a 8.5 on the astrology Richter scale (I just made that up) out of 10.  Remember that all things are interconnected.  Internal agitation contributes to external agitation.  The elements themselves become mirrors of our consciousness.  So, stay calm and serenely focused on your objectives, much change can be effected.

On January 20, Inauguration Day, Saturn makes semisquare to Neptune.  Anxiety meets confusion and dysfunction.  Not exactly a good thing for the passing of the torch to a new presidential administration.  More on this in a subsequent article.

Saturday, Jan 2
Earth at Perihelion
Today the Earth is at its closest point to the Sun.  Power and authority accentuated.

Wednesday, Jan 6
Epiphany
Last Quarter Moon
The Moon conjunct Pluto day can bring about an hour or two of intensity, best if focused on worthwhile objectives and not simple (and base) desire fulfillment.

Saturday, Jan 9
Moon at Perigee
Get serious, face truth.  After some calm scrutiny it may not be so bad after all.  Emotional and relationship excitements.  (Mercury conjunct Saturn, Venus trine Mars, Moon conjunct Juno and biquintile Mars)

Thursday, Jan 14
Orthodox New Year
Uranus Stationary Direct
Sudden changes, break-though or break-out.  Let the rubble fall as it will, out of the smoke emerges new determination and new life. Supernatural power rises as you claim it, be honorable and truthful. For some it maybe overwhelming. (Sun conjunct Pluto, Mars semisquare Neptune)

Friday, Jan 15
Later on as the Moon contacts Fomalhaut star in Pisces, there could be moments of uplift and release.

Saturday, Jan 16
The Moon aspecting Pluto and Juno today brings interesting and intense emotional and relationship situations.  Choose who you connect with well.

Sunday, Jan 17
Exciting spaces to turn things around, take a new road, or turn the tables on negative situations.  Don’t let opportunities (however erratic they may be) pass you by without some real striving to make them work.  (Jupiter square Uranus, Moon aspecting Saturn, Neptune, Mars)

Thursday, Jan 21
Moon at Apogee
Discontent at times, but act to address the roots of problems, not simply to react to them.  (Moon conjunct Mars and Uranus, Moon square Jupiter)

Friday, Jan 22
Shock and upset at times.  Face scary situations, see how they may mirror your own psyche.  (Moon conjunct Algol star)

Tuesday, Jan 26
Keep on the prescribed track even though you may very well feel you want to jump off the train to where it’s going.  Do not let your freedom feel deterred, we all have to put up with some of the “old ways” for a while yet.  Until we’re ready to take off on our own course.  (Sun square Uranus, Mercury quintile Uranus)

Friday, Jan 29
Mercury at Perihelion
Mercury is highlighted today as the Moon opposes it and it is at its closest point to the Sun.  Powerful ideation.  Be bold with clear vision.

Sunday, Jan 31
Energy and motivation may seem elusive, as you find inspiration though you may make amazing things happen, even if only with subtlety.  (Moon opposite Neptune)