It’s the End: Donald Trump and the Eclipse December 2020

With the Supreme Court now having thrown out the latest attempt to overturn the results of the election in the key states, it’s now obvious that Trump is done politically in Washington.  With his scorched earth policy of running the White House, it seems he’s run out of good karma with people who could have helped him now.  Indeed, it has seemed that Washington and the Republican Party (plus a Supreme Court with three Trump-nominated justices) have turned their backs on him.

Trump now faces a greater reckoning with multiple legal and financial challenges, which he no longer has the protection of the Office of President to shield himself from.  He’s going to have to dig deep to pay off the hundreds of  millions of dollars, sell off a lot of (inflated) assets, and try to find someone (sucker) to borrow him some more money so he can pay off his other loans; and he’s got to do it in an economy ravaged (only just beginning) from the coronavirus pandemic. 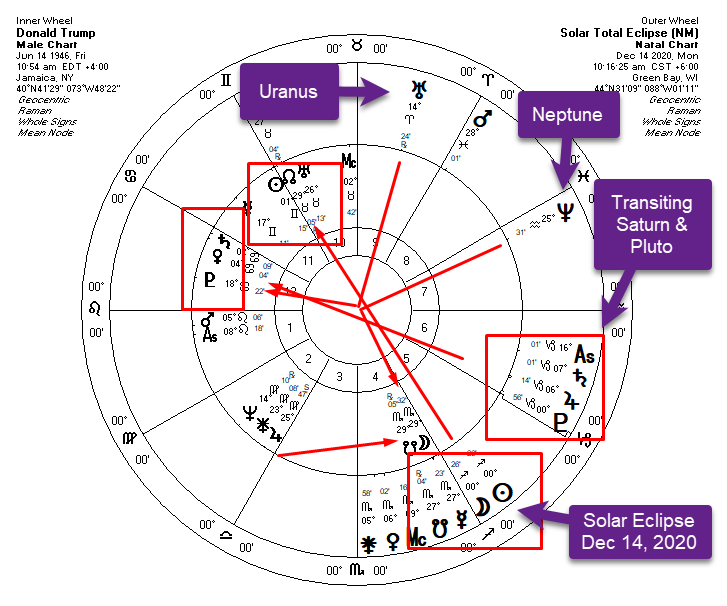 As his astrology clearly shows in the Vedic sidereal chart, transiting Saturn and Pluto are now making long-term aspects to his natal Saturn and Venus in the twelfth house.

The twelfth house represents seclusion, such as in a prison; or significant losses.  Saturn and Pluto in the sixth house, representing legal battles as well as accusers and enemies, indicate a lot of disputation and getting to real justice, a real actual balancing of the scales.

As I’ve also said with Trump’s Vipreet raja yoga, “evil” house rulers in other “evil” houses, he may still come out relatively intact.

Which brings us to the total solar eclipse of December 14 2020, which lands directly on his natal chart Sun-Moon axis.  With the Sun and Moon representing the “power and soul” of Trump, there is an “eclipsing” of that power and soul.  A thwarting.

Not so surprisingly, he has suffered defeat (lost the election), and in combination with the transits mentioned above, nothing very much savory to look forward to.

Not only legal and financial challenges loom, but health issues are indicated, and with the body and mind so inextricably linked mental health is at issue as well.

In the next few years transiting Neptune will be in square to his Sun-Moon axis as well, which can mean much confusion and despair at times, feeling seemingly lost or powerless as a result.  With Saturn ruling his seventh house of marriage partners, his marriage with Melania is sure to have it’s own reckoning as well.

Transiting Uranus in square to his natal Pluto in the twelfth house can also indicate sudden and catastrophic upsets and losses, which ideally have the effect of “liberating” one from material considerations.  Such lessons for those so invested in the world and it’s values (as opposed to a spiritual set of values) it is going to be a hard, hard lesson. See more below.

Speaking of Uranus, the Dec 14 eclipse directly aspects Trump’s Sun, which is also conjunct his natal Uranus; further accentuating that what can happen here will  happen with precipitous suddenness, no room for subtlety. 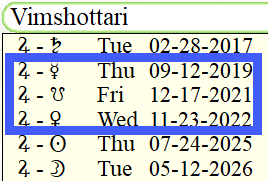 Looking at Trump’s Vedic dasas; he’s been relatively uplifted by being under the influence of Jupiter-Mercury from Sept 2019 running through December 2021, moving then in to Jupiter-Ketu (South Node).  This then suggests a timetable of late 2021 when the more intense personal experiences begin, stripping him of lesser egotistical accoutrements and getting more ready for a profound spiritual experience of life.

This reminds me of the phrase:

“….it is easier for a camel to go through the eye of a needle than for a rich man to enter the kingdom of God.”

Subsequently the apostles said to Jesus: “Who then can be saved?” Jesus looked at them and said, “With man this is impossible, but with God all things are possible.” Matthew 19:23–26

The Jupiter-Mercury phase is also corroborated by the Chara dasa system, which I won’t delve into here (quite complicated), but it would seem his Twittering and other communications will be continuing during this time; possibly with him resuming his involvement with broadcasting.

I think if it weren’t for the coronavirus and the slim margins of the election I think Trump would have won, but Biden also had the astrological edge; and I say this knowing full well that there is election fraud coming from both sides of the isle.

With Trump’s Mars in Leo in the first house, he desperately craves attention and validation, and his tendency to verbosity and bending of truth (shown with debilitated Jupiter in the second house of speech) is employed directly to that end.  We won’t have heard the last of Trump, spiraling downwards with more to fall before he comes up again, very possibly getting increasingly unhinged and outlandish as he does.

Looking on to 2024, the next presidential election and the runup thereof, Trump will have Jupiter moving through his ninth and tenth house, which should give him some karmic “wind at his back”.  At the same time however, Saturn will have moved into his seventh house, the house of partnership and marriage, and will aspect his natal Mars in the first house.  So, while he may have real enthusiasm for the journey and the goal, he will have definite physical, emotional, and mental stresses; which at his advanced age and having perhaps lingering effects from the coronavirus will be detrimental to his ability to carry out actually such a task, being president of the US; that is, without ending up a puppet of greater forces.

Looking at Trump’s dasas in a hypothetical second term, it looks like the second year of that term, in the 2025-26 era could be somewhat good, but the rest of the time nothing particularly good for him is indicated.