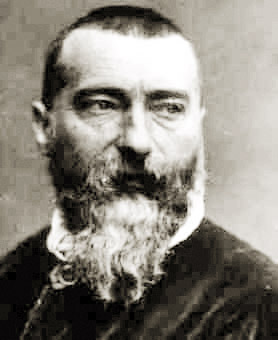 “The more things change, the more they stay the same.”
Jean-Baptiste Alphonse Karr

It’s a new year, new start.  Make your resolutions well.  However, don’t set yourself up for a fall, only to say to yourself “maybe next year….”.

Don’t worry if you stumble and fall, it’s meant to be that way.  Invariably we all have something “dumb, stupid or embarrassing” in our life.  If we were all “perfect” it would mask the subtlest of errors, the most imperceptible delusions would remain.

It’s good that we mess up, because then the egoic tower of Babel can’t get too high.  Imperfection is “perfect”.

Pull yourself together and get back up on that horse.  No, you didn’t have a “perfect year” the only one keeping score is probably just you anyway.  Just be you right now.  Be your best, do your best, where you are….now.

Time is an illusion anyway.  The past, the future; both highly subjective creations of the human mind to try to make sense of things, should have little bearing on your state of mind and being in the present moment.

So, take that unsolicited piece of advice with you into 2019. 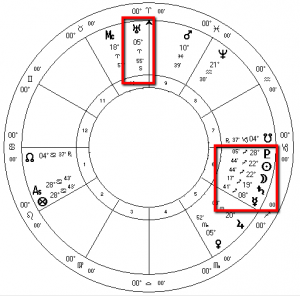 Anyway, January starting us off very quickly gives us some significant astrological pushes, there is a partial solar eclipse on Jan 5/6.  Partial eclipses are not usually that significant, however this unique line up of the Sun, Earth, and Moon in 3D coincides with the planet Uranus also turning direct in the sky.

Moreover, the Sun, Earth, and Moon line up in the same sign that Saturn and Pluto are occupying, sidereal Sagittarius.  So wherever Sagittarius/Scorpio (sidereal/tropical) falls in your chart, there are some new developments almost certain to occur.

2019 precedes 2020, maybe one of the most pivotal years of the 21st Century, in my opinion.  Some things are lining up for a fall economically, politically and socially; then something new will take their place.

When we don’t get our lessons, when our mental, emotional and spiritual density (if you can imagine such a thing) prevents us from further growth, then the Universe takes to crack open that dense shell of insufferable obstinancy with its cosmic crowbar.

Wednesday, Jan 2
The Moon moves closer to the Heart of the Scorpion Antares as well as making aspect to Pluto, maybe bringing out surprisingly strong emotions for good or for ill.  (Moon semisquare Pluto)

Thursday, Jan 3
Earth at Perihelion
The Earth is at its closest to the Sun today, and multiple connections to Jupiter and Neptune can make a pivotal, interesting and mind-expanding day.  Creativity and love and enhanced.  (Moon conjunct Jupiter, Moon square Neptune, Venus tridecile Neptune, Mercury trine Uranus)

Friday, Jan 4
Quadrantid Meteor Shower
Access tremendous power for constructive change, have plans made up in advance.  Even though it’s a Friday, it’s a good day to make things happen.  Don’t be so severe with the ones you love the most.  (Mars quintile Pluto, Venus semisquare Saturn, Moon square Mars)

Saturday, Jan 5
Partial Solar Eclipse (late Saturday, early Sunday the 6th)
Don’t be too surprised at a little disorientation or strangeness today perhaps followed by a shock game-changing revelation over the next day or so.  This eclipse is conjunct the fixed star Vega, which is considered to be of good fortune.  Venus and Uranus quincunx may also bring in new relationship factors to the equation.

Tuesday, Jan 8
Powerlessness drives anxiety, the fight or flight mechanism may be activated.  A sense of urgency may seize us, but the urgency may be a little exaggerated.  (Mercury square Mars)

Wednesday, Jan 9
Moon at Apogee 0429 GMT
Sudden shifts may stimulate ideas and new life directions.  Make sure though that the ideas for change are not just for change itself, or just to get out of a situation which seems “boring” but is still necessary to remain with.  (Jupiter sesquiquadrate Uranus)

Thursday, Jan 10
Reality may suffer fanciful augmentations, too good to be true, as they say.  (Moon conjunct Neptune, square Jupiter)

Saturday, Jan 12
Mercury at Aphelion (closest to the Sun)
Urgency and passion can drive the course of the day, conscientiousness is enhanced.  (Moon conjunct Mars, Venus semisquare Pluto)

Tuesday, Jan 15
Creative and artistic work is favored with Mercury on Vega one of the brightest stars in the sky

Wednesday, Jan 16
We’re in eclipse time, the Sun conjunct the North Node.  With the Moon moving through the Pleaides area some deep movements emotionally and spiritual are indicated, usually coincided with significant events in life.  Venus on Antares, the heart of the Scorpio, can have some interesting, if not deep developments in relationships.

Friday, Jan 18
Surprising new life developments may challenge your understanding of things.  Go with the flow though, what seems new, alien, or wrong may seem actually more close to the truth in a short time. People and situations can get into a good rhythm.  (Mercury conjunct Pluto, Sun square Uranus, Venus trine Mars)

Saturday, Jan 19
Situations may suddenly seem discouraging, but may actually require a stronger focusing of the mind to get through.  Break through defeatism.  (Sun semisquare Neptune, Moon square Mars, Moon opposite Saturn)

Sunday, Jan 20
We are moving into the eclipse late tonight or early tomorrow, the Earth’s shadow dimming the lunar light, the effects being disorientation and/or a feeling of strangeness.  Creativity and love may flourish in beautiful ways.  (Sun semisquare Jupiter, Venus square Neptune)

Thursday, Jan 24
Interactions may be animated, if not somewhat glib or superficial.  Strive for relevancy and honesty.  (Mercury semisquare Jupiter, Moon square Venus)

Tuesday, Jan 29
Cordiality and camaraderie are strong.  In the midst of some connections, surprises and upsets are possible.  (Sun conjunct Mercury semisquare Venus, Moon semisquare Pluto)

Thursday, Jan 31
Moon-Venus Occultation
The Moon makes extremely close conjunction (occultation) to Venus, enriching life and love.  Saturn and Neptune in sextile can help bring about a harmony between ideals and goals.