The recent “zero tolerance” policy of apprehending illegal immigrants seeking asylum and immediately separating them from their children, started in April 2018 by the Trump Administration, has boiled over. The fact that over 2,300 children have been forcibly separated in the last few weeks alone, along with the recent photo above, has turned the situation into a firestorm of outrage, denial, and then obfuscation and blaming of others.

Behind all the outrage is the moral reflection of “is this who we are”, that is, are these policies worthy of a so-called bastion of democracy, freedom and above all, enlightened law-enforcement. Stark political divides are drawn against compassion for the children caught in the middle, and those who say “tough luck” their parents shouldn’t have tried to cross the border illegally.

As of this writing, President Trump is about to sign an order to keep migrant families together, so maybe the forces of “togetherness” have prevailed.

If we look at the skies above us, clear astrological configurations overshadow the entire matter.

As the famous image of the child crying at an arrest at the border went viral on the Internet with the tremendous outpouring of compassion for the littlest of victims in the immigration situation, we had Neptune stationing. Neptune is the planet of compassion and unity, among other things. 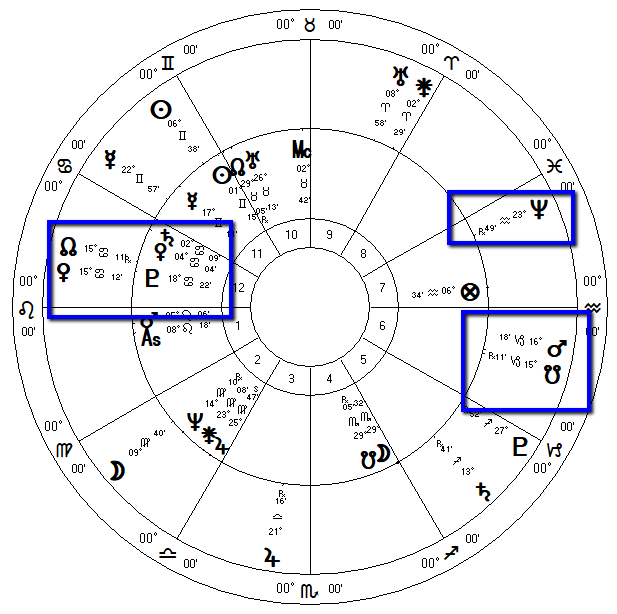 June 20, 2018 transits outer wheel, with Trump chart inner wheel, Mars, Venus, and the Nodes lining up with his natal Pluto

And then we have the configuration of Venus and Mars tightly lining up over the Nodal axis, it’s as obvious as anything in a horoscope. Venus conjunct the North Node in sidereal Cancer can act like a force for love, in this case family togetherness; while Mars conjunct the South Node in sidereal Capricorn can act as the harsh force for separation, citing all the expedient pragmatism of the matter.

Attorney General Jeff Sessions citing the Bible as their ultimate rationale, obviously cherry-picking scripture, and then Trump and the spokespersons for the Administration blaming the Democrats for obstructing the laws (factual or not), creating the precedent, and/or being soft on immigration; all of these point to the also-Neptunian obfuscation, delusion, and self-absolution by projection of blame.

In just a few days (as of this writing) Mars will be turning retrograde within one degree of Ketu (South Node), and within two degrees of opposition to Trump’s natal Pluto. Mark your calendar to see potential fireworks with the White House: Tuesday, June 26.