Definitely Not An Angel

Triple Conjunction of Venus, Juno, and Pluto; and Predictions

This week there is going to be an amazing triple conjunction of two love planets with Pluto.  There may be pivotal moments in many relationships this week, specifically on Wednesday, January 16, 2013.  The love planets I refer to are Venus and Juno.  Juno is not a planet, but an asteroid that does have a correlation with relationship issues.

The planet Venus in my observations is a more reliable relationship astrology indicator, however, Juno can only reinforce the larger picture of Venus exactly conjunct Pluto.

Whatever planet is touched by, or touches Pluto, it’s energies become strongly intensified in our affairs, making us act almost compulsively or uncontrollably regarding its nature.  For instance, when Mars and Pluto connect, actions and motivations go overboard, people will tend to push the envelope, and violence, injury and destruction become a much more probable occurrence. 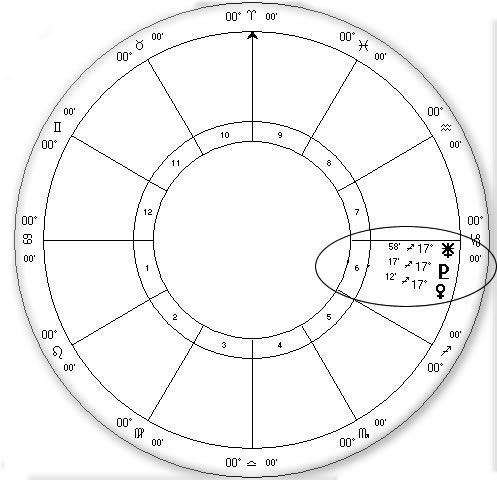 Therefore when Venus conjuncts Pluto, the love nature in us is heightened, and the oneness we may feel with family, friends, and lovers will be intensified almost beyond belief, as well as sensuality greatly enhanced.  The danger is that the greatly intensified emotions felt may tend to skew or distort the actual reality of the love situation; the experience is so visceral that people will start to engage with deeply internal psychological forces within them and end up projecting them onto other people.

In effect, during a Venus-Pluto occurrence we may connect with our most deeply seated hopes, desires, and fantasies, and experience a profound sense of gratification.  However the other person involved may indeed facilitate the experience, but it is not guaranteed that they would be the actual cause of it.  The experience is mainly internal, or subjective, and so intense as to overwhelm a natural sense of realism, perspective, or appropriateness.

Interestingly, this triple conjunction of Venus, Juno, and Pluto will be also exactly sextiled by Saturn; which may go a long way to delivering some of that much needed realism, perspective, or appropriateness here.

But if there is no apparent romance going on with you, I would bet that your emotions and reactions in general to things will be much deeper than usual, hopefully motivating you in all the right ways.  Pluto tends to light up our “naughty” side, make us want to go where angels would fear to tread.  Pluto, according to myth, was definitely not an angel; in fact he was on the other end of things, living down below as the god of the underworld.

According to Greek myth, Pluto was the son of Saturn (Chronos), and the brother of Jupiter and Neptune.  Pluto, as opposed to Jupiter, was very monogamous with his wife Prosperina (Persephone).  So there will indeed be a coming together of mythical figures with vivacious Venus, somewhat conservative Juno (or Hera, the long suffering wife of Zeus/Jupiter), and somewhat off-the-deep-end Pluto this week!

Monday, Jan 14
Intense relationships/marriage/love issues will be coming up, getting together may be quite a powerful influence today.  Debate and discussion may be somewhat intense, adding to an overall feeling of stress throughout the day.  (Juno conjunct Pluto, Mercury quintile Saturn and Uranus)

Wed and Thurs, Jan 16-17
Over the next two days relationship and love issues should be highly in focus: new relationships beginning, present relationships intensifying their love, and maybe old relationships rekindling the flame.  Strong issues of attraction, deeply complex karmic ties asserting themselves, and urges and motivations in relationships that are not easily contained or controlled may be brought to the surface.  The sextile from Saturn to this triple conjunction of Venus, Juno and Pluto may prove to be sustaining, moderating, and letting things remain workable.  (Venus conjunct Juno conjunct Pluto, all sextile to Saturn)

Friday, Jan 18
Adventuristic endeavors in love and other affairs are indicated; be sure that things said or done now don’t come back later to you causing regret.  (Mars tridecile Jupiter, Venus biquintile Jupiter)

Saturday, Jan 19
The Sun and Mercury move into sidereal Aquarius, a shift in everyone’s affairs may be noticed.

Monday, Jan 21
Intriguing, inspiring, and stimulating relationships may occur here; but be careful of big promises or grand gestures from those who are here today, but gone tomorrow.  (Juno biquintile Jupiter)