Brett Kavanaugh’s vedic astrology shows his nomination to the US Supreme Court has been contentious to say the least. The recent allegations of a sexual assault thirty-five years prior by Dr. Christine Blasey Ford have put the process into turmoil.  As of this writing in late September 2018, it would appear that Kavanaugh will successfully go to the next stage of nomination, that is, if the limited FBI investigation ordered by President Trump does not bring out anything significant.

There is no published birthtime of Brett Kavanaugh to produce an actual horoscope, but there is a technique in Vedic astrology which uses the sign of the Sun as the first house, used in the event of not having a birthtime for the individual.  It is called Surya lagna (Sun ascendant) and I have found it to be rather powerful in delineation of individuals.

This article will use the Feb 12, 1965 birthday of Kavanaugh in Washington, DC.  There have been several rectified charts made of him, but the Surya lagna method itself delivers a simple solution; i.e. there is no debating where the first house is in this chart.

Most certainly conservative readers of this article will believe I’m a liberal, and most certainly some liberal readers will think I’m conservative.  Astrology I find cuts right through the middle of polarizing situations.  I endeavor to remain objective. 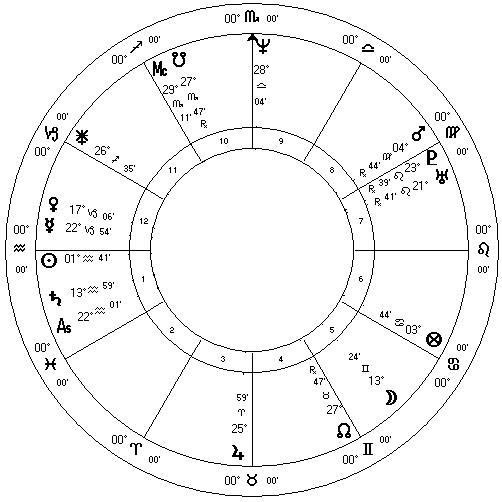 Kavanaugh’s Sun and Saturn in Aquarius denote a strong drive towards justice and a universality of enlightened laws, such as a judge should hopefully be predisposed to be.  Such a combination can make one appear very serious, disciplined and industrious, but almost to the point of overwork at times.  The “off” switch kind of gets broken at times.

Generally, this type of individual can have a somewhat awkward, difficult or problematical early first half of his or her life; as one is unyielding on oneself, eventually the rigidity is going to break and some surprising lapses in the standards can appear occasionally.  Discipline turns into wild abandon; respectable becomes disreputable, and so forth.

The Moon in Gemini indicates a versatile, intelligent and communicative nature; one who formulates thoughts into statements, such as what judges do with their decisions.

Mars in Virgo indicates a determined effort to codify those thoughts into purposeful rules, laws and regulations that make life more efficient.

Jupiter in Aries denotes a certain impetuous zeal and daring, maybe taking things a little too far at times; albeit Mars disposing Jupiter in Virgo calms that down somewhat, seeking to channel the energy constructively.

Mercury in skeptical Capricorn takes the energy of the Moon in Gemini and again strives to channel it into constructive and ambitious directions.  Venus in Capricorn is a little reserved in its expression of love, but it has a dutiful sense to it.

Venus and Mercury in the twelfth house from the Sun (Surya lagna) can indicate a certain clandestine nature to one’s love life; i.e. the skeletons in their closet can have to do with relationships.

The Sun as the seventh house ruler, here debilitated twice over in Aquarius and conjunct Saturn, may indicate some sort of dysfunction in marriage and relationships.  As would Mars in the eighth house disposed by Mercury (conjunct Venus, the significator of relationships) in the twelfth house; i.e. there could be some sort of destructive force at work manifesting in his relationships.

Mars in the eighth can indicate a short of recklessness in regard to life energy, one who “works hard and plays hard”, which ultimately shortens the lifespan or produces significant threat to oneself (and others by extension).

Technically, this forms a positive planetary combination (vipreet raja yoga) which takes a very bad thing in life and turns it towards great success and accomplishment.  This is not always a sure thing, but it is an indicator of a great comeback in life.

Mars in the eighth, Sun and Saturn in the first and Jupiter in the third houses, indicate a potentially very formidable individual, one who will dare much and go far in life, if he/she doesn’t destroy their self in the process.

The Nodes in the Taurus/Scorpio axis disposed by Venus and Mars in the eighth and twelfth houses corroborates a “passionate” individual who may have to contend with his/her vices, but which ideally can be contentiously directed for significant transformational work both personally and trans-personally.

Jupiter in Aries and Mercury in the twelfth house can indicate a set of life-rules and philosophies that are self-serving, militant, and then self-rationalizing.  One’s conception of oneself is a universe unto itself, but potentially very self-deceived.  Intrigues and deceptions may blemish his reputation.

Maybe in his youth, Kavanaugh could have struggled with baser impulses, but as he got older he matured and straightened out his ways.  This late-maturing quality corroborates the Sun-Saturn motif in the first house, as well as the vipreet raja yoga mentioned above.

At this time, September 2018, transiting Jupiter has been opposing his natal Jupiter, highlighting his life-philosophies, but also his potential excesses and abuses in life. Then also his Zeus-like thunderousness, reacting to challenges to his power and reputation.

Transiting Saturn is now in opposition to his natal Moon, which will be in tight aspect for the balance of the year, indicating stresses and challenges overall, bringing greater scrutiny to his personal life.

Pluto right now is making a station directly on his natal Juno, the asteroid of relationships.  The hidden relationship dysfunctions are bubbling to the surface.

If one looks closer they’ll see transiting Neptune is conjunct this (rectified) ascendant degree, and opposed natal Uranus and Pluto in the seventh house.  Venus is squaring natal Venus and the Sun is squaring his natal Moon (for this day September 29, 2018).  It is certainly crunch time for him.

Returning to Jupiter it is about to enter is tenth house in early October 2018, pretty much favoring his nomination and tying into the idea that he has now “arrived”. 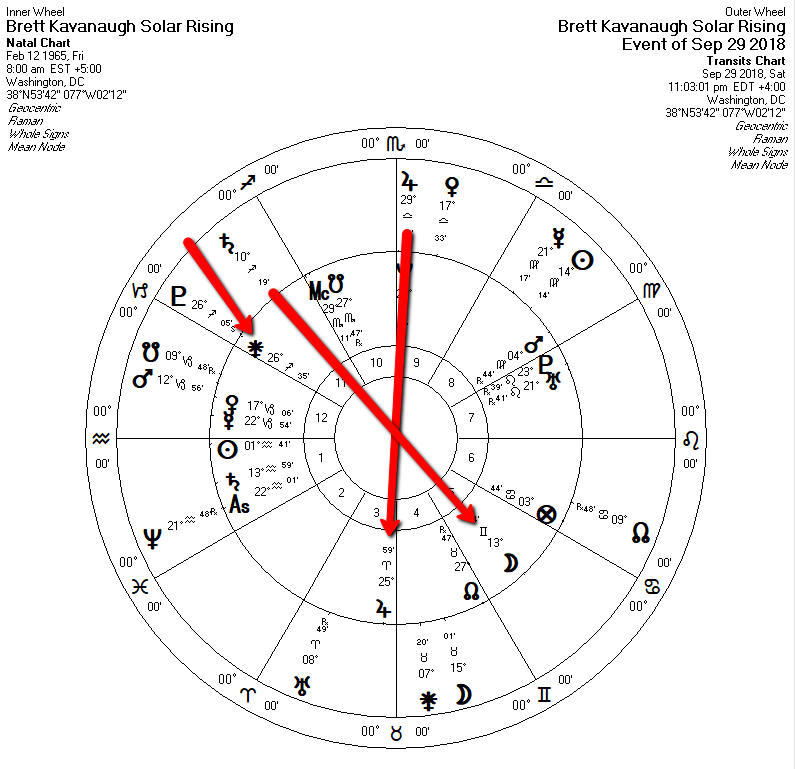