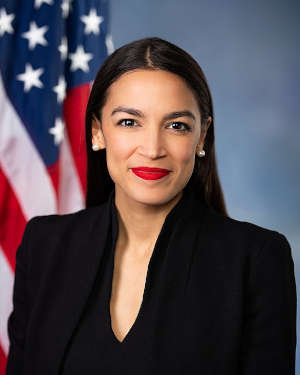 In November 2018 Alexandria Ocasio-Cortez, also called AOC, won the upset victory over incumbent Congressman Joe Crowley.  In only a few short months she has had meteoric rise to fame, of both the positive and negative sort.

Some say that she could make a run as President when she is 35; others say she represents a great danger to the country politically.

This article seeks to see her life through the lens of Vedic astrology, using the sidereal zodiac and her verified birthtime of Oct 13, 1989, at 11:50 am in the Bronx, NY.  I endeavor to be objective.

Starting first with her Sun, Mercury and Mars conjunction in Virgo in the eleventh house giving full illumination on a Moon in Pisces in the fifth house indicates a practical, informed, and aggressive approach to life; proactive, but visionary and sensitive to the needs of others. 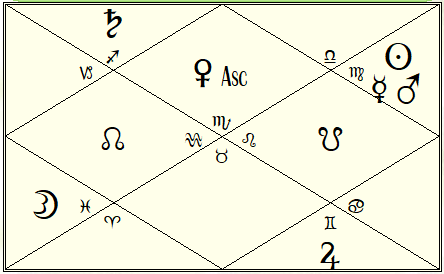 The constellation of Virgo itself, that of the ancient Greek goddess of justice Astraea, brings to mind this kind of archetypical female figure.  With AOC also having a very strong Venus in Scorpio in ascendant adds to the magnetic charm of such a female figure.

Mars in Virgo disposing (ruling) her Ascendant sign helps to give concrete focus to her energies and drives.  Scorpio rising seeks to penetrate illusions and gives her the wherewithal to effect significant transformation in oneself and by extension the world.

Saturn in ideological Sagittarius in the second house gives expression to her politics and philosophies, coming out strong, but perhaps too strong at first, taking that Saturnian long-road to refinement.  She grew up without great affluence, having to work her way through life, paying the working person’s dues which shaped her economic outlooks.

Jupiter in Gemini, at first debilitated in that sign, but then having canceled debility (neecha bhanga) with its disposing planet Mercury angular to the Sun, gives great expressiveness, however sometimes glib or broad-brushed as it may get.  Such a powerful Jupiter in the eighth house in time can produce a significant player in the arena with great good fortune at her disposal.

Saturn in aspect to her Jupiter (as well as her Sun, Mars, and Mercury), however, is not going to make it easy for her; possibly bringing her down a few pegs now and then.

Returning to her Venus, it’s debility in Scorpio is also canceled by it’s disposing planet, Mars, angular to the Sun, giving great personal presence and the ability to succeed at her endeavors.

So, while there is great success indicated in her chart, that success requires equally significant challenges to ignite those potentials in her life.  Saturn and Mars in mutual Vedic fourth/tenth house Vedic aspect to each other provide that drive to overcome, persevere and be determined, which can also be seen in the amount of criticism she receives on a constant basis, not necessarily thwarting her, but fueling her drive.

Ketu (South Node) in the tenth house in Leo gives a charismatic but also misunderstood public perception.  She is regarded as a renegade or almost “heretical” in her stance, possibly an existential threat to the present order.

The North Node, Rahu, in Aquarius in the fourth house gives an honest compassion for all and desire raise the whole lot of humanity, to help others to work together towards common goals; hence her political activism.

Uranus as the focal point of a tight t-square to the Moon and Mercury highlights her activist flare, naturally sort of an iconoclast.  There is actually a full grand-square in her chart, a very ideological and “progressive” one, which may take some experience before it manifests its full potential. 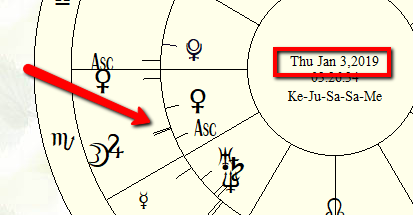 Ocasio-Cortez’s coming into office (January 3, 2019) and her rapid rise to prominence occurred as transiting Jupiter (and Moon) was moving directly over her ascendant degree, so things got boosted really quick with that occasional (Zeus-like) Jupiterean flair.  With her ascendant in Scorpio, we can readily see that notoriety can be a sword that cuts both ways; for every accolade, there is equally strong opposition and ridicule.

With clockwork timing, her election victory occurred just as her Jupiter sub-dasa started.

With this dasa timeline we can see that life is an amazing adventure for her right now with the Jupiter subdasa; but as the Saturnian subdasa follows in Oct 2019, the pressure will really turn up, testing her ideological soundness significantly.

The subsequent Mercury sub-dasa in December 2020, just after the election could indicate a successful outcome electorally, but the campaign will occur under Saturn’s harsh and grueling effects; the Republicans may devote a lot of time with hard-driving tactics to try to win the seat back.

The commencement of her new maha dasa of Venus in 2021 could be interesting.  Venus ruling her seventh house could indicate marriage personally for her.  But Venus also ruling the twelfth house in her chart, this could also indicate a very long twenty-year period of subversive influences trying to destroy her effectiveness.  Then again it could indicate a new level of compassion and spirituality in her life, perhaps spurred in reaction to her trials in life. 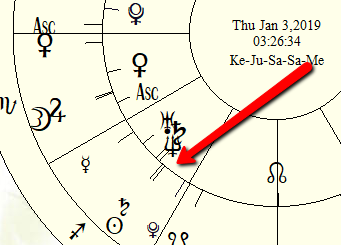 Oasio-Cortez first Saturn return occurring as she was campaigning for her election.

Lighting up her first house, however, this upcoming Venus maha dasa running from 2021 to 2041 could indicate very strong personal achievement and success, recalling it’s enhanced dignity mentioned above.  Aiming for the White House?

The first subdasa of Venus is the Sun, which represents potentially a position of authority as well as prominence, would occur for her in 2025, just as she becomes 35, the Constitutionally mandated youngest age a US president can be.  If not the White House, possibly some other position like the head of a Congressional committee, etc.

She also has undergone her first Saturn return, just now behind her.

The Saturn return occurs at critical junctures usually in a person’s life: just as public identity is being formed, just before one’s 30’s, and then once again as career has the opportunity to be honored, just before 60 years of age.

This calls to mind the picture of the pair of shoes she wore during her campaign, literally showing how she “walked the walk” out-electioneering her opponent, a long-time incumbent who probably just assumed he would win.  Her very-mobile Sun-Mercury-Mars conjunction responded to the Saturnian turn of her life.

The Neptune Factor with Ocasio-Cortez 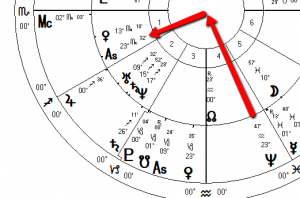 Transiting Neptune now in tight square to her ascendant calls to mind potential naivete, delusion or unfounded optimism on her part, which some might attribute to her so-called radical agenda, claiming it to be hopelessly unrealistic and/or steeped in some kind of envio-socialist propaganda.

Neptune square her ascendant should also be considered in the light of the intense character maligning that she receives in the media, and then the idolizing of her by those on the left. A hard aspect from Neptune skews biases and perceptions. 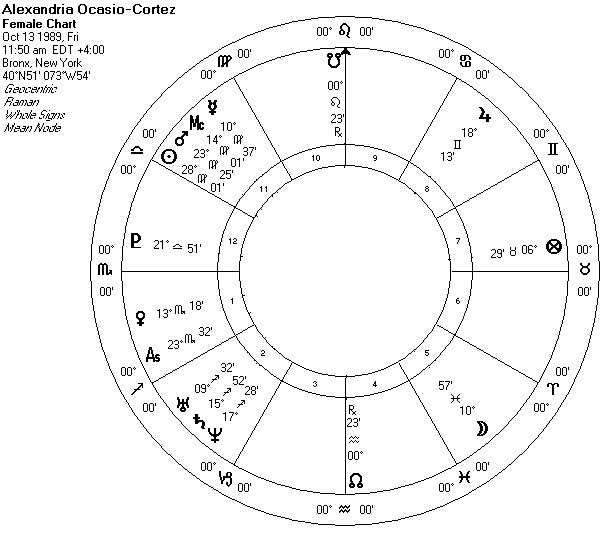