Over the weekend of Aug 24-26 there will be a unique exact configuration astrologically: Venus and Mars will form quintiles to each other (72 degrees), while both simultaneously biquintiling Neptune (144 degrees).  This configuration will be reinforced by the opposition of the Sun and Mercury to Neptune, forming an exact bisection of the angle between Venus and Mars.

The effect of Neptune upon the entire array of planets will cause disclarity and create situations of perceived disempowerment, which may bring out deceitful, addictive, or deceptive qualities in people and situations.  While at the same time Neptune will provide transcendent upliftment and sublime realizations and actions on the part of many. 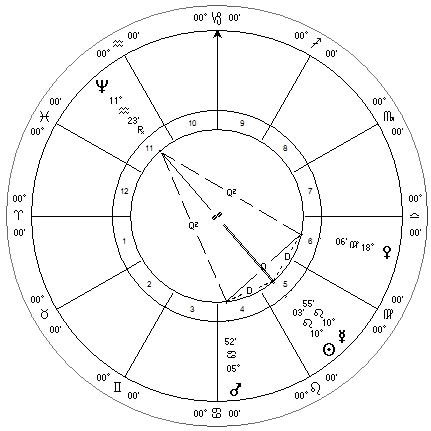 Neptune may also have a hand in difficulties with water, fluids, oils, and chemicals.  Chronic conditions of health may be brought out, and people may not be acting  in the fullest integrity that they could be.

A friend of mine brought to my attention that this weekend is supposed to be a grand trine of planets, which will coincide with a sort of spiritual awakening.  I took a look and I really didn’t see a grand trine, except one with wide orbs, and having to resort to using the Nodes (not real planets) as a leg of this grand configuration.

While I found a similarly-themed configuration in the sky as highlighted above, the alleged grand trine is on shaky ground according to my criteria.  All in all, another example of the pseudo-science that astrology can become in the hands of people with not very much analytical rigor to their methods.

The configuration I’ve cited and provided an image to is based on tight fifth and tenth harmonic aspects; 36, 72, 144, and 180 degrees.  These are aspects seemingly hidden from our discernment unless we use computers to spot them.  It is configurations of geometrical and mathematical precision like this which I have seen time and again to proved the real bumps, turns, and life developments to us all.

Sat and Sun, Aug 24-25
Emotions may soar, while at the same time have great depth.  Energies may waver, and it may present difficulty to walk the straight line in thought, deed, or word. (Venus square Pluto, Venus quintile Mars, Mercury opposite Neptune, Venus and Mars biquintile Neptune)

Monday, Aug 26
Early on relationships may need to work through issues, refining and establishing the true bonds of love.  There may be emotional excitation, yet it may be difficult to act with honor toward one’s best interests.  Energy, motivation and will power may be undependable.  Persevering sorts however will find sublime fulfillment.  (Juno square Saturn, Venus opposite Uranus, Sun opposite Neptune)

Tuesday, Aug 27
Impulsivity, agitation, and dissatisfaction may be high, which will incite actions.  The energies of which if they are kept properly bridled will move one to better places, which will otherwise create needless drama, hysteria, and potentially violent commotion.  Be careful about squandering of precious resources of time, energy, and money into ventures that ultimately prove frivolous; however social, artistic and cultural endeavors will be highlighted.  (Mars tridecile Uranus, Venus square Jupiter)

Friday, Aug 30
Discussions and investigations should be profitable and enlightening.  The course of affairs today should be relatively smooth.  (Sun sextile Saturn, Mercury sextile Jupiter)

Sunday, Sept 1
Personal power may seem to take on compelling force, and one should be conscientious in the manner and motives for one’s actions.  Be careful of misusing and abusing things, situations, or people.  Love may suffer ups and downs, betrayals and disappointments; others may draw seeming inspiration from situations or other people, romantically or otherwise, but motives are delusionary and escapist bound to produce sadness in the end.  (Sun trine Pluto, Venus sesquiquadrate Neptune)

Monday, Sept 2, Labor Day
Urgency or alarm may seize key moments today, possibly causing confusion and unrest.  Be careful that motives are true, not delusionary or malicious.  Energy and vitality may feel at a low ebb.  Mishaps and misfires are possible, causing delays and problems.  Patience may be a vital, but precious quality today.  (Mars quincunx Neptune, Mercury semisquare Mars)