Neptune turns retrograde this week on Friday, June 7, 2013, and it will also be getting a very strong kick from a highly activated Mars at the same time.  Turbulence could be very high, significant developments in life could be forthcoming.

Whenever a planet in the sky takes on the appearance of stopping its regular movement and switching its direction (called a station in astronomy), this is when a planet in astrological terms tends to deliver its effect very potently.  Planets do not actually switch the direction of their orbital movement, but due to the relative positions of the planets revolving around the Sun, they take on the appearance of moving backward, or retrograde, as it’s called.

Neptune being one of the outer planets of the solar system, moves very slowly in comparison to the planets of the inner neighborhood.  The slower a planet moves (if only by a relative measure) the deeper and more foundational a planet’s effects can have on our psyche.  So we are about to experience Neptune very significantly.

Neptune as the mythical Roman god of the sea, was brother to Jupiter and Pluto; each making the god of the sea, the sky, and the earth (or underworld) respectively.  To the Greeks this god was called Poseidon.

The effects of Neptune I find to be very subtle, encouraging sensitivity in those already inclined, and for those of less sensitivity (more grounded in the carnal-human experience) it has a disembodying, alienating, and disorienting effect.  Basically it separates our consciousness out of the so-called normal world of materiality, where man is just a cog in the social machine; and thrusts us into something far more transcendent, godlike, and cosmic in dimension.

This omni-dimensional state stimulated by Neptune astrologically is the native realm of the soul anyway, and it’s Neptune’s task to integrate us with our more subtle parts.

As a soul consciousness, which has been so long enmeshed and disempowered within a matrix of human bodily limitations and mental proscriptions (the things that make us small and “insignificant”) to be so suddenly removed from the normal sense of familiarity (and its comfort), this can cause reactions of anxiety, uncertainty, and despair.  These emotions many times accompany different sorts of Neptune transits or progressions in life, as measured by modern astrology. 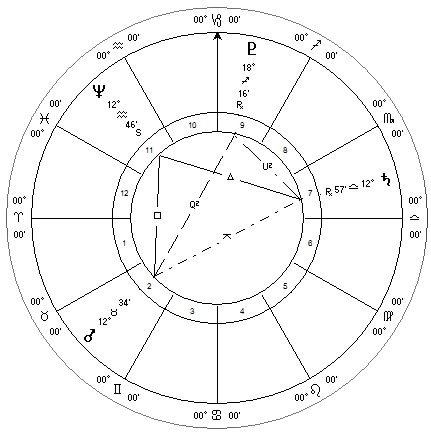 Neptune is also tied up with liquids such as water and oil (associating with the god of the seas) and toxins and intoxicating drugs and substances; all of which give us a false sense of happiness, contentment, or even of the higher ecstasies of life.  Therefore Neptune is also significantly configured in the charts of people with substance abuse issues in their life, such as Robert Downey Jr. who has the Moon exactly opposite Neptune.

This upcoming Neptune transit will be greatly compounded by the fact that on the same day as it stations, it will be exactly squared by Mars, which itself will be receiving aspects from Saturn and Pluto.

This could be a very strange, unsettling, and shocking weekend upcoming in many ways.  The level of intensity should be very high against a backdrop of Neptune’s reality bending-dissolving power, which may wreck havoc with our emotions, immune systems, relationships, and egos; not to mention cause all sorts of bumps, bruises, or worse.

But can’t just hide in our beds during this time, we have places to go, people to see, and stuff to do.  Courage may be demanded of us, as well as the ability to address situations which we may not in the least feel capable, adequate or inclined to do so.  Be careful.

Now there is a good side to this, right?  Of course, there always is.  We have the opportunity to exercise our discernments about people’s motivations and intentions (since Neptune also rules deception), see the consequences of good and bad decisions, find inspiration to do the right thing, and pull out of seeming nothingness the courage to champion causes for the liberation of humanity from the oppression of fear, superstition, and ignorance.

You might notice that in the chart posted above that Saturn has sneaked up and formed a trine to Neptune, somehow saving us from the worst of things, adding elements of control and manageability.

Wednesday, June 5
Minor issues of love in relationships may be tested, sometimes seeing the other person as mirroring one’s vanities.  (Venus sesquiquadrate Juno)

Friday and Saturday, June 7-8
These days will be the peak of the situations outlined in the introductory paragraphs at the start of this article.  Some people will of course be experiencing them in far more tangible and visceral ways, while others may be sorting through confusing motivations and varying levels of energy and enthusiasm.  Some might feel very low indeed, others fully seized by whatever passions grip them, but who knows what is really going on.  Conscious awareness of what is going on may be a most elusive thing indeed.  What seems real may fantasy, what is fantasy, real.  Frustrations may be very deep, but great determination may arise as well.  (Neptune retrograde, Mars square Neptune, biquintile Pluto, quincunx Saturn, Venus trine Saturn and Neptune, Mercury opposite Pluto, Saturn trine Neptune)

Sunday, June 9
Important relationship issues are brought out, power and control within them.  Passion may be strong.  (Sun trine Juno, Mars biquintile Juno)

Monday, June 10
The day may be afflicted by delays and obstacles to overcome.  Tempers may be short and an acute sense of offense or injustice may make egos touchy.  (Sun sesquiquadrate Saturn)